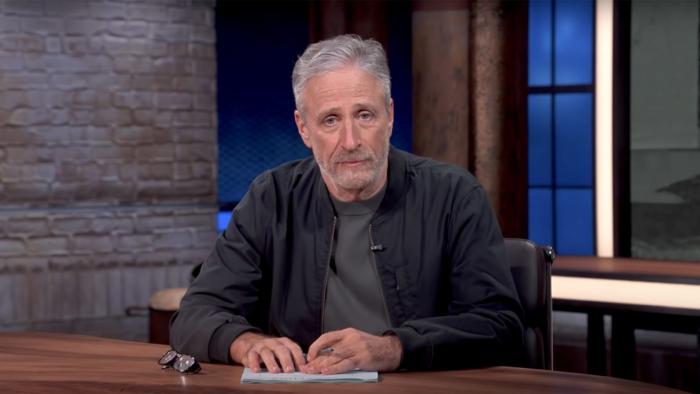 I think that John Oliver and his Last Week Tonight crew are the best in the business now, and they have the Emmy wins (and Oliver has the Pajiba 10 appearances) to prove it. When Jon Stewart announced that he was returning to television in Apple TV+’s issue-based The Problem with Jon Stewart, I expected it to be one of those situations where the student had surpassed the teacher. It’s not quite that because while Stewart isn’t doing anything particularly original with his program, they are different shows.

Each week, John Oliver and his brilliant team exhaustively research a new issue, and Oliver relates that issue to us in a way that we can easily understand and digest by combining facts with jokes and pop-culture references. This week’s episode, for instance, tackled dangerous PFAS chemicals (the chemicals in our non-stick pans), which might sound like a painfully uninteresting subject, but Oliver has a real knack for educating while entertaining. Still, as gifted as Oliver is, he often approaches his topic from an arm’s length.

In The Problem — based on the first two episodes, at least — Jon Stewart is more engaged with his subject, although that may be because Stewart hasn’t yet run out of topics in which he has a personal passion. In the opening episode, for instance, Stewart covers a subject in which everyone knows that he is personally invested: Veterans. Specifically, veterans exposed to dangerous chemicals from burn pits in Iraq. I knew nothing about burn pits, where soldiers would get rid of their waste — food, human feces, nuclear waste, toxic chemicals, etc., etc. — by dousing it in jet fuel and lighting it up in close proximity to their military bases. I don’t know why it wasn’t obvious to anyone at the time, but that’s dangerous, and there have been hundreds (or thousands) of soldiers who have returned from Iraq with everything from asthma to lung disease to various cancers. Veterans Affairs has refused to provide medical coverage for most of these conditions, however, because — beyond simple common sense — a definitive link between exposure to these burn pits and their illnesses has not been proven.

Stewart covers the ins-and-outs of the issue in a fashion similar to The Daily Show or Last Week Tonight, but then he also brings in a panel of former servicemen and women who have been affected by burn pits and talks to them about their stories. He puts a face to the issue, and then he interviews the Secretary of Veterans Affairs and puts his feet to the fire.

It’s more 60 Minutes than The Daily Show, but instead of being reported on by a sober newsperson, it’s reported on by … well, Jon Stewart. He doesn’t mix his reporting with jokes and pop-culture references as Oliver does, but he does offer a lot of personality, although your mileage may vary depending upon what you think of Jon Stewart’s personality.

The second episode, which airs next month, addresses an issue more in the wheelhouse of The Daily Show: The hypocrisy of right-wing idiots demanding their freedoms but refusing to make the sacrifices that previous generations made in order to earn those freedoms. They’re prioritizing personal freedom from masks and vaccines over the collective freedom from a dangerous virus. He then speaks to a panel of folks from around the world — Bassem Youssef, a former political prisoner Francisco Marquez, and Maria Resser — who have actually been deprived of their freedoms. That, too, is a fascinating discussion.

The big question, I guess, is why? Do we really need the perspective of another middle-aged white guy? Putting aside his diverse writers’ room — which has an onscreen presence in the series — the answer is probably … not really. But just because it isn’t necessary doesn’t mean it’s not good, and for what it is — 60 Minutes with a profane, self-deprecating host — it is good. It is not a new perspective on the same old issues, but it is a familiar perspective on issues like burn pits and personal vs. collective freedom that are otherwise rarely covered. My guess, however, is that Jon Stewart is no longer relevant enough to break through all the noise, and unlike Last Week Tonight, there’s little in The Problem with Jon Stewart designed to gain traction on social media.

The other issue is this: There’s nothing visually interesting about the series; it’s mostly a series of conversations. The entire show would have been better suited to the podcast format. Audiences would be more amenable to a 45-minute episode about burn pits at 1.7x speed in their cars or on a long hike in the woods than competing against Squid Games or Ted Lasso on our television screens (for the record, there is a podcast supplement to each episode, where Stewart discusses these issues even more in-depth with different guests).


← Stephen Colbert Enlists David Harbour To Promote A Hilariously Haunted Sponsor | As If Another Reminder Was Needed: Screw Facebook →