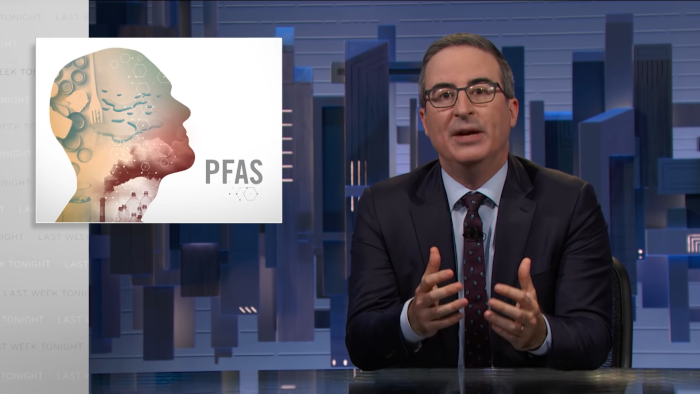 Non-stick pans are truly a modern marvel. Gone are the days of prying your burnt fish filet from a metal surface with a fork. Now you can watch it slide onto your plate and enjoy it with some lemon rice, a few chips, and a healthy dose of cancer-linked chemicals that will stay in your system long after you die. These chemicals are called PFAS. As John Oliver explained in the newest episode of Last Week Tonight, they aren’t just on your favorite saucepan, either.

PFAS are found in almost everything. That’s the biggest takeaway from this segment. Not only are they found in Teflon pans, but they are also found in drinking water, Subway sandwich shops, and 99 percent of Americans. I don’t believe those last two are linked, but I can’t prove otherwise. These chemicals can travel through the air, and despite chemical companies like Dupont being made aware of their dangers years ago, nothing was done to prevent further harm.

It’s hard to put a smiling face on this particular bit. Instead, I found myself going to ewg.org/pfasmap to see if there were any in my local drinking water. Luckily I’m in NYC, home of the champagne of drinking waters. At least that’s what I’ve heard from several mainstays at my corner bodega. However, I did find a source of PFAS in drinking water located across the river in New Jersey. I won’t even use this as an opportunity to make fun of New Jersey, and boy do I want to!

While this reporting from Oliver and crew does feel particularly dire, they still manage to soften the blow in the end. I won’t spoil it, but this segment ended with a hilarious cameo. In a way, it let the story slide off of my body like it’s finally taking advantage of the Teflon I have likely ingested over the years.

[Editor’s note: Yes, this is the plot of the Mark Ruffalo movie Dark Waters, and yes, you should watch Dark Waters. Now on Showtime.]