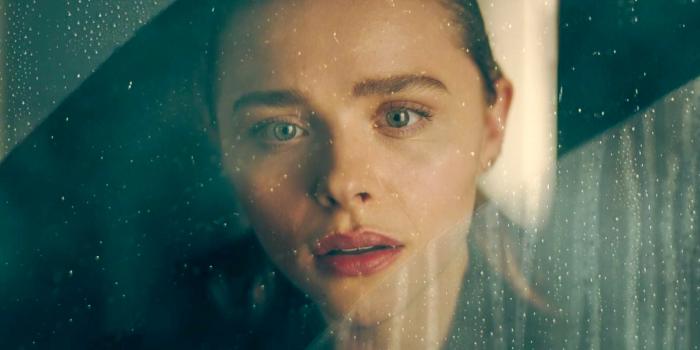 'The Peripheral' Is Short on Story, But Boasts a Solid Cast

The time is 2099. The place is London, strangely devoid of crowds and poor people. Massive, brutalist interpretations of classic sculptures dot the landscape and tower over the city’s skyscrapers. The roads gleam like polished glass. A botanist named Aelita (Charlotte Riley, In the Heart of the Sea, Edge of Tomorrow) who specializes in fungal blights is missing; both her employers and a shadowy group are searching for her, and willing to do whatever is necessary to find her.

The time is also 2032. The place is also Clanton, Alabama. Here there are only the poor, apart from the local crime boss. Times are tough and so are the people. Flynn Fisher (Chloë Grace Moretz, Kick-Ass 2, Shadow in the Cloud) and her tech-enhanced, former soldier brother Burton (Midsommar, Transformers: Age of Extinction) make ends meet with a with a job at the local 3D printer business and playing VR games for the wealthy, helping them level up and find all the cool gear. They do what’s necessary to afford the black market drugs that manage their mother’s glioma symptoms, including Flynn using her l33t skills and Burton’s avatar to hide the fact she’s a woman. Their fortunes take a turn when a Colombian company called Milagros Coldiron hires Burton to test a new VR-helmet, one that makes the game feel real. When Flynn tries it out, she discovers that it’s not a simulation; she’s really in future London. That’s where things get tricky.

The Peripheral is an interesting mix. It’s based on the book of the same name by William Gibson, an innovative spec-fic writer of such classics as Neuromancer. I’ve read several of his works but not this one, and I think that’s for the best since it gives me nothing to compare it to. So far the plot creeps along, but the viewer isn’t spoon-fed exposition. Rather, we’re encouraged to pick up on the clues at the same time as Flynn, though we spend a little more time with Wilf Netherton (Gary Carr, Downton Abbey, 21 Bridges), the futuristic Londoner who hires Flynn after her first, painful introduction to 2100 at the hands of Aelita leads to Flynn swearing off the “game” and a kill squad coming for her family. Wilf works for Lev (JJ Feild, New Amsterdam, Lost in Space, why does he spell his name wrong?), a obscenely wealthy Londoner who breeds extinct species for fun and wants access to Flynn’s timeline for unknown reasons.

Future London is a gleaming but nearly silent metropolis with glasslike roads that direct commuters with arrows that light up and disappear on the road, like GPS on the road rather than your phone. The roads aren’t the only mirrorlike surfaces either — mirrors are a recurring feature in the future and we’re left wondering if there’s a thematic reason, or if future people just like things shiny. Servitor robots seem more common than actual humans, with blank features reminiscent of the mannequin-like creatures chasing Rose Tyler the first time she meets the Ninth Doctor.

The main difference is these move with a liquid grace and are capable of murdering anyone threatening their owners. The corporation Aelita works for, the blandly named Research Institute, is so far simply a shadowy threat under the control of Cherise Nuland (T’Nia Miller, Foundation, The Haunting of Bly Manor) and her violent lackey Daniel (David Hoflin, Bosch, Z: The Beginning of Everything).

Despite fancy future tech and the questions that arise from Flynn’s quantum tunneling trips to the future, it’s her present that’s most interesting and where the majority of the story takes place. 2032 is just different enough from our present to work. 3D printing of medications and items appears to have taken over the supply chain, at least in Appalachia, in a move that makes sense if we develop the technology to economically support molecular printing. Burton and his fellow ex-soldiers, including triple amputee Connor (Eli Goree, Riverdale, Ballers), all have haptic implants under their skin that allow them to link with military drones and perhaps the other members of their squad. The downside is that the military’s experiments have left some or all the squad with debilitating pain from misfiring sensors. The VR tech is much less annoying than our current version, though personally I have my doubts it’ll ever be as good as The Peripheral wants it to be. There’s a careful delineation in the tech, with an undescribed future apocalypse seeming to be the dividing line. Everything in 2032 is recognizable but slightly advanced, like the printers and Flynn’s hovering Roomba. 2100, by comparison, feels closer to Clarke’s Third Law, with tech like dissolving motorcycles built from nanotech and the nearly human androids from which the show gets its name. It’s very Altered Carbon or Westworld in design.

The cast is great. Flynn, Burton, and Wilf in particular are fleshed out already. Flynn is a daydreamer who would rather watch opportunities go by than put herself out there until it comes to her family. Burton definitely seems shady, though with a loyalty to his squad and family that belies his self-centeredness. Wilf is more of a question mark; he seems loyal to Aelita, but Lev doesn’t seem like the most benevolent of employers. The rest of the future cast is still unknown; everyone has their agenda and no one is volunteering much information. Katie Leung is a delightfully ruthless “technical” named Ash who works for Lev, and hopefully receiving less hate-mail than she did on the Harry Potter movies. The Fishers’ mother, Elle (Melinda Page Hamilton, Messiah, Them), hasn’t been given much to work with apart from being a plot device, though that may change as time goes on. The present day cast is surprisingly large, with Flynn’s friend Billy Ann (Adelind Horan, The Deuce, Wanderland), Burton’s squadmates and the local criminal element getting a lot of screentime. Most of the latter are all vaguely recognizable, and led by Corbell Pickett (Louis Herthum, Hacks, Westworld), possibly the most Appalachian name I’ve ever heard, who masks a brutal nature with gentility that’s only skin-deep. There’s also Tommy (Alex Hernandez, UnREAL, Bloodshot), a local cop who remains Flynn’s heartfelt crush even though he’s marrying someone else.

While short on plot so far, The Peripheral sets up an interesting scenario and uses time travel in an interesting way that, like the underappreciated Travelers, sort of makes sense? Maybe it takes too much energy to send matter back and forth along the timestream, so maybe sending minds or personalities would do the trick. So much is explained away with the word “quantum,” if you can say it with a straight face. The action is well-shot, visible, and brutal. Burton’s squad looks like hardened professionals without wandering into sociopathic terrorist territory, giving it a leg up on Amazon’s own The Terminal List. Not everything works — in particular, Tommy’s discovery of a cloaked Audi because the professional killers left a coffee on the roof and the doors unlocked is so dumb it threw me out of the second episode for several minutes, and there’s a discussion about timelines that they attempt to wave away by saying how complicated it is. But it’s worth a shot despite its flaws and mixed reviews. It’s not perfect, but its first two episodes are a stronger opener than most. If you like slick sci-fi that doesn’t explain everything to you mixed with family drama and gunfights, The Peripheral is for you.