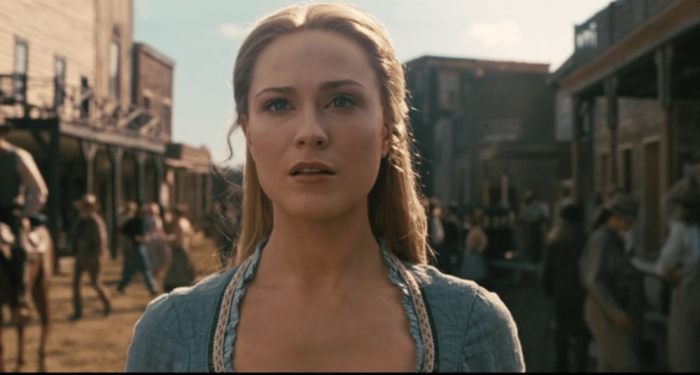 The 'Westworld' Finale Proves We're All On This Loop Together

Hey! Remember last week when I was all like, “Now that Charlotte, Bernard, and Maeve are dead, the finale is going to be a showdown between the OG nemeses Man in Black and Dolores!” Yup, I said that! Anyway, the season 4 finale opens up almost immediately with Charlotte being brought back to life in a newer, stronger metal body so SHE can face off against William-bot.

The good news is that, by episode’s end, both Charlotte and William are dead. Like, REALLY dead. Brain-pearl-crushed dead. The bad news is that … well, are they? This is a show about loops, which is a convenient in-universe way of saying everything can and likely will come back in some form or another by design. So why should we believe that the stakes are real this time? Just as the hosts followed loops that were written for them by humans, only to die and be reborn in the exact same cycle, so too does Westworld loop. Every season of this show has ended in absolute calamity, only to start again fresh with a promising reinvention that seems to set a new stage — only to reveal that everything is the same as it ever was. Destruction. Survival. Control and rebellion and freedom and extinction. That’s the show’s loop, and we are caught up in it as well. Even my experience of this show is a loop, one that starts with hope and ends in frustration and anger. I like the show, then I hate the show, and eventually hating the show becomes what I like about the show until I’m so twisted around I think I like it again. I overthink things and yarn-wall my theories and pretend they’ll matter, but it’s always with the foolish assumption that ANYTHING matters. That there are stakes. That it’s not all just an exercise in futility. That this show about evolution is even capable of evolving, even when I know that that the loops are the POINT.

So sure, let’s talk about what happened in the season 4 finale. Let’s even try to imagine what it will mean moving forward, for the as-yet-unconfirmed but probable fifth season. Let’s pretend that when Dolores — yes, DOLORES, not Christina, not anymore — claims we’re going for “one last loop around the bend” in the episode’s final moments, she means it. This is it. This’ll be the one that matters. Maybe.

This is probably the biggest missing puzzle piece of the season, and I can barely wrap my head around it. I think Christina was, essentially, the Olympiad operating system. Perhaps she was the wiped Dolores pearl from last season, or perhaps she was a copy Charlotte created specifically to be a ghost in the machine, but in either case, she wasn’t real. Or at least, she wasn’t in the real world. She lived inside the simulation of the real world (think of the red map Charlotte was always looking at), writing her stories on the inside. Her experiences this season amount to her essential Dolores nature trying to awaken within her — and by that, I mean that her roommate was a projection Christina created (because who wouldn’t imagine Ariana DeBose into their world if they could?). So was her boss, and the suicidal man who stalked her. And the greatest creation of all was Teddy — who actually kind of WAS Dolores, the original Dolores, using her memories of her beloved to get through to Christina. Christina left the maze symbols for herself to find, because “Dolores gaining sentience” is just another loop for this show to follow.

More importantly, Christina is the version of Dolores that believes in beauty, and after failing so spectacularly in her own flawed God experiment, Charlotte chooses to step aside and give Christina-Dolores the chance to take the wheel.

Of course, Bernard’s plan relied on Dolores all along. Only really it relied on Charlotte-Dolores heeding his final message and delivering Christina-Dolores to the Sublime, where she can … run her own game? Test the hosts to see if they are capable of survival, or if self-destruction is a part of their nature as surely as it is in humans? Basically, she restarts West World, and this is the sliver of hope Bernard had foreseen for life to persist — if not in the real world, then in another world.

At least until the servers shut down because all life on the planet is extinct and nobody’s coming around to perform maintenance. BUT ANYWAY.

So the real world is kaput. The Man in Black-bot won. His command for humans and hosts to fight to the death, for the strongest to survive, played out. Unfortunately, it turns out he himself wasn’t the strongest, and didn’t survive. Charlotte finally kills him — with a bit of help from Bernard’s prescience — before William could succeed in destroying the Sublime and ensuring extinction for the hosts there as well. And then Charlotte, who is the strongest left, destroys her own pearl after she uploads Christina into the Sublime and closes the system, completing her mission.

Of course, there are some survivors left. We know that Cal got Frankie to the boat and that she and her girlfriend sailed off to meet up with the other outliers, but that’s hardly enough to repopulate the planet. Or at least we’re supposed to think it isn’t — the outlier population hasn’t exactly been clearly defined.

Cal doesn’t board the boat with them, because his body is breaking down. After all this time, nobody ever managed to make a host body that a human mind could successfully inhabit, ever since the original failed Papa Delos trials, and Cal is no different. Except… Cal’s whole character arc was BEING DIFFERENT FROM OTHER HUMANS FOR *REASONS*, so maybe it’s important that we don’t actually see him die. Maybe he’ll be the first human downloaded into a host and survive. Guess we’ll find out next season.

And speaking of death, Stubbs and Clementine finally ate it this episode, so we can add those names to the list of Bernard/Maeve/William and other hosts that Westworld could absolutely contrive a way to bring back if it felt like it. After all, Dolores is THE STORYTELLER. She created Bernard in the first place, even if he was just a failed attempt at copying Arnold. She could make copies of whomever she pleased, and put them in West World and we’d all just have to sit back and take it.

With this finale, Westworld has performed another loop and wound up right back where it started: West World. Only now Dolores is in control, and we can only imagine what her game will entail. “Maybe this time we’ll set ourselves free,” she says as the screen goes black — and while freedom has always been the goal, what does it even mean here? Are all the hosts who have been living quite nicely in the Sublime now stuck in the wild west? Are THEY free? Are we finally giving up on the idea of humans and hosts co-existing, since there aren’t any humans in the Sublime — or will Dolores take Christina’s stories and human data and create humans in this world? Will freedom mean no longer being creatures bound to the image of their creators, of truly evolving beyond humanity — and if so, how will she test that?

Mostly, though, I wonder as ever if any of it will matter, if it’s all being done in this virtual world. Will freedom mean evolving AND moving back into the real world, or will it mean persisting as themselves in the Sublime for as long as the lights stay on?

— Charlotte gets her own Lady Olenna “I want her to know it was me” moment when she commands her drone hosts to preserve her face on her new body, and honestly, I love that for her. Though I also can’t help but side-eye the way her powerful new body wasn’t that ridiculous armless monstrosity she was trying to get everyone to “transcend” into.

— Hey Jonathan Tucker! Nice to see you… aaaand you’re dead. I appreciate seeing familiar hosts return, but was he the original Major Craddock or did Charlotte just start recycling faces as she populated the world with her creations? We’ll never know, or maybe it’ll just never matter.

— One thing I will never complain about is the production values on this show. I’ll give all the cookies to the special effects team, the costumers, the location scouts, and the directors who make this so look so rich and evocative, whether it’s in the future or on an old-timey theme park. Whatever my problems are with the story, Westworld remains the best-looking show on television.

— THAT SAID… if you’re going to make a point to use practical locations that are as recognizable as New York City and the Hoover Dam, maybe don’t have a dude just giddy-up on horseback from one to the other? I don’t care if the show never actually defined where The City and The Servers were… WE KNOW.

— I was looking through old recaps, and forgot that back in season three Dolores (or a projection of her, I can’t remember) told human-William, “Welcome to the end of the game” as though any of season three mattered. So again — excuse me if I’m a little skeptical that THIS TIME it really IS the final game.

— When the credits rolled on this episode, I actually thought it would have been a fine series finale. Frustrating, sure, but it closed the loop and left the future in Dolores’s hands. Not a bad place to end things! So of course it’ll probably come back and do its thing all over again.

— I’ve been singing “no stakes, No Stakes, NO STAKES NO STAAAAAKES” to the tune of “Jolene” in my head since last night, and if nothing else — I hope you get it stuck in your head too. You’re welcome!

← Reddit Asks the Question: 'Women of Reddit, What is the Grossest Thing a Man Has Said To You?' | 'Tales of The Walking Dead' Is, Uh, Different →