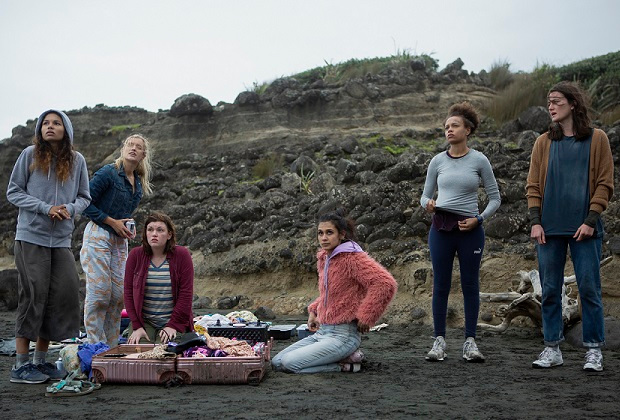 Stream it or Nah: 'The Wilds' Is Poised to Take Over the Online Discourse

I’d never heard of The Wilds three days ago, but it came up as a new series on Prime Video and I figured that, professionally speaking, I should at least give it a look-see to see if it was worth reviewing. I watched an episode, and it was compelling enough to give it a second episode, and by the third episode, I was all in. It takes a minute, but The Wilds is addictive as hell.

It’s also a weird sort of mash-up of Lost, last year’s wildly enjoyable Society on Netflix, as well as one of last year’s worst shows, The I-Land, also on Netflix. It’s about a group of teenage girls who are stranded on a remote island after their plane goes down, except — and I’m not spoiling anything by saying so — it’s apparent very early on that this is a staged social experiment orchestrated by Gretchen Klein, a mysterious woman played by Rachel Griffiths, who is the only cast member with whom I am familiar.

Like Lost, each of the characters have off-island backstories that inform not only who they are, but why they were chosen to be a part of this social experiment. It’s not a spoiler, either, to say that the consistent theme between all of their issues is the patriarchy. Literally. The social experiment is designed to see what might happen if a group of troubled girls is stranded on the island and left to their own devices without the pressures of that patriarchy influencing their decisions.

You’d like to think that it would be all kumbaya and the opposite of Lord of the Flies, but that wouldn’t be a very entertaining series, would it? There is a lot of drama, but what is interesting — and different — is that there isn’t an effort to establish a pecking order. No one’s trying to commandeer a leadership position. Cliques and hierarchies do not form. But there is an enormous amount of baggage the girls have to work through involving sexual abuse in its many forms and intense father issues. A lot of these issues are worked through together, but not by choice, exactly. Whether they like it or not, they are their own support system. Lurking in the background, meanwhile, are Gretchen and her people, who facilitate the onshore arrival of floating suitcases with medicine, when necessary, and otherwise try to remotely put out fires on the island. Gretchen’s motives are well-intentioned, misguided, and megalomaniacal. She plays both the series’ central villain and a victim of the patriarchy herself.

Like The Society, The Wilds is wildly entertaining, although considerably less violent (see, again, the lack of men), but I don’t want to give the impression that the Amazon series is prestige TV. It’s a B-movie series that hugs the line between serious issue-based television and trashy afterschool special. The cast is largely made up of unknowns, but they are all solid in their roles, and unlike on The I-Land or even Lost, the characters also look like they have spent weeks stranded on an island. But unlike I-Land and Lost, there are no supernatural or sci-fi elements. It is a modern, orchestrated Lord of the Flies experiment, but with women only. The characters are deeply drawn and, like anyone, they’re alternatively likable and unlikable. It’s a surprisingly solid show given the rehashed premise, and it’s also one that — like the social experiment at its center — is designed to be discussed and debated. I suspect in the weeks to come (and over the holidays), it will become a major source of online conversation.