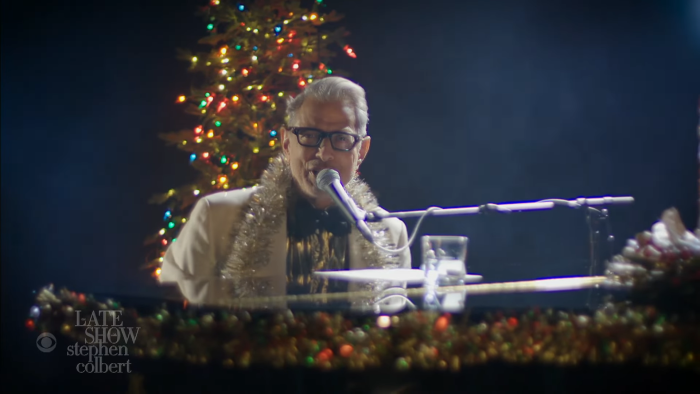 Stephen Colbert Wants You To Have A Very Goldblum Christmas

I’ve found myself enjoying Christmas more and more as I grow older. In my younger days (my 20s) I took a principled stance against the holiday and its capitalistic practices. But, after getting married and wanting (and then having) kids, I now get excited for Christmas earlier and earlier. Michael Buble’s Christmas album finds its way back onto my phone as early as Thanksgiving (this year even earlier). So, I was pretty excited to see that Stephen Colbert had filmed a Christmas song-oriented sketch for his show. I was even more excited when I saw it featured Mr. Jeff Goldblum.

On the most recent The Late Show with Stephen Colbert, the crew introduced a new Christmas album by Jeff Goldblum. The environment is right. He’s dolled up like a Christmas-time lounge singer. There are several glorious Christmas trees. But, in true Goldblum fashion, he’s too busy going on tangents to sing the actual song.

Goldblum is a perfect late-night guest as it is. He’s always interesting, off the cuff, and willing to talk. That may seem like a low bar, but some interviewees could take pointers. Goldblum seems game for just about anything and is not shy about poking fun at himself. He knows his brand and style and leans into it. What could easily be a one-note bit is elevated by Goldblum’s willingness to play. It’s great.

It’s not even the week of Christmas yet, and late-night shows are getting their sketches out there. I guess they’ll have shorter weeks next week (if they have shows at all), so I’ll just soak this in while I can.