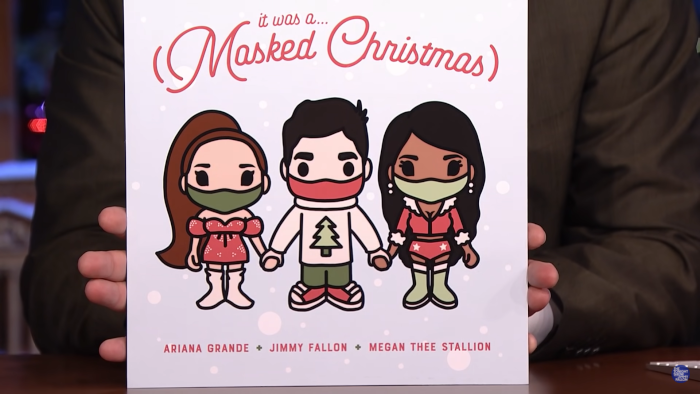 As a young man, I went on Limewire and downloaded a music video called “Idiot Boyfriend.” It was a comedy song written and performed by a young cast member at SNL. His name was Jimmy Fallon. I loved that song, listened to it constantly, and at one point, performed it for one of my seventh-grade classes. Theater kids are gonna be theater kids. I have not listened to or thought about the song in years. Then, Jimmy Fallon debuted a new song on The Tonight Show, and suddenly I was thirteen again.

The new song in question is not about a boyfriend that makes increasingly selfish decisions. This one is about Christmas. It’s about how hard the last year has been and celebrating by getting a booster shot and masking up while being with family. Not only is it a solidly composed track, but the video is also funny. The song isn’t going to blow people’s minds with its arrangements, but it’s fun pop music. Ariana Grande plays an excellent straight-man to Jimmy’s silliness. Megan Thee Stallion is dressed as a nurse. What more could you ask for?

If anything is tough it’s the build-up to the song. Jimmy goes into a long story about how it was developed, which is interrupted by applause at every reveal. It’s being played as sincere and exciting but comes across as kind of boring. It’s just Jimmy texting his famous friends and getting them to agree to do the song, which they do. It’s all well and good, but it’s given the weight of a Christmas miracle, and it just isn’t that.

Either way, the song is a lot of fun and worth a listen. It’s the kind of thing that Jimmy excels at. SIlliness set to a beat.

← When It Comes to Kamala Harris, Politico is Petty AF | FX On Hulu Is No More, but FX Will Continue to Air On Hulu →