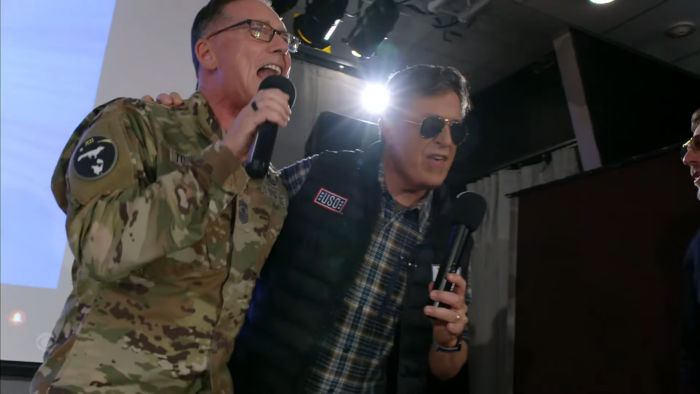 It’s easy to joke about Space Force. The military branch was introduced during the former administration and quickly became the butt of many jokes. Greg Daniels even made a comedy show about it. Well, that show is gone, and Space Force is still around, so who’s laughing now, Mr. Famous Showrunner and Producer?! Probably still Greg Daniels. But some real people serve as members of Space Force, and Stephen Colbert visited them to show his appreciation.

Colbert and Country Music star and Navy vet Sturgill Simpson flew to Greenland to visit members of Space Force. The host and singer performed, drank, and palled around with the grateful members of the military. I don’t say grateful lightly, either. One of my favorite things about USO performances is the genuine delight on soldiers’ faces. The entertainment industry can do great things when its heart is in the right place.

Stephen discussed this trip on a recent live episode of Conan O’Brien Needs A Friend (which I was happy to be in attendance for). One detail, which pertains to this clip specifically, is that the Space Force folks can get their drink on. It makes sense. They have nowhere else to go (which Colbert jokingly points out while talking to them). They’ve got their rooms, a bar, and work. Where do you think you’d be?

Toward the end of the segment, Colbert and Sturgill sing karaoke with a member of the crew, and it’s truly a joy. It may seem like a simple act, but that’s part of the magic. Colbert and Sturgill treat these people like people. They had fun, snapped pics, and sang their butts off. It’s just nice, y’all.

So make your jokes if you want. But when Xenu one day returns from the bowels of deep space to reclaim Earth, I know who I’ll be calling on. And they do a mean rendition of “Radar Love.”


← 'Wonder Woman 3' Is Reportedly Dead at James Gunn's DC Studios | What The Hell Is Going On With DC Studios? →