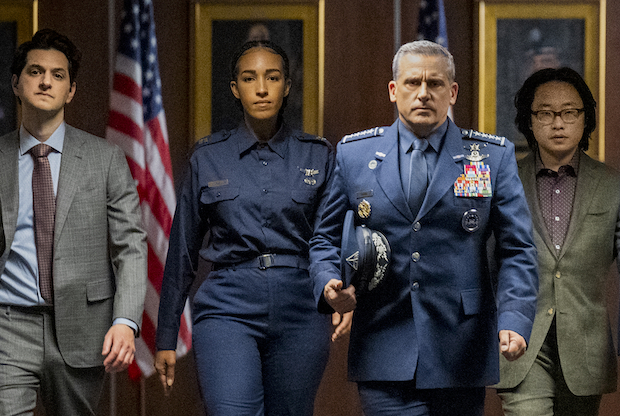 Netflix’s Space Force was created almost certainly on a whim: Steve Carell got together with his The Office showrunner, Greg Daniels, and decided to reunite and make a show based on the comedic potential of an absurd, far-fetched idea that would eventually become a reality during the Trump Administration: A Space Force. The eighth uniformed branch of the U.S. Government still exists, although it’s unclear to me what it does. In either respect, the realization of one of Donald Trump’s brain farts sapped the television show of some of its comedic value, while the pandemic and the election of Joe Biden sapped it of the rest.

The idea seems of a very specific moment that passed even before the first season aired, while Netflix renewed the series for a second season based less on the quality of the show and more on the popularity engendered by any project that might star Steve Carell and come from Greg Daniels. According to Netflix, about 40 million households watched it, and about 8.3 percent of all subscribers viewed it within the first month of its release. I suspect they all watched for the same reason I did: To see if it’s any good. It is not. Those who watched it in its entirety probably also did for the same reason I did, as well: To see if it ever got better. It did not.

Anyone watching the second season, therefore, is likely doing so, again, for the same reason I did: To see if it improved between seasons. It did not. Space Force was bad, and it is still bad. Maybe even worse.

It shouldn’t be, because even a bad idea that’s out of its time can be salvaged by a great cast and a talented set of writers, of which Space Force has no shortage. It was created by Daniels and Carell, and stars Carell, Ben Schwartz, John Malkovich, and Jimmy O. Yang, while Ken Kwapis — who directed the first and last episodes of The Office — directs every episode of the second season. What could go wrong?

Most everything, as it turns out. Space Force is a workplace comedy that, especially in its second season, doesn’t do all that much to take advantage of its specific workplace setting. The second season largely deals with an interoffice romance between Major Angela Ali (Tawny Newsome) and Dr. Chan Kaifang (Jimmy O. Yang); the decision General Mark R. Naird’s (Carell) daughter, Erin (Diana Silvers), has to make about whether to go immediately to college or take a gap year; and the rest of the team’s efforts to prevent their workplace from being shut down by the government, which sees no value in the organization. On the latter front, we learn in the premiere that the team has four months to illustrate their value. The next five episodes largely ignore that, and then in the finale, the four months have expired, and they still need to find a way to illustrate their value, which they do by resolving a problem that miraculously arises only minutes before their deadline.

There’s a smattering of laughs along the way (a prank-war montage being a mid-season highlight), but certainly nothing worth investing one’s time in despite the short run time — there are 7 episodes of about 25-30 minutes each, but it’s also one of those series with 3 minutes of credits at the end of each episode. The cast is likable, but they’re given little to work with, though two of the cast members — Carell and Jimmy O. Yang — serve as writers and provide much of the material. Moreover, Lisa Kudrow only returns for one scene (a Facetime call from prison), while Diedrich Bader, Terry Crews, Jane Lynch, Patton Oswalt, and Patrick Warburton have less than five minutes of screentime, so their talents are largely wasted, too, which is a running theme of the series: So much talent, so little reason to watch.

If you like the feeling of being able to watch an entire season of television in under three hours, Space Force is for you. If you’re watching for any other reason beyond seeing John Malkovich briefly trapped between two vending machines, don’t bother.