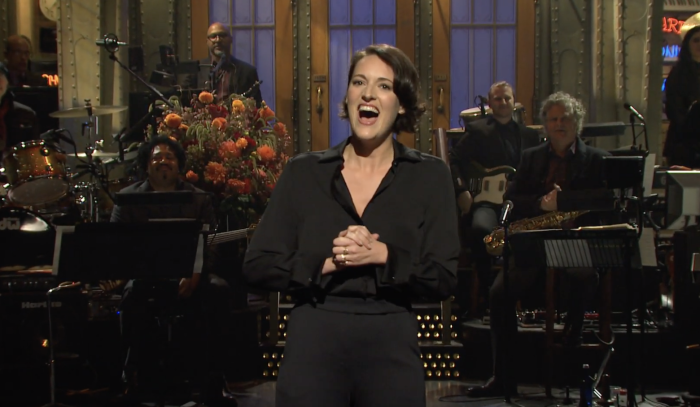 'SNL' Highlights: Phoebe Waller-Bridge Is the Only Highlight You Need

After a fairly mediocre SNL premiere to the 45th season last week, the series returns with an impeccable host in Phoebe Waller-Bridge, making her debut on the series, musical guest Taylor Swift, and a maybe the ripest political environment for comedy in 45 years of SNL.

Cold Open — Speaking of that political environment, the show kicks off with a meeting between Pence, Giuliani, William Barr, Mike Pompeo (played by Matthew Broderick), and “the only original cabinet member left, Ben Carson.” They talk about how to cover their tracks, or alternatively, flee the country in the wake of the impeachment inquiry. It’s a painfully lousy cold open, save for an amusing line from Broderick’s Pompeo, “Impeachment moves fast, if you don’t look around …” Wow. This is the best they could do? Yikes. Trump gives them lemonade, and SNL somehow turns it back into lemons. (Watch Here) (Score: 2 out of 10)

What’s Wrong with this Picture? — Kenan hosts a show with very simple rules: Look at the picture, and tell me what’s wrong with it. The contestants are very, very dumb, and they turn a child’s game into depraved or idiotic scenes. Eh. (Watch Here) (Score: 3.5 out of 10)

Love Island Commercial — I have never seen Love Island, but I don’t think it’s necessary to understand how unfunny this sketch is, although Phoebe Waller-Bridge’s lips are terrifying. (Watch Here) (Score: 3 out of 10)

Mid-Day News Show — Two black anchors and two white anchors cover the news, and the anchors keep score when someone from the opposite race commits a crime. Now this is a good skit. More like this, please. (Score: 8 out of 10)

History’s Channel’s “War in Words” — SNL performed a version of this skit last season (I don’t remember if it was good or not). During WWII, a fighter pilot sends long, heartfelt letters back home to his wife, who sends back short, cryptic responses without proper context, spiraling absurdly until the wife is hanging out with Hitler. It’s better than it has any right to be, largely thanks to Phoebe. (Score: 6 out of 10)

Weekend Update — Che and Jost, to their credit, once again do strong work with the Trump news, not that the degree of difficulty is high when Trump basically writes the jokes for them (sorry, even when they’re good, I’m critical). The weird news is pretty good, too, and I’ll even forgive the R. Kelly groaner. (There’s also a joke about the absence of Pete Davidson, who is currently filming Suicide Squad, if you are wondering why he is not around).

Bowen Yang makes his debut on “Update” as a Chinese trade representative, and he’s great (the segment is “OK”). However, I could’ve done without the Mort Fellner supercentenarian news segment, which is basically the same joke told 7 times. (Score: 7 out of 10)

Royal Romance — Phoebe plays a Royal family member who nearly destroyed the monarchy when she fell in love with a cocaine-addicted, sexually promiscuous Blaxploitation actor nicknamed Thunderstick in the 1970s. I really wanted to like this, but I didn’t. (Maybe you’ll appreciate it more, Mat). (Watch Here) (Score: 4 out of 10)

Buddy’s State Line Bar — Four angry white trash women argue over a guy who works at the Guitar Center that they all hate-love. There’s a couple of moments here where the cast cracks a little, but it’s not a particularly good sketch, overall. (Watch Here) (Score: 3.5 out of 10)

← Fact Checking Richard Ramirez and 'American Horror Story: 1984' | A Brief Overview of the Impeachment Inquiry As It Stands →