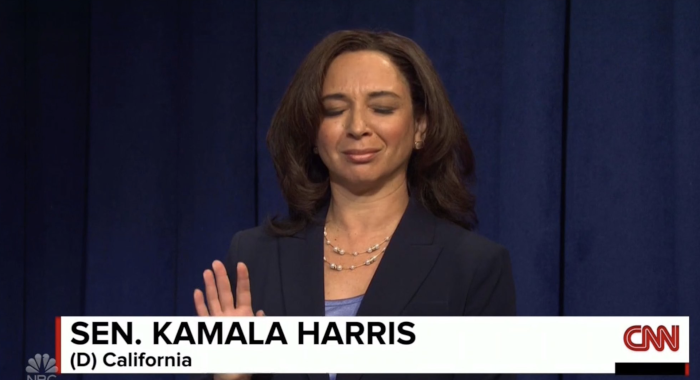 Here were are, kicking off the 45th season of Saturday Night Live under a cloud of controversy, after Shane Gillis was hired to appeal to conservative viewers and then fired because he appealed a little too much to conservative viewers. The Gillis controversy notwithstanding, it should actually be a big year on SNL, as it enters the season during the midst of an impeachment inquiry and will end the season during a big election year.

A couple of housekeeping notes. There are two new featured players, Chloe Fineman and Bowen Yang. Leslie Jones has left the series, while Heidi Gardner and Chris Redd have been elevated from featured players to regular cast members. Your host tonight is Woody Harrelson, with musical guest Billie Eilish.

Welcome back to another season of highlights. If you’re new here, I grade each skit, embed the best ones, and provide links to YouTube for the rest.

Cold Open — The season premiere begins in the worst way imaginable: Despite his many threats to quit, Alec Baldwin is back as Donald Trump (and Kate McKinnon as Rudy, and Aidy Bryant as William Gates). Bowen Yang makes his first appearance as a cast member, playing Kim Jong-un, although he played that role last season. As for the substance of the Cold Open? It’s bad. It’s Trump calling around to his friends in an attempt to fix this whistleblower situation, culminating in a call to Liev Schreiber, who Trump believes is actually Ray Donovan, who can “fix” his whistleblower problem. An inauspicious beginning to the season. (Watch Here) (Score: 3 out of 10)

Monologue — Woody Harrelson comes out wearing a tuxedo, and talks about how he’s become a “fashionista,” before stripping the tux off and revealing that he’s wearing pajamas underneath. Most of the rest of the monologue consists of Harrelson sticking his foot in his mouth by saying something “insensitive,” and then apologizing and then sticking his foot in his mouth while apologizing, which I suppose is meant to be a joke about “cancel culture,” which would be fine if it were at all funny. It’s not. The monologue has Colin Jost written all over it. Oof. Welcome to Season 45! (Watch Here) (Score: 2 out of 10)

Impeachment Town Hall — Well, it’s time to bring the Democrats in. Having missed the summer debates, SNL decides to have the Dem candidates in a town hall debate about impeachment. Bowen Yang plays … Andrew Yang, and Chloe Fineman — in her first appearance — plays Marianne Williamson. Colin Jost, making a rare appearance in a skit, plays Mayor Pete, Larry David is back as Bernie, Kate McKinnon is Warren, and Woody Harrelson does a great Joe Biden. Maya Rudolph shows up to play Kamala, and she and McKinnon’s Warren are terrific. It’s not a great political skit, but Maya, Woody, and Larry David are very good in it. If you didn’t see the first two skits, you probably won’t think much of this one. If you did, you’ll think it’s funny only by comparison. It’s definitely worth watching for Maya. (Score: 6 out of 10)

Billie Eilish Musical Performance — I don’t usually cover musical performances, but I like Billie Eilish a lot, and this performance is, uh, gravity-defying. I’m sure it involves a lot of weird camera tricks, but to pull this off live is really cool.

Weekend Update — The political jokes write themselves these days, and credit to Jost and Che for not completely f**king them up anyway. I can’t say the same for the non-political jokes. Keenan returns as Big Papi, which is super dumb but dumb funny, and that’s it for an unusually short “Update” with only one desk guest. (Score: 5.5 out of 10)

Halftime Speech — Harrelson plays a coach delivering a halftime speech to a team down 48-3, but he’s interrupted by his wife (Heidi Gardner), who asks him if his penis is broken, which becomes the only topic of conversation during the rest of the skit. It’s so bad, but bizarrely hilarious. His penis makes Donald Duck sounds. I’m sorry. That’s funny! This one is the Mat special of the night (great party last weekend! Say hi to Haz!) (Score: 6 out of 10)

Inside the Beltway — Another political skit! Three in one show! Three pundits discuss the seriousness of the allegations against Trump, while Keenan plays another, whose contribution is probably the most insightful and accurate: “Ain’t nothing gonna happen.” It’s funny, but it’s also the most depressing skit of the night. (Bonus hilarity: When wardrobe comes out too soon for a costume change, and Aidy Bryant can’t stop laughing). (Score: 8 out of 10)

Dad — It’s ten to 1:00, so it must be time for the Kyle Mooney skit. Set in the 1980s, it’s a song about a Dad’s obsession with his phone, only it’s one of those big mobile phones with antennas, which doesn’t make this skit any funnier. (Watch Here) (Score: 2 out of 10)

Apple Picking Commercial — I went apple picking today, and everything about this skit is 100 percent accurate (particularly the part about how apple-picking places are always in the part of the state with all the Confederate flags). “You can pay $45 and take home $10 worth of apples!” Bad start to the show, but a strong finish here. (Score: 9 out of 10)

The sign-off isn’t embeddable, but if you watch it on DVR, stick around, if only to see Woody give a shout out to Greta Thunberg, and to see just how incredibly excited Chloe Fineman and Bowen Yang are after their first show.

← The Latest on the Impeachment of President Donald Trump: September 27th, 2019 | Ivanka Trump Has Never Seen a 'Star Wars' →