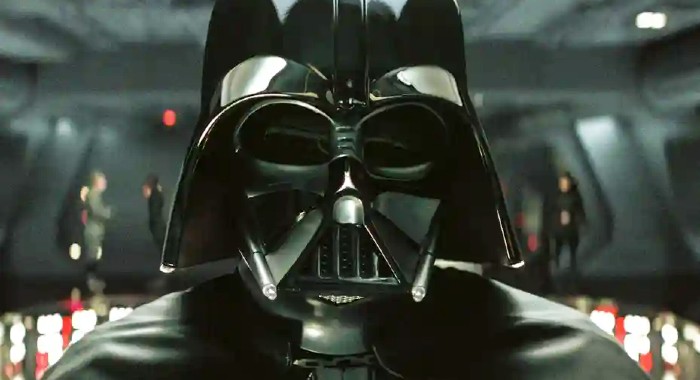 Previously on Obi-Wan Kenobi: After getting easily wrecked by his old pupil turned Dark Lord of the Sith, Obi-Wan gets his mojo back thanks to spending exactly 30 seconds in a Bacta tank. Without even wearing the canonically-correct diaper, I might add! After learning that Leia is being held captive in the, sonofa-, Fortress Inquisitorius, he mounts a successful rescue mission with Tala. However, Reva the Third Sister discreetly placed a tracker/restraining bolt on Leia’s beloved droid, Lola. Reva’s cunning move earns her the favor of Lord Vader who was on the verge of murdering her on the spot. Together, they pursue Obi-Wan and Tala to the Path outpost on Jabiim.

Hi, hello. I’m sure a lot of you have some questions about the headline, so let’s get right to it. For the record, the whole Vader/school shooter thing isn’t some wild-ass premise that I pulled out of my butt. When the makers of Obi-Wan Kenobi sat down to watch Part 5, clearly, they realized in horror that they had directly mirrored details of the shooting in Uvalde, Texas. How do I know this? Because they slapped a content warning at the beginning of the episode.

“There are certain scenes in this fictional series that some viewers may find upsetting.”

In the creative team’s defense, the show was obviously written months, if not a year or more before Uvalde, which occurred less than 48 hours ahead of the season premiere. Granted, the writers should have anticipated a school shooting happening at any given moment because this is America, but we’re also talking about a massive Sandy Hook-level event. My point is any similarities in Obi-Wan are a terrifying coincidence but make no mistake, there is a jarring parallel to Uvalde that I honestly can’t believe Disney and Lucasfilm didn’t edit it out. They knew it was there because, again, that content warning didn’t happen just for kicks.

But let’s back things up for a bit. When the first episode of Obi-Wan premiered, I honestly didn’t clock the opening scene as a “school shooting” moment. As a nerd, I’m fully aware that Order 66 is a crucial part of the lore that’s played out across The Clone Wars, The Bad Batch, Jedi: Fallen Order, and various other Star Wars tales. Granted, the scene involves a Jedi teacher protecting her students, it’s also occurring amidst a general siege of the Jedi Temple. On top of the whole fantastical sci-setting, there’s not a lot of specificity that the clone troopers are shooting up a school. They’re basically laying waste to everything.

That said, after the episode started streaming, I did see people expressing shock that Star Wars basically opened its new series with a school shooting scene literally two days after an actual school shooting. On reflection, I definitely could see it, but then the show went on. Like a lot of people, I just assumed the Order 66 moment was simply to set up Reva’s backstory, and that was the end of it. Of course, now we know that Reva was one of the Younglings in the scene, but that’s where things went completely off the rails. 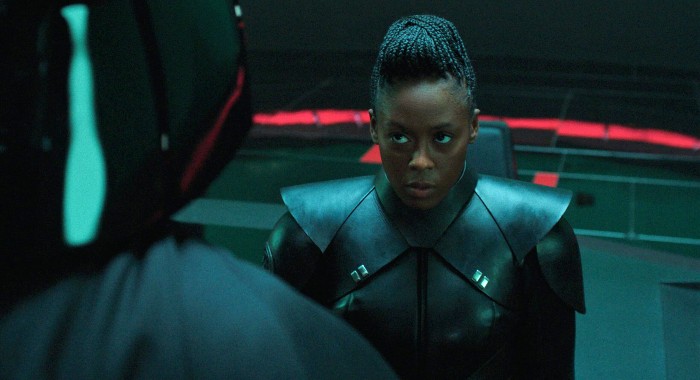 After tracking Obi-Wan to Jabiim and assembling a battalion of troopers outside of the Path outpost, Reva agrees to talk to the Jedi master through a blast door. During this pivotal exchange, we learn that Reva witnessed Anakin Skywalker murder her class of Younglings as infamously seen doing in Revenge of the Sith. That creative decision has always been an awkward and unnecessarily brutal part of Vader’s origin that George Lucas added in the prequels. It makes Luke “sensing the good” in his father in Return of the Jedi janky as all hell. Your pops started his Dark Side career slaughtering schoolchildren in cold blood, but hey, we all make mistakes!

Amazingly, Obi-Wan somehow makes murdering the Younglings even darker. While describing what it was like to see Anakin enter the room, foolishly thinking the Jedi hero was there to save them, Reva tells Obi-Wan that she played dead next to her murdered friends until he moved on to the next class. And that right there is the Uvalde connection. (If you’re not familiar with the details, the similarities are staggering. We’ll just leave it at that.)

As I’ve said probably a hundred times by now, I cannot believe this scene was left in the show. We’re talking about a franchise that spent a bajillion dollars to make Mark Hamill look and sound like he’s 22 again, and yet they couldn’t be f*cked to take out a line of dialog that directly mirrors the highly publicized details of a recent school shooting. Goddamn.

What’s even more mind-boggling is why even lean into a clunky, ill-advised moment in Vader’s origin that, at this stage in the cultural zeitgeist, should be ignored at the very least if not retconned by now. Instead, Andrew Stanton, who assisted Joby Harold for the final two episodes, resurrected Anakin’s child-murdering ways and made him act exactly like a school shooter. There’s no way around it anymore. Anakin forced Reva to hide in the same manner as a Uvalde victim, and after that revelation, we’re supposed to spend the rest of the episode marveling at how badass Vader is? F*ck all that.

Admittedly, my opinion isn’t a popular one because this episode is being hailed as the best of the series. I thought the whole Uvalde connection would be a much bigger thing, but nope, Part 5 is locking down rave reviews. And, honestly, I truly hate to harsh anyone’s buzz. Despite the whole school shooter of it all, this episode was a notable improvement even if its color palette looked like bland puke, The Volume continued to suck the life out of the cinematography, and the writers literally crammed Leia in a vent so they wouldn’t break continuity by having her near Vader. (Which still could happen.)

That said, how in the holy hell did The Rise of Skywalker have a much better Force-pulling a ship out of the sky scene than Obi-Wan? That should be impossible, and the fact that it happened is almost as bad as Star Wars actively reinforcing that its most iconic villain is a school shooter, but with sick space sword moves. Just incredible stuff all around. Great job, everybody.