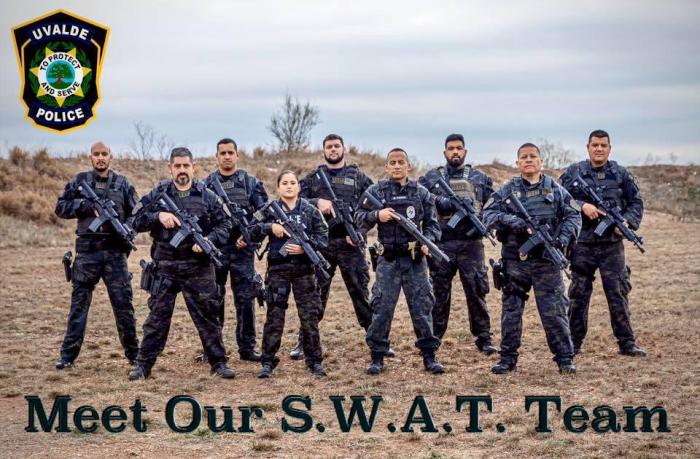 Take a good look at the group in the header pic. Those are some brave officers, right? Ready to put their lives on the line to defend their town of 13,000 people with a $4,000,000 budget and all the surplus military equipment the federal government provides. Their training and equipment consume 40% of the town’s budget. They even train on the Robb Elementary School grounds. This is a group cocked, locked, and ready to rock.

Despite their training, body armor, and heavy weaponry, the Uvalde police waited a full hour for a tactical unit from the Border Patrol to arrive and deal with the shooter, whose name I will not use. Eyewitness testimony and video evidence show armed and armored cops standing at the perimeter and refusing parents’ calls to have someone, anyone, engage the man killing their children. They pinned at least one man to the ground, tazed another, and U.S. Marshals handcuffed a desperate mother who pled with them to rescue their children. When local cops convinced the marshals to free the mother, she leaped the fence, ran inside the school, and pulled her own children from the building.

They waited. For an hour they waited while gunfire rang out from the school. Their stories about why they waited and the timeline leading to the shooter’s eventual death change more than the weather. Initial statements from Dept. of Public Safety State Director Steven McGraw indicated local police chased the shooter until he crashed, and a school officer confronted the shooter and exchanged fire but failed to take him down due to his body armor. Then the next story claimed he confronted the shooter and followed him into the building without opening fire. The current story from DPS Regional Director Victor Escalon says no officers were present or engaged the shooter — who was not armored — in the 12 minutes he wandered outside the school shooting at random witnesses. He then entered the school through an unlocked door. Early police reports stated that officers “contained” the shooter to a single room; current reports say he locked himself in there, with his victims, and not only did they not attempt to get him out but the Border Patrol was unable to breach and required a school employee unlock the door for them. Escalon further stated police arrived on the scene 4 minutes after the shooter entered the school, a full 16 minutes after he crashed his truck. They took fire and retreated, Escalon said, though so far reports of shot officers lack any details about their alleged injuries. Once the shooter was finally dead, local police continued to harass and delay parents from reaching their children, including pepper-spraying a father who attempted to reach his child while he was being put on a bus.

When asked by Wolf Blitzer why officers didn’t follow current training and best practices for dealing with active shooters, namely attacking the shooter as soon as possible to draw his focus away from the children under threat, Lieutenant Chris Olivarez did not improve impressions of officer bravery.

“What the American people need to understand is that officers are making entry into this building. They do not know where this gunman is. They are hearing gunshots, they are receiving gunshots. At that point, if they proceeded further without knowing where this suspect was at, they could have been shot, they could have been killed. “At that point, that gunman would have had an opportunity to kill other people inside that school.

Once again; officers did not barricade the shooter in an empty classroom. He walked in, shot students and staff, and then locked himself in a room with victims while they dithered. They apparently did so out of concern for their own skins. Their claim that officers moving forward and taking fire would have given the shooter an opportunity to kill more, when he was already doing so. When asked about their response, one Lieutenant talked about officer bravery before admitting in his next breath that some officers apparently pulled their own children from the school while leaving others behind.

Here’s a Texas DPS Lieutenant telling a local station that some officers breached the school to get their own children BEFORE the shooter was taken down. pic.twitter.com/BrvS4sCqp6

I genuinely hope that isn’t true, because it makes their cowardly response even worse. When asked why officers waited, and what occurred during the hour-long wait, officers abruptly ended the news conference and fled to what I assume was a safe distance.

"You should be able to answer that question now" - CNN's Shimon Prokupecz pressed Victor Escalon, a Texas Department of Public Safety official, about the amount of time the Robb Elementary School shooting suspect was barricaded in a classroom https://t.co/3dHvWjOO1b pic.twitter.com/0JLc2eO1EM

Before their retreat, Escalon told reporters that the initial officers retreated when they took fire and waited for reinforcements and body armor. Once they arrived, however, officers continued to wait for Border Patrol. One officer, when asked why police aren’t saving their children, told parents, “Because I’m having to deal with you!”

While many questions remain about police incompetence and cowardice, one thing that’s clear is the bravery of unarmed teachers like Eva Mireles and Irma Garcia, who died protecting their students, and that of unarmed parents ready to charge a school to rescue their children outweighs that of armed and armored officers, as you can see in the videos taken by outraged parents.

At 1:20 we see 3 cops holding down a single father desperate to save his children while 2 more shove away a mother, and another dozen loiter at the perimeter, dressed like deployed soldiers about to conduct a night raid on a terrorist cell. It is, of course, roleplay. Despite their years of training, their multimillion-dollar budget, and army surplus gear, when faced with an actual emergency local PD froze, costing 19 children their lives and leaving 17 more grievously injured, while every other child in the school, their families, and indeed the nation are left with varying levels of emotional trauma.

By now you’ve no doubt been reminded how the United States Supreme Court confirmed cops have no obligation to protect the public, despite their positions, firepower, and ludicrous taxpayer-funded budgets. After 21 years of unearned national hero worship in the wake of 9/11, police departments remain dedicated to serving and protecting themselves before the public, including children. A few fools have argued that the progressive push to hold cops accountable for their misdeeds has made them less likely to do their duty.

I'm not defending the actions of the officers. But we've demonized law enforcement to the point that there are far fewer rewards for being a hero, for taking risks. When your culture makes George Floyd the hero, real heroes stand down. Cultural rot has consequences. https://t.co/1YvYt121qt

Cops should not need rewards to do their job. The rest of us don’t. They already have access to weaponry and body armor that civilians protecting their homes in Ukraine would kill for — that they have killed Russian soldiers for. Meanwhile, our “peace officers” fulfill their primary duty of harassing the public while children are murdered behind them. As a human, I am horrified. As a parent, I am infuriated. As an American, I am tired of having my worst suspicions about law enforcement confirmed. Long gone are the days — if indeed they ever existed — that we should give cops the benefit of the doubt when it comes to their personal bravery and basic competence. What happened in Uvalde has, can, and will continue to happen elsewhere. The cowardice of our legislators in the face of the gun lobby and every frothing, slavering gun nut out there is one thing. Their callous acceptance of children’s deaths is well-established, and originates in the money they make every time there’s another mass shooting. It’s greed. The officers on the scene, however, lack that excuse. Armed to the teeth with enough firepower to invade Quebec, they waited for the Border Patrol to do their jobs while shots rang out and children died, either immediately or of their wounds. There is absolutely no doubt that the Uvalde police department’s failures cost children and teachers their lives. When politicians like Amy Klobuchar tout “National Police Week” in honor of dead cops the same week as we remember George Floyd’s murder, when 77% of them died of Covid because they refused to vaccinate and/or mask up, they give a hint about where their priorities lie. They have nothing to do with public safety, merely earning votes. Uvalde is a tragic reminder that despite our blind devotion to the cops in our society, they were never really there for our protection. They’re around to pick up the pieces.

DEVELOPING: The tactical team that eventually killed the Uvalde gunman arrived at the school far earlier than previously known, but was told to hold back and not go in by local police, according to two officials familiar with the response

The Uvalde police have blood on their hands.