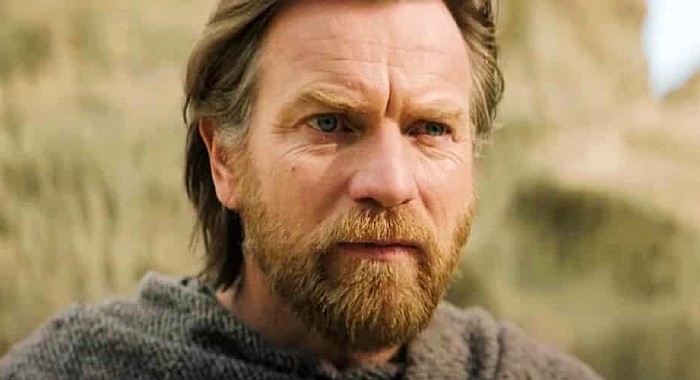 Obi-Wan, You Were the Chosen One!

Hello there. Welcome to another exciting installment of “Mike Gets Stupidly Hyped for a Star Wars Show, Only To Be Completely Disillusioned by the Entire Franchise Before Doing It All Over Again.” (That Andor teaser looks surprisingly dope, right?!) Before we start our journey, I want to address the number one response I know I’m going to get: “It’s a TV show. It’s not supposed to be as good as the movies.”
Wrong.
Let’s travel back to a little Disney+ series called The Falcon and the Winter Soldier. In the lead-up to that show, the creative team boasted that it would be on par with Captain America: The Winter Soldier. Arguably, one of, if not the best Marvel movie. Falcon/Winter Soldier was writing some significant checks, and it disappointingly did not cash them. You cannot hype up a streaming series by promising it will match the tightest action choreography in the MCU unless you know for positively damn sure you’ve got the goods.

What does any of that have to do with Obi-Wan Kenobi? Look, I’m both a huge Star Wars fan and an entertainment writer, so my expectations are set by what the primaries for the series have been putting out there for the better part of a month now. Director Deborah Chow compared the character study happening in Obi-Wan to, I shit you not, Logan and Joker. After watching the first two episodes, I get the former. The latter… what? Chow also promised an “epic rematch” between Obi-Wan and Darth Vader that will go toe-to-toe with their massive, fiery showdown in Revenge of the Sith that capped off the Prequel Trilogy. I mean, Christ, I was told to have my nostalgia boner rocked by a score from John Williams himself, and I can’t tell you how hard I’m missing Ludwig Göransson and his room full of recorders right now.

Like Falcon/Winter Soldier, these were some huge checks, and so far, Obi-Wan is not giving me hope that it can cash them. That’s not on me for wanting too much from a TV show. The Star Wars hype machine created these expectations and, combined with its success with The Mandalorian, it seemed reasonable that those expectations would be met. Sadly, that ain’t happening, and it is truly, deeply unfortunate to behold.

On paper, Obi-Wan Kenobi has everything going for it. Namely, Ewan f*cking McGregor is back, baby. Regardless of whether you still hate the prequels or are onboard with the maybe justified (maybe not) more rosy opinion of them, McGregor’s Obi-Wan was the highlight of those films. Even as George Lucas’ CGI fetish reached its nadir with Attack of the Clones, McGregor was pure sex. If I stare at this photo for more than a minute, technically, the state of Florida can shoot me. 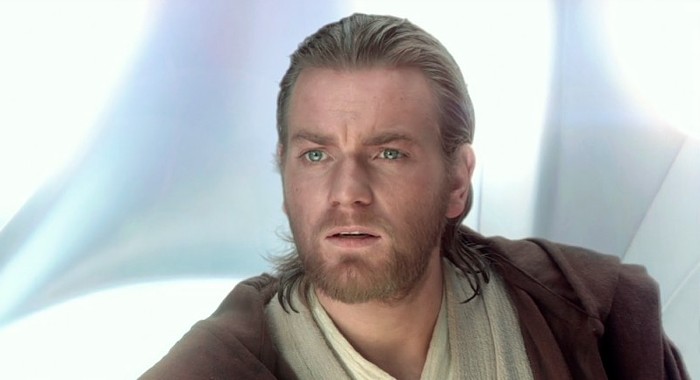 As for the story … it’s fine. And because this is a recap, I’ll summarize the first two episodes, which were dropped at the same time as a treat, I guess.

After opening with brief flashback to a Jedi teacher giving her life to help a class of Younglings escape Order 66 — I’m assuming this will not be a random scene — sh*t gets real right out of the gate as the Grand Inquisitor (Rupert Friend) flanked by the Fifth Brother (Sung Kang) and Reva tha Third Sister (Moses Ingram) arrive on Tattoine where Obi-Wan is hiding and keeping a watchful eye on 10-year-old Luke Skywalker. However, the Inquisitors are unaware that Kenobi is on-planet and are chasing a different prey: Nari (Bennie Safdie), a Jedi who’s made his presence known by not being able to ignore his compulsion to do good. After forcing Nari to reveal himself, he escapes thanks to the commotion caused by the Grand Inquisitor stopping Reva from murdering the Jedi on the spot. Turns out, she has a reckless streak that’s fueled by her impatience with hunting down “scraps” when she knows a much larger prize is out there: Kenobi. Reva is also the most compelling part of the show, which is impressive considering all of the Ewan hype going into series. From the minute Moses Ingram is on screen, Obi-Wan Kenobi belongs to her.

Unlike Nari, Obi-Wan keeps his sh*t together. He quietly works a job harvesting meat from Krayt dragons (or some sand beast thing) and does nothing when tempted with opportunities to get his Jedi on. However, he does try to stay connected to Luke, but his Uncle Owen (Joel Edgerton) isn’t having any of that. After attempting to leave a toy T-16 for Luke at the Lars’ family moisture farm, Owen confronts Obi-Wan in town and makes it very clear that Luke’s not going to be trained by the guy who seriously beefed it with his dad. However, that convo is cut short when Reva and the Fifth Brother start demanding information on Nari. This leads to a tense stand-off between Owen and Reva where Owen says that he’d never protect a Jedi because Jedi are “vermin.” Reva buys it, but she’s still about to murder him anyway until the Fifth Brother shuts her down. Turns out, he’s sick of her making their jobs harder by going straight to stabbing.

Understandably, Obi-Wan is not loving that the Inquisitors are almost up his butt especially after dumbass Nari was able to find him earlier. Despite warning Nari to bury his lightsaber in the desert and stay hidden, the reckless idiot is eventually caught and hung for dead in the middle of town. If Obi-Wan wasn’t already keeping a low enough profile, he sure as sh*t is now. But it wouldn’t be much of a show if he never left his cave, would it? 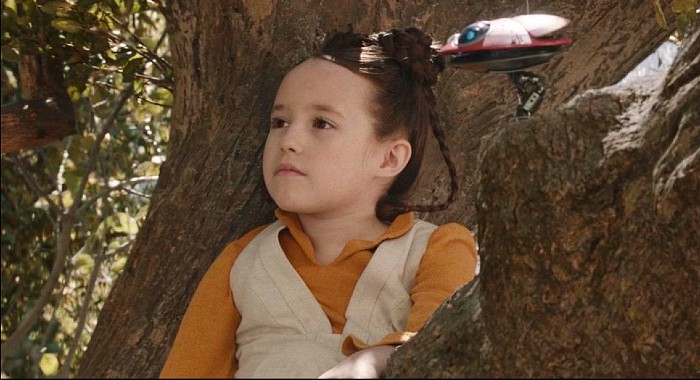 If there’s one thing I have to give Obi-Wan props for, it’s keeping little Leia Organa (Vivien Lyra Blair) here a secret. I was genuinely surprised when I realized what was happening. That said, a while back, there was a whole thing about how writer Hossein Amini was fired after his original scripts were too similar to The Mandalorian thanks to essentially using a young Luke as the series’ Grogu. Jon Favreau and Dave Filoni were reportedly not thrilled, which, OK, makes sense.

So, what the f*ck happened? Because Obi-Wan absolutely has a Grogu, only now it’s Leia. Granted, she can’t hold a candle to everyone’s favorite little green son/merchandising golden goose, but her outfit homages are adorably on point.

Anyway, we meet young Leia on Alderaan where she’s every bit Padme and Anakin’s child, and full of Carrie Fisher’s spunk. Unfortunately, she’s kidnapped by — I swear I’m not making this up — Flea from the Red Hot Chili Pepper’s, which prompts her father Bail Organa (Jimmy Smits) to frantically seek out Obi-Wan for help. You see, apparently, it’s stupid easy to find a guy who’s supposed to be hidden in exile keeping Darth Vader’s son a secret. Bail literally just shows up in Obi-Wan’s cave as easily as I saunter into a Chipotle. At first, the old Jedi doesn’t think he still has the goods, but Bail gives him some world-class guilt about how he couldn’t save Anakin, but he can still save Leia. That gets Obi-Wan to go out in the desert, unbury his lightsaber, and leave Luke unguarded while he tracks down his sister that he’ll later make out with. Remember that? Haha, incest.

After Obi-Wan arrives on Daiyu, which is supposed to be this new awesome planet, but it looks like a dark shoebox with bad set design and some of the worst Star Wars costumes you’ll ever see in your life, he learns of a “Jedi” named Haja Estree (Kumail Nanjiani). Only Haja isn’t really a Jedi, he’s just a con-man pretending to be one. Cool? Anyway, in a display of some truly top-notch writing, Haja sends Obi-Wan to exactly where Leia is being held hostage, and the old Jedi reminds everyone he’s still a sick-ass brawler. 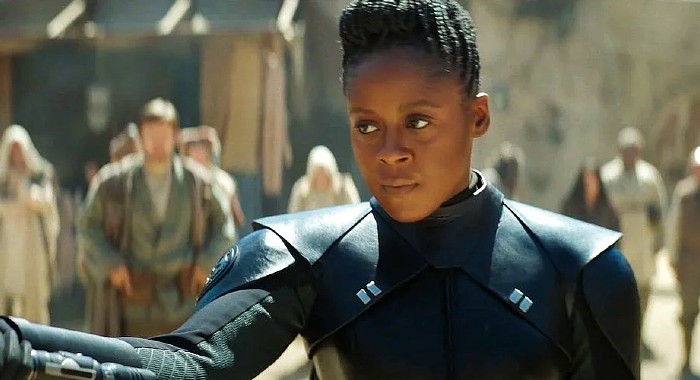 While Obi-Wan embarks on a banter-filled escape with Leia, creating a dynamic that the jury is still out on — Please do not Jake Lloyd this little girl. I repeat do not Jake Lloyd this little girl. — Reva is already on planet. Turns out, she hired Flea to kidnap Leia under the assumption that Bail would ask Obi-Wan for help. However, she didn’t run this past the Grand Inquisitor who is pretty pissed that Reva kidnapped the daughter of an Imperial senator. After once again being told to calm her ass, Reva does the exact opposite and puts a bounty on Obi-Wan’s head then waits for the blaster fire. Eventually, the two are close to confronting each other, and it seems like a lightsaber fight is imminent as Reva has Obi-Wan cornered in a warehouse. Except the Grand Inquisitor arrives and he is freaking done with Reva after her bounty hunter stunt, which prompts her to entirely break Star Wars continuity by seemingly killing him right there on the spot. There were reports that the scripts for this show were ignorant of anything that happened in Rebels, and well…

After (maybe) murdering the Grand Inquisitor, Reva tells Obi-Wan that Anakin is still alive, and cut to our bad boy chilling in a Bacta tank as the credits roll on the second episode. Sounds like a cool story, no? Well, guess what.

I can’t believe I’m saying this, but from a purely technical, cinematic standpoint, The Book of Boba Fett looks like a goddamn masterpiece compared to Obi-Wan. After The Mandalorian Season 2, there were concerns that the Star Wars shows would lean too heavily into The Volume/StageCraft technology. While Boba Fett did have some less than elegant uses of the LED soundstage, it was pretty much on par on with the expertise on display in The Mandalorian. In fact, Episode 5 was probably the best looking piece of Star Wars to hit Disney+. The Mandalorian team is truly pushing the limits of the medium.

So with that in mind, you’d just assume that Obi-Wan would take things to a whole other level as the show promised an “epic” experience on par with Revenge of the Sith. Lucasfilm wouldn’t bring Ewan McGregor back for a show that looked like garbage, right? Welp, they did. If you thought the Egyptian afterlife episode of Moon Knight did Oscar Isaac dirty, just wait until you feast your eyes on this garbage. There are scenes that look straight out of The Next Generation and others that betray a franchise that used to be hailed for its cinematography. Christ, Obi-Wan makes the prequels look like Avatar, and George Lucas literally directed them from a couch inside a giant green box. That’s how budget this show looks.

You can’t promise fans an epic addition to the Skywalker Saga then turn around and piss middle-of-the-road streaming content in their eyes. Eventually, people will get tired of it. Maybe.