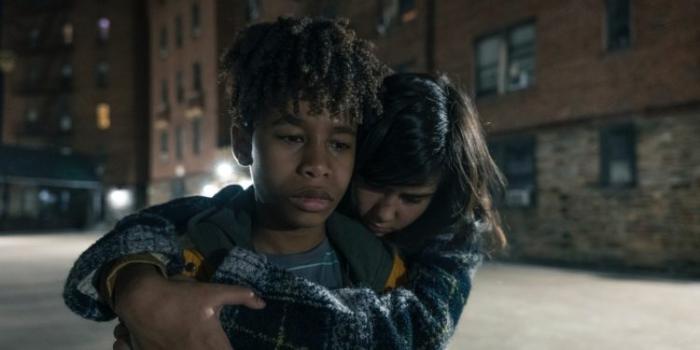 Interestingly, Showtime’s Let the Right One In doesn’t bear an especially strong resemblance to either of the two film adaptations (the Swedish or the American), or even the novel upon which the movies were based, although it is more similar to the novel. The films centered largely on the budding romance between a bullied 12-year-old boy and a vampire girl who appears to be the same age. That element still very much exist in the Showtime series, but the relationship presents more as friendship than romance, and the series centers more on the relationship between the vampire daughter and her father, played by Demián Bichir. If you can get Bichir to be in your series, that’s probably the way to go.

In the Showtime series, Mark (Bichir) and his vampire daughter, Eleanor (Madison Taylor Baez) move into a New York apartment building, where Eleanor meets and befriends Isaiah (Ian Foreman), a meek and bullied 12-year-old who lives with his single mom, Naomi (Anika Noni Rose), a police detective. Naomi’s profession proves to be important because she’s investigating a series of mysterious murders around the city connected with a certain drug. The murders are also connected to Mark, who is killing people to feed his daughter.

Mark is a good father who cares for his daughter and has been put in a bad situation. He loves his daughter enough to kill for her, and he also feels further obligated to do so because Eleanor’s mom sacrificed herself for Eleanor. Mark, however, tries to stick with drug addicts, and Isaiah’s estranged father happens to be one. In the first episode alone, Isaiah and Eleanor meet; Eleanor’s Dad kills Isaiah’s Dad; and Isaiah’s mom, Naomi, starts an investigation that will pull all of these characters together through Mark’s murder of her ex husband. Naomi also has a possible romantic interest in Mark.

The real departure in the series, however, is the search for a cure. Mark believes that if he can find the vampire who originally infected Eleanor ten years prior, he can find a cure. The trail to the original vampire leads Mark to a particular hardcore drug developed by Arthur Logan (Željko Ivanek) to essentially bankroll his secret research into finding a cure for the vampirism of his son, Peter (Jacob Buster). Arthur dies early on, however, and his research into a cure passes to his estranged daughter, Claire (Grace Gummer), with the aid of the Logan family henchman, Matthew (Nick Stahl), who keeps Peter fed.

It’s a stacked cast and the writing is solid, even if the central element of the two movies is muted in the series — a romance between the two probably couldn’t sustain multiple seasons and, in this environment, I’m sure Showtime would be accused of something nefarious if a 21-year-old and a 12-year-old were hooking up, even if the 21-year-old stopped aging at the age of 12. The way the series is set up also leaves it with nowhere else to go except the predictable route: Eleanor’s Dad and Isaiah’s Mom are going to bond as parents and ultimately intersect as detective and suspect, and that is precisely what happens in the first season finale.

Mark’s investigation brings him closer to Claire until a suspicious Peter abducts Eleanor to figure out why Mark is snooping. Eleanor, what with being a vampire, manages to easily kill Jacob, which alerts Claire to exactly what Eleanor is. Claire, still in search of a cure for her brother, wants to meet Eleanor as much as Eleanor wants to meet Claire: The two can work together to develop a cure. However, Claire’s allegiances are to her brother, so obviously Eleanor is going to be the guinea pig for Claire’s research.

Meanwhile, because Naomi is clearly closing in on both Claire and Mark, Claire insists that Mark kill Naomi. Mark, however, cannot bring himself to kill the mother of his daughter’s best friend. Mark has developed a closeness to both Naomi and Isiah and feels awful enough about killing Isaiah’s father. He balks. Naomi follows Mark back to Claire’s lab, where he discovers that Claire has already injected Eleanor with an experimental serum. He’s not allowed time to process it, however, before Naomi barges in looking to make arrests. Chaos ensues, Eleanor reveals herself to be a vampire to Naomi, and Naomi is fatally wounded in the melee.

Eleanor, however, refuses to let her best friend lose his mother. Against the wishes of Mark (and probably Naomi), Eleanor turns Naomi into a vampire to save her life. That’s the cliffhanger that ends the first season. Will Naomi — a homicide detective — kill to satisfy her hunger? Will Mark continue to procure bodies for Eleanor? Peter? Naomi? Will Claire find a cure, and what damage — if any — has the serum she injected into Eleanor done?\

These questions may or may not be answered, depending on whether Showtime renews the series for another season. Paramount+ looks as though it is planning to absorb Showtime, the ratings I’ve seen for Let the Right One In have been anemic, and critics have been mixed, at best on the series, which hasn’t exactly caught fire on social media, either. It’s a fine show with a terrific cast, but I wouldn’t bet on a second season.


← Why Hollywood Loves Fat Suits and Why They Suck | 'Westworld' Isn't Just Canceled, It's Being Wiped From HBO Max →