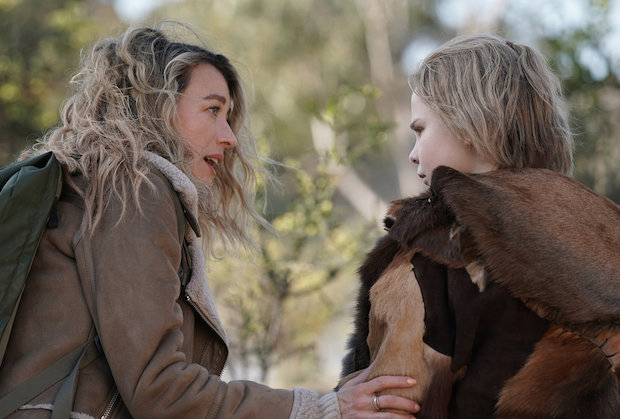 This week’s La Brea is the penultimate episode of the first season and feels more like part one of a two-part finale. The La Brea Sky People are not going to be rescued this season, although two people (and potentially more) may find their way through a time portal that brings them to 1988.

In fact, there’s something of a time conundrum going on now. Gavin is both in the present and a 12-year-old by the name of Isaiah in 10,000 B.C., while Lily also exists as a kid in 10,000 BC and as Ella in the present. This is only possible because Lily and Isaiah traveled through a time portal on the Topanga mountaintop in 10,000 B.C., and so it’s on Eve and Levi to ensure that it happens. If it doesn’t happen, then Gavin’s children — Josh and Izzy — will die, according to Rebecca Aldridge. But if it didn’t happen, wouldn’t Josh and Izzy already not exist? Does their existence not spoil the ending? Or is this one of those Back to the Future deals, where their existence is in flux? Aldridge says that if Isaiah doesn’t make it to the time portal, Josh and Izzy will get very sick and then die, which I assume means in the finale that we’ll get to see Josh and Izzy put on another clinic in the art of writhing in agony.

This week’s episode involves a lot of searching and running. Silas abducted Isaiah last week, but Josh finds him, rescuing him from a saber tooth tiger by crashing his jeep into it. Eve, Josh, and Levi head toward the time portal on top of the Topanga mountaintop by crossing a rope bridge, but Silas manages to abduct Levi and Josh, telling Eve that he will exchange them for Isaiah, but if she doesn’t bring him Isaiah, he will kill Josh and Levi (if Eve brings Isaiah to Silas, Josh and Izzy are gonna die anyway, so ¯\_(ツ)_/¯. Six of one, half dozen of another).

We’ll have to wait until next week to find out if Isaiah makes it to the time portal (spoiler: He will). Rebecca Aldridge — who has quickly recovered from a stab wound in the abdomen — gives Lily a map of various time portals she knows will open up based on her research in the present. The La Brea Sky People have a decision to make: Do they go to the Topango time portal and return to 1988 or do they wait for another time portal to open up into 2021? A gay character is like, “F**k that, I ain’t going back to 1988,” but Lily wants to return to 1988 with Veronica and start their lives all over fresh.

Topside, Gavin — who, again, is actually Isaiah — is adamant about proving to Ella (who is actually Lily) that she is from 10,000 BC. Ella is like, “I don’t remember anything from before I was adopted, but being stuck in 10,000 B.C. sounds a little far-fetched, don’t you think?” Gavin decides to return to the La Brea dig site and finds an artifact that mirrors something Ella has painted, and when Ella sees the artifact, she’s like, “Oh snap!” And then she remembers the map that Rebecca Aldridge gave her in 10,000 BC and pulls it out. It reveals that there is going to be another sinkhole in Seattle.

So, for those keeping track at home: Lily/Ella dropped 10,000 years into the past when she fell into the La Brea sinkhole in 2021, but will travel through the Topanga portal into 1988, live 33 more years, and then give a map she received in 10,000 BC to Gavin, who fell into a sinkhole when he was very little, spent several years in 10,000 BC, traveled to the time portal in 1988 and married Eve, who fell into the La Brea sinkhole in 2021, and then has to help her 12-year-old future husband find the portal to 1988 so that he will meet her in the future and save Seattle residents from another sinkhole.

— Ty, the man with brain cancer, kisses Paara, the leader of the Handprint Community. I wonder if she’s going to find a cure in 10,000 BC for brain cancer that Ty couldn’t find in the present? Or maybe that fresh, unpolluted air will do the trick. Either way, dollars to donuts says that Ty never leaves 10,000 BC. He’s home now.

— The Stoner, with the help of Veronica, finds a cow in 10,000 B.C., and is stoked about all the milk and cheese that will mean for their group. He also finds a barcode stamped into the cow’s hide, which presumably means something mysterious.

— Next week, it all comes together!


← Review: Does 'Venom: Let There Be Carnage' Connect To Marvel? | Demi Lovato, JFK Jr and QAnon Walk Into A Bar... →