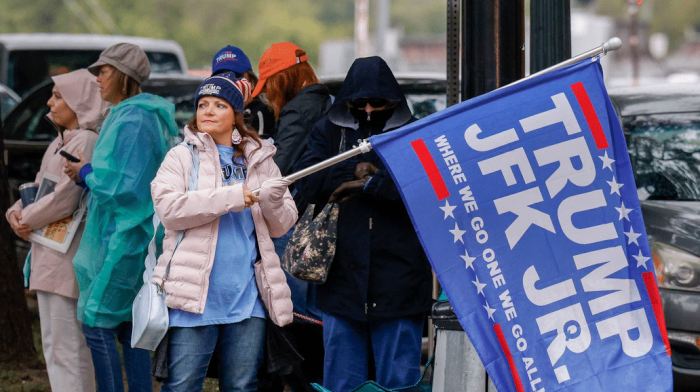 Demi Lovato, JFK Jr and QAnon Walk Into A Bar...

When Covid-19 stopped the world and forced us all into isolation, we had no choice but to sit with ourselves and marinate in our own thoughts for over a year. Is it really any wonder that some of us gave in to our more paranoid delusions and tendencies? I have always gleefully leaned into some of the lower ends of the conspiracy chart. If asked, I’ll tell you that I believe in the possibility of all sorts of things — ghosts, psychic powers, extraterrestrials, Bigfoot, Atlantis. If it was covered in the Time-Life “Mysteries of the Unknown” series, I’m probably in. Remember this commercial?

I love it. It’s fun and harmless to believe that UFOs sometimes fly around the skies of New Mexico. Or that you can contact spirits with a Ouija board. Bending spoons with your mind! It makes for great fiction and laughably engaging documentary investigations. I do lament the loss of Classic History Channel Content back when they covered, you know, actual History. I still enjoy their dives into the unknown. During this time of giving thanks I am forever grateful for this guy: 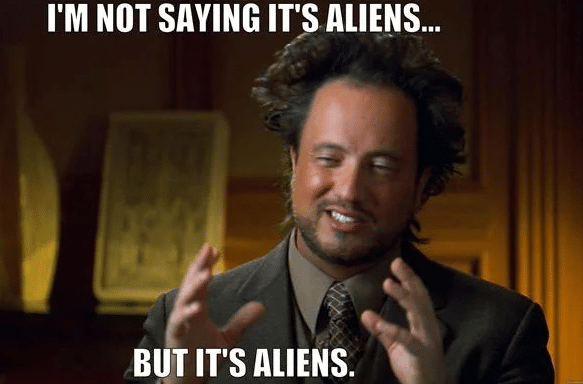 The latest entry into these explorations is Demi Lovato’s four-part series Unidentified, which is currently streaming on Peacock. In the show, Demi, their sister, Dallas, and best friend, Matthew head out on a road trip to meet with members of the ufology community, alien abduction support groups, and paranormal investigators. They talk about Demi’s experiences with ETs, the link between aliens and ghosts, attempt to make contact with space visitors, and meet some mermaids. Demi is the true believer of the trio while the other two are supportive but skeptical. It’s hard to make fun of their earnest open-mindedness and it was interesting to learn about the Native American legend of Star People. At the same time, I mean … come on. They go to Vulture City, Arizona with a group of investigators who call themselves The Wraith Chasers. Vulture City has its own website and The Wraith Chasers were previously featured on a Travel Channel ghost hunting show. Do real ghosts need a marketing plan? No, they’re there in the shadows waiting. Regardless, it’s a fun watch and I recognize that some of this connection to the unknown is a way to process and deal with past traumas. So pass the popcorn. I want to believe. 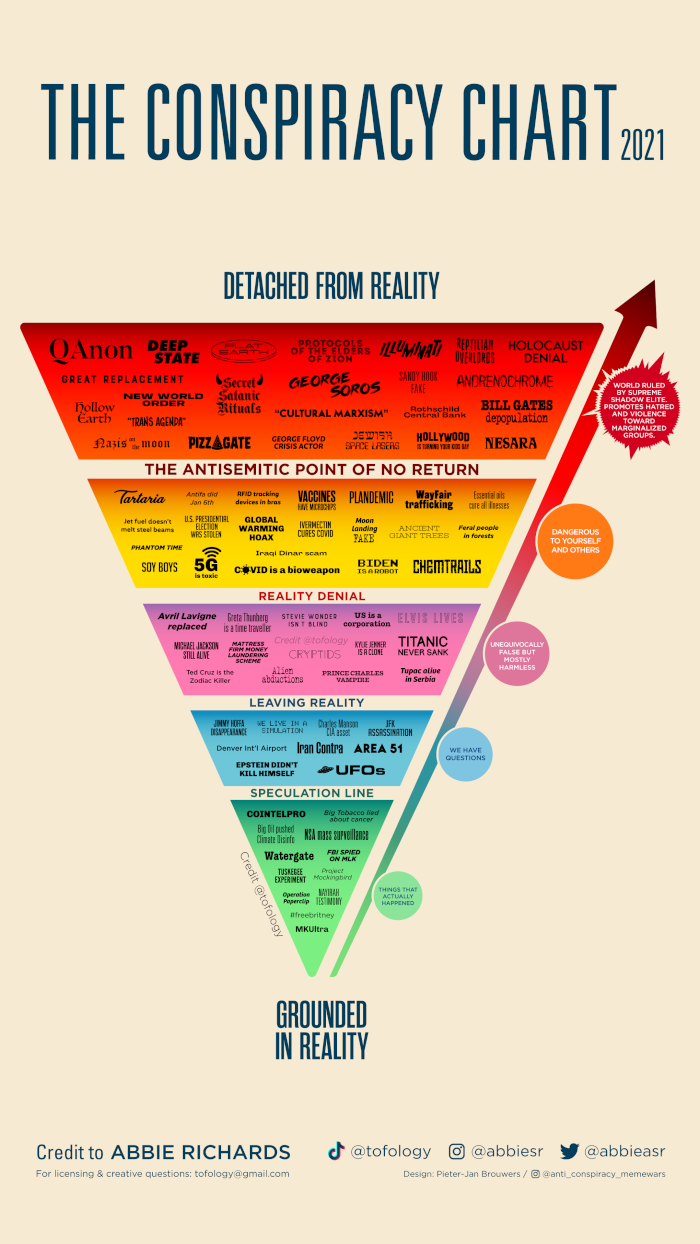 At the top of the Conspiracy Theory Pyramid is where things get super weird and super dangerous. We’ve seen a lot of those beliefs leak into broader American culture in recent years. It’s been informing political debate, the medical field, and generally being inserted into all sorts of places that it doesn’t belong. Stuff like Chemtrails, belief in the Illuminati, and The New World Order have been bandied about for ages. Of course, the rise of social media made it easier for those conspiracies to gain traction and expand beyond the boundaries of that one wacky cousin everyone has who ate bad acid once and now thinks they have proof the moon landing was fake and Lizard People are real.

This brings us to what’s been happening in Dallas, Texas for the past few weeks. Stop me if you’ve heard this one before: a faction of QAnon followers believe that JFK Jr has not only been alive and in hiding for the past 20 years. They also believe that he, John Fitzgerald Kennedy Jr, is a big fan of Donald Trump and will act as his Vice President when Trump is rightfully reinstated. Whenever THAT’S supposed to happen. And, once it does, Trump will then step down making John-John the President. Former National Security Adviser Michael Flynn will then be appointed as his Vice President and then Trump is somehow The King of Kings. Who the hell knows what that means?

Here at Dealey Plaza, where hundreds of QAnon supporters have gathered expecting JFK Jr to reveal himself where his father was assassinated. (JFK Jr. died in a plane crash in 1999.) pic.twitter.com/jssBXpf4iM

Brian Williams referred to this gathering as “the circus of lost souls.” I don’t know if that’s too kind or too on the nose. None of this theory makes ANY sense. Not a single piece of it. There is no universe in which the son of one of our greatest Democrats would endorse Donald Trump for dog catcher, let alone president. Second of all, John is dead. Like, dead dead. Other people died in that plane with him and none of them have returned from the grave (OR HAVE THEY???) So I don’t see why John-John would. Third, there’s no way that if he regained the presidency, Trump would step down for ANNNNNYONE. Then there’s this part that really gets me. I mean, it’s just so offensive and stupid. Mostly stupid. When asked to identify John F. Kennedy Jr, this is the guy they all think is him: 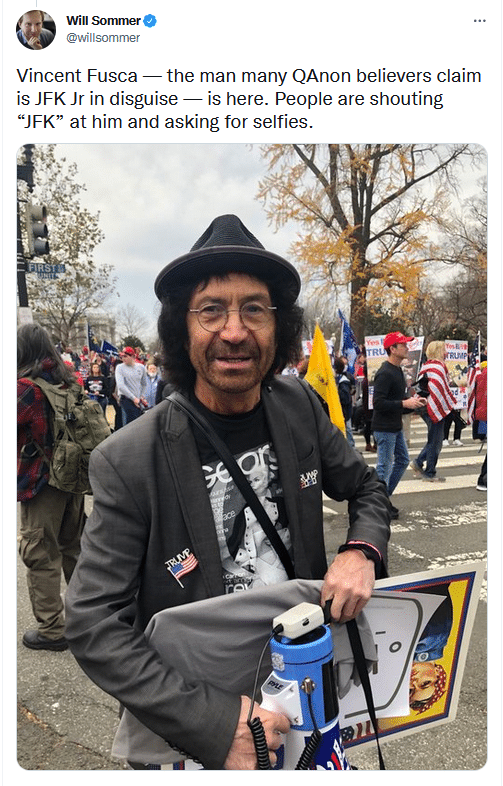 DO YOU SEE THE RESEMBLANCE? IT’S SO CLEAR. JUST LOOK AT HIM! LOOK AT HIM!! Obviously, resurrection has taken its toll on the former Sexiest Man Alive. He looks more like a Marx Brother than he does a member of the Kennedy Clan.

Earlier this week the anniversary of John F Kennedy’s assassination was commemorated in Dallas. There was also a ceremony to mark the end of the 9th annual JFK Assassination Conference, which is apparently a whole other group of conspiracy theorists. Some of whom believe that John F Kennedy Sr is still alive. Or that his death was a conspiracy. Or maybe he was a vampire. I don’t know. I’ve lost track now. Anyway, you can imagine how pleasant it’s been to live and work in Dallas over the last month while all of these nutters converge on each other.

Today is the anniversary of the JFK assassination. I'm at Dealey Plaza for the fifth time this month for a ceremony capping off the 9th annual JFK Assassination Conference. Members of the JFK Jr. obsessed QAnon sect are also expected to be here, promising a clash of conspiracies. pic.twitter.com/3IBZOXIVgY

But let’s get back to the QAnon folks. We all know that this group has been pushing dangerous theories for some time. The longer they go on, the more frightening they get. Crisis Actors at Sandy Hook, Pizzagate, Jewish Space Lasers, it’s all bullsh*t that should be roundly dismissed as such. Unfortunately, people keep feeding the beast. Giving them air time, clicks, page views, and that fuel incentivize them to draw more people into their webs of lies and nonsense. But even the majority of QAnon members think this JFK Jr theory is “too out there.” This subset of QAnon is led by Michael Protzman, aka NEGATIVE48.

Over on Telegram, the messaging app popular with QAnon, NEGATIVE48’s channel has over 105,000 members who all get regular doses of his antisemitic content and are really just there as prey for his financial grift. According to Protzman, JFK and Jackie were (are?) incarnations of Jesus and Mary Magdalene, JFK Jr is the Archangel Michael and Trump is … The Holy Spirit? What? If that’s the case can Dan Brown put a stop to all of this? How about the Pope? Does he hold any sway here? You’d think, but no.

Protzman convinced all of his buddies to head to Dallas at the beginning of November for the big show, where JFK Jr would reveal himself to them. Obviously, things did not go as planned. So, they brushed off their disappointment and went to a Rolling Stones concert instead. Because these folks also think Michael Jackson was framed by The Deep State (and is still alive,) they met him at the concert! How exciting for them, for us, for everyone really. Also confusing. I don’t know how they keep all of these theories straight. I have, like, 18 tabs open right now and I’m completely lost as to how Michael Jackson has anything to do with JFK Jr, or how either of them has anything to do with Trump. But none of that really matters because Protzman has declared himself their God (sure, that fits), and has started telling his followers that they will need to experience physical death in order to learn the real truth. Of what? I don’t know. I just hope they have the right Reeboks.

In case you didn’t believe that #Negative48 and #TheSacredBlueTent are part of a doomsday cult, here’s some lovely audiovisual work that they shared. pic.twitter.com/sA3Nak4nSl

So QAnon has gone pretty quickly from “we want to expose evil politicians and their lies” to “Hey, let’s usher in the end times to solve all of our problems!” Now that’s the sign of a healthy society. I feel terrible for these people’s families, having to lose loved ones to these bonkers ideas is heartbreaking. There’s no chance that Vincent Fusca or Brian Protzman are going to pull off a rubber mask, Scooby-Doo style, and reveal themselves to be wacky villains trying to steal some gold. That would be an easy end. But there is no easy way out of this mess. There aren’t enough deprogrammers in the world to save all of these people or us from them.

How we got from Demi Lovato to Armageddon I don’t really know. Here’s some yarn, there’s a wall. Go make up your own theories. But remember, birds still aren’t real.