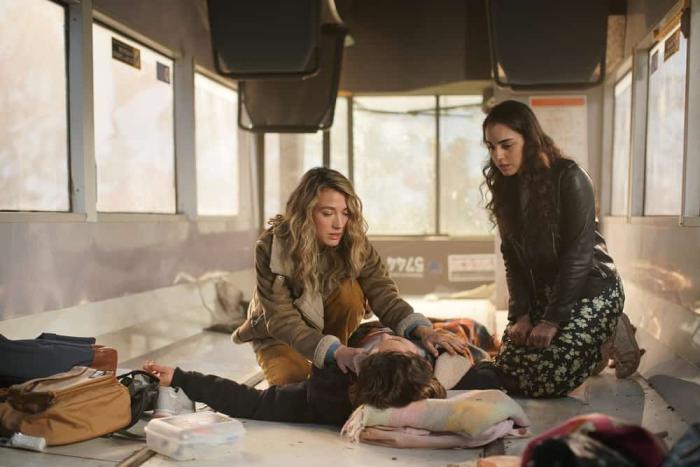 'La Brea' Day Two: What's Up with the Handprint Symbol?

When last we left off, Eve, Sam, and Ty — who had easy access to the inside of an ambulance — were confronted by a saber tooth tiger, and instead of seeking refuge inside the ambulance, they decide to try and … outrun a saber tooth tiger? Their feet are no match for the tiger, but fortunately, Ty had a gun (which he had planned to use to kill himself) and took care of the first tiger. However, they had to escape a second saber tooth tiger by … hiding on the side of a cliff (Fact Check: A tiger has a weak sense of smell, so this tracks).

When they pop back up to ferry the medical supplies back to Josh — whose infection from a wolf bite is worsening — Sam (and the medical supplies) are pushed over the cliff by the tiger. His back is torqued, so Eve and Ty endeavor to carry him back to camp, only Eve eventually abandons them to get the much-needed antibiotics back to Josh before the infection overtakes him.

Back at camp, there’s something suspicious going on with Veronica and her sister — who Veronica claims does not speak (though she does). Their father was the one killed by a wolf last week, and Veronica — who appears to be deeply religious — insists on burying their dad according to Christian tradition. She coaxes stoner dude, Scott (who just happens to have a master’s degree in anthropology) into helping her find her dad’s body. When they find him, he’s been mysteriously positioned by someone inside of a handprint that looks the same as the painted handprint found on the rock last week. Recurring symbol! 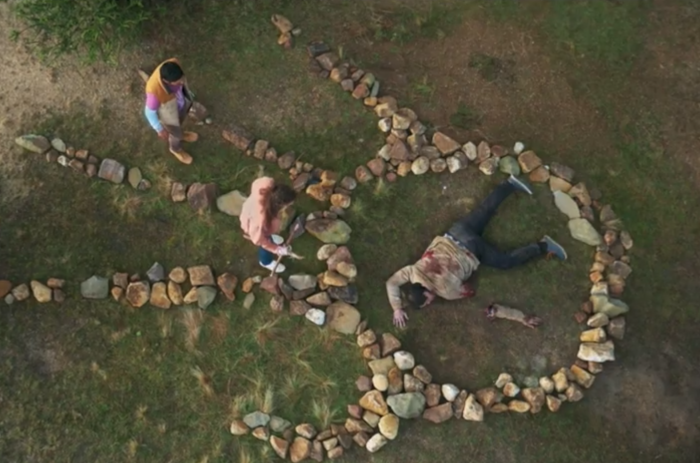 Elsewhere, Marybeth — the cop — is searching for the man with the trunk full of heroin, but not for the reasons we initially expect. The heroin guy, Lucas, is her son, and after Eve leaves Ty and Sam, Lucas stumbles upon them and helps them back to camp, reuniting Sam with her daughter and Lucas with his mother. Eve is also able to get the antibiotics to Josh fast enough to save his life.

Topside is where all the interesting action happens this week. The husband with visions, Gavin, decides to have Eve’s wedding ring — which he found last week buried near the rock with the handprint — carbon dated, and the Department of Homeland Security dates it to 10,000 B.C. That evidence is enough to get an exploratory mission into the sinkhole approved, and they want Gavin to help. Why? Because on the day that Gavin’s plane crashed back in 2018, it was in the Mojave Desert near another sinkhole that had opened up. Gavin’s proximity to the Mojave Desert sinkhole is apparently what gives him the visions, which doesn’t make a lot of sense. Then again, neither does a portal to another time below the surface of the Earth. We’ll let it slide, as long as the internal logic holds up.

In next week’s episode, Gavin lobbies to pilot the exploratory drone, the people in the sinkhole encounter a wooly mammoth, and they find the corpse of someone else from the present day in a cave.

There isn’t a lot of plot advancement this week, but that’s to be expected. From what I understand from network television writers, the second episode is merely a second pilot designed to restate what we already know, namely that these people are stuck in 10,000 B.C., there’s a mysterious recurring handprint symbol, and that Gavin has a connection to the sinkhole.


← This Week On Podjiba: 'Squid Game', 'Ted Lasso', 'La Brea', And More! | Trailer: Do We Need Another 'Cyrano'? Will You Reconsider for Peter Dinklage? →