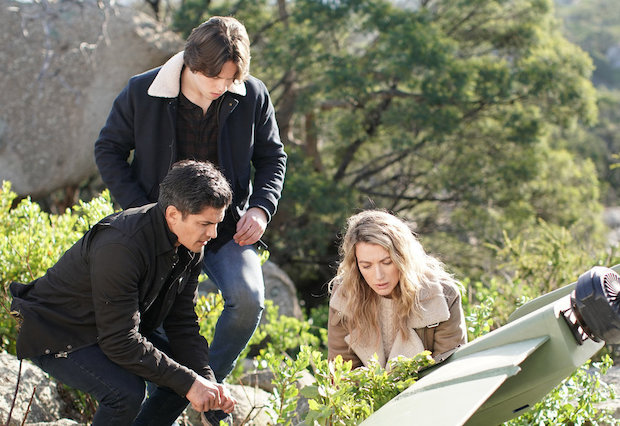 This week’s was another delightfully nonsensical episode of La Brea as attention turned away from the Handprint community and back toward getting back home, to the present. In that effort, Levi used a walkie-talkie he found in the Handprint community to call out to the surrounding area, only to receive a call from Diana, who it turns out is the fiancée of Dr. Nathan. Diana’s plane had flown through the Mojave sinkhole and crashed in Santa Monica three years prior.

Eve and Levi drive their jeep to Santa Monica without roads or without a map or, indeed, without any idea of where Diana is in Santa Monica. When they arrive, they find a skittish Diana worried about her colleague Jonathan, whose corpse was seen in the Handprint community last week. Diana and Levi figure out they can use parts from her drone to salvage his drone and fly back up through the rip in the sky and into the present before the sinkhole closes.

They successfully manage to fix the plane, but topside, Levi’s damaged drone and a number of corpses magically appear underground in the present, signaling to Gavin that Levi’s efforts to return to the present failed. Gavin has to stop it, so he and Aldridge arrange to fly an unmanned drone with a message into the past. Eve and Co. find it with a warning not to attempt to fly home. Eve is adamant about trusting Gavin, who says he will fly into the sinkhole and rescue them before it closes up. Half the camp is like, “No way! We’re taking our chances,” and half the camp is like, “Uh, no thanks.” Eve and Marybeth, however, take matters into their own hands. They drive out to the plane to stop them from taking off, but a shootout between Marybeth and Diana ensues. Diana is killed. The drone is destroyed (and subsequently disappears from the future). All they can do now is pray that Gavin manages to fly his drone into the sinkhole before it closes up.

Gavin, however, bails at the last second when the government threatens to shoot down the drone he is piloting. Aldrige, though, parachutes out of the plane before Gavin lands it (and he was subsequently arrested by the feds). I have a sneaking suspicion that Aldridge managed to parachute into the sinkhole before it closed up.

Before she jumps out of the drone, Aldridge reminds Gavin that his visions are the key to rescuing them. She tells him to “Go back to the beginning,” to “November 16, 1988,” which clearly means there must be another way to retrieve them from 10,000 years in the past. That is a mystery for another day, except I will say that not a lot happened on that day historically, except that Robin Givens sued Mike Tyson for $125 million for libel and Bon Jovi’s “Bad Medicine” was the number one song in America.

In the meantime, Lucas the heroin guy and Scott the Stoner try to locate Lucas’ heroin. Instead, they find a treasure chest full of Civil-War era gold, which probably shouldn’t be buried 10,000 years in the past. Lucas is thrilled because he’s rich, but a fat lot of good that’s going to do him in the Mesolithic period.

Finally, Natalie tells Ty that Veronica not only isn’t her sister but she was kidnapped by a man (now dead) claiming to be her father, too. Ty tracks down Veronica — who fled last week — and tries to convince her to come back to camp. Veronica, however, hits him over the head and leaves Ty behind.

Next week, the camp splits, plus there’s some weather.


← Roy Wood Jr. Examines The History Of Black Horror Movies On 'The Daily Show' | 'I Know What You Did Last Summer', 'Succession', And More On This Week's Podjiba! →