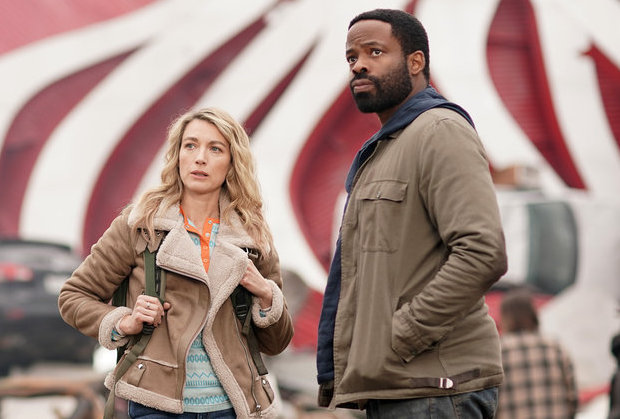 After a BANANAS pilot episode, a restatement of the pilot in the second episode, and a third episode that bordered on dull, La Brea kicked it up this week. Just after complaining that the series wasn’t living up to its cracker-pants potential, the show went and got interesting this week by deepening the mystery behind the hand symbol.

Recall that in last week’s episode, Captain Stephen Delgado — Eve’s former lover and her husband’s best friend — piloted a drone INTO THE SINKHOLE. The drone crashed, but Delgado managed to parachute to safety (and shoot a saber-tooth tiger offscreen). Eve and a few others who saw the plane crash decided to track it down, enabling Eve to reunite with Delgado. He also gave the ring that Eve lost in 10,000 BC and that her husband Gavin found in the present back to Eve, and explained to her that Gavin knew about their affair.

Once they found the plane, however, they discovered that it was no longer operable. The electronics system on it worked, though, and Delgado was able to pick up something on his radar about five miles away, which is … unusual in a land where electricity has not yet been invented. They trekked through a river — where a huge-ass prehistoric snake nearly killed Riley* — and found where the signal was coming from. A fort community had been built, and while Scott — the anthropologist — conceded it could be indigenous people because they did exist at the time (Fact Check: True), the complexity of the structures (and the fact that a signal was emitting from there) seemed to suggest otherwise.

The mysterious handprint was also on the entrance of the community.

We may have been given some clue as to where the community came from topside, where the dispirited feds called off any further search attempts into the sinkhole because the drone that flew into it somehow triggered an earthquake! Very plot-convenient. Gavin, however, could not be dissuaded from trying to rescue his family. He stole a file on a fed’s desk and discovered in it that there were at least four previous occasions in which sinkholes had opened up, including one in the Mojave Desert. He also found the name and location of Rebecca, someone involved with the Mojave investigation.

A visit to Rebecca proved fruitful for Gavin. Rebecca had not only designed the drone that Delgado took into the sinkhole, but she built another one privately, one she configured so that it would not crash upon entrance or set off any earthquakes (what kind of modifications does one make to a drone so that it doesn’t trigger an earthquake, and why didn’t Rebecca promote the use of her drone when Delgado made his first entrance into the sinkhole? Shit. I’m using logic. Sorry!).

The reason Rebecca had designed the new drone is because she wanted to return to retrieve her friends. She had sent an exploratory group down into the Mojave sinkhole and they were trapped there, as well. This may explain the community that exists 5 miles outside of 10,000 BC Los Angeles (never mind that the Mojave Desert is 300 miles away — again, please refrain from using logic on a show built around a sinkhole portal).

One of the members of the handprint community — the mysterious old guy we’d seen before who we now know has a handprint painted on the back of his coat — also inexplicably killed someone in the Los Angeles sinkhole community, It was only witnessed by Veronica, the girl who doesn’t speak. She broke her silence, however, to reveal to Ty what the old man looked like and that he had a handprint on his back.

The big mystery here is how did the old man kill the dude in such a way that it looked like he’d been struck by lightning? 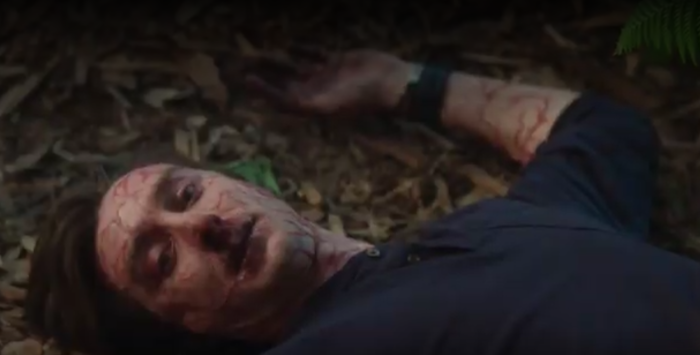 In next week’s episode, they’re going to check out the forts and the community that I’m going to call “The Others.” Four episodes in, and there’s already a “The Others” community! Yes!

* The CGI budget on this show must be skimpy, because not only was the saber tooth tiger shot offscreen this week, but we only caught a brief glimpse of the big-ass snake. Disappointing.