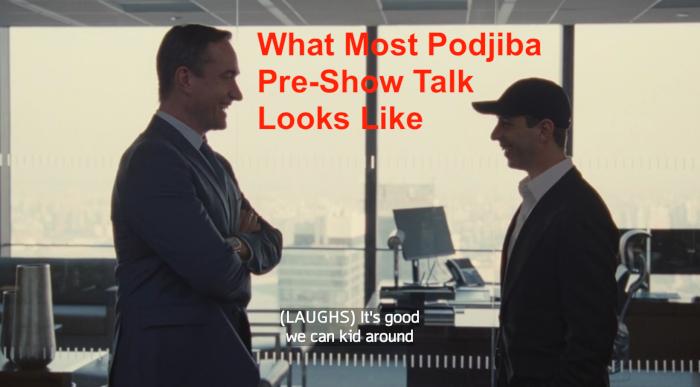 (Note: I don’t like that red font in the header photo either, but the yellow just wasn’t popping right, you understand.)

Sometimes, an episode of Podjiba is defined more by what we aren’t discussing, than what we are.

For example: this week, we do not discuss the return of the HBOMax series Love Life (now with a significantly higher percentage of William Jackson Harper), for no other reason than that we wanted more episodes to discuss (OK, Dustin watched more than one and I only watched the first one and it was agreed that we should wait until at least one more episode has been seen).

We also didn’t discuss the return of Doctor Who, in large part because Dustin was the only one who had seen it as of record time (we’re very sorry!).

Finally, we also didn’t discuss the return of Dexter, mostly because that hasn’t happened yet. Also, I’ve never seen Dexter! I’m sure jumping in this coming Sunday won’t be confusing at all.

In any event, these are all things that you can look forward to on next week’s episode. Maybe!

As for the things we did discuss: Succession (of course)! La Brea (on our award-eligible segment: INTO THE SINKHOLE [plonk] WITH DUSTIN)! And two acronym-y shows, Amazon’s IKWYDLS (I Know What You Did Last Summer), and the season finale of WWDITS (What We Do In The Shadows).

Also, Halloween and Halloween candy! Because despite the fact that 2/3 of your hosts had zero trick or treaters, it is technically a thing that happened all over this past weekend.

Podjiba! Sometimes, it’s about what we don’t talk about. But even then, you can find us wherever podcasts are! Including embedded below, and directly available right here.