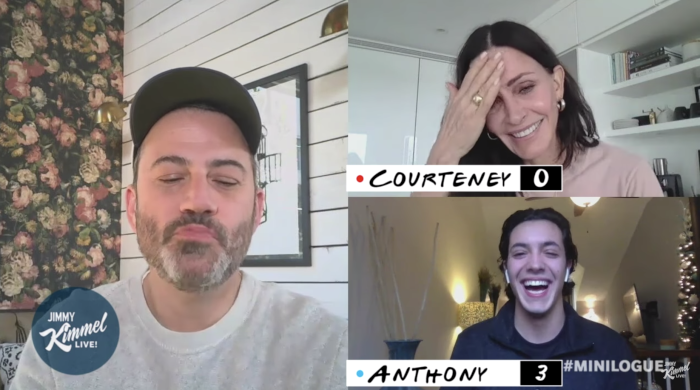 It seems like we’ve checked in on most of the late-night hosts by now. Colbert is in his bathtub, and Seth Meyers is in his hallway, Trevor Noah is laying into the President in his hoodie, Conan is reporting from an empty street, and Samantha Bee is out in the woods.

Last night, Jimmy Kimmel reported from his house and had on guest Courteney Cox who is surprisingly terrible at Friends trivia, because she doesn’t remember anything. In fact, she admits that during the current situation that she has been bingeing Friends for the first time, conceding that she ordered the entire series from Amazon Prime because they are not available on streaming right now. Stars: They’re just like us, except that they can afford to buy the entire series of Friends. Kimmel pit his superfan cousin against Cox in a game of Friends trivia. Cox is hilariously bad.

Kimmel kicks it off with a pretty good monologue, but if you want to head straight to the Friends trivia, that’s at 7:45.