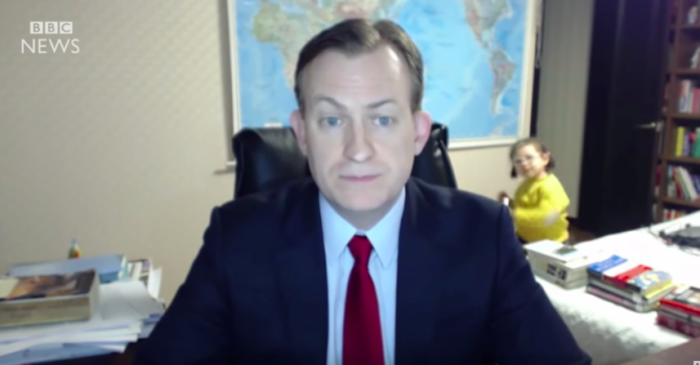 In the spring of 2017, Professor Robert E Kelly and his spunky daughter Marion became a sensation online thanks to a video where his super serious interview with the BBC was gatecrashed by the yellow sweater sporting scene-stealer, followed soon after by her little brother James, and mother Kim Jung-A. Now, the whole family has returned to BBC for an update and advice on how to work from home when you’ve got a very active household.

Jung-A offers tips on how to keep kids occupied, while Marion giddily mugs for the camera and reaches for the mic. James, on the other hand, gets bored and then he comes back with a handheld video game.

my favourite part of the interview was when one of the kids got bored, left and then came back with a computer game pic.twitter.com/lCEl8tuKfo

Naturally, Twitter rejoiced over the return of their Work-from-home King and the princess who became a jaunty meme.

Walking in on coronavirus crisis like the ray of sunshine she is. https://t.co/lyHNyI8G5u pic.twitter.com/L2mQqlPjiQ

The most famous working from home family on the planet are now live on BBC World pic.twitter.com/T9vGrKu8tJ

I am just amazed that it was three years ago. The children have grown up so fast. Glad to see @Robert_E_Kelly and family are doing well.

My favourite is the baby barrelling in in the walker all biz.

Kelly also asks that bosses be kind. It’s not easy to be a work-from-home parent when the kids are there too.

This is what happens when I sit down at my desk now to try to work. It is basically impossible for me to work now. Be kind to your employees with kids. After two weeks penned up in the house, those kids are gonna be climbing the walls. pic.twitter.com/KXquOrM7Lt