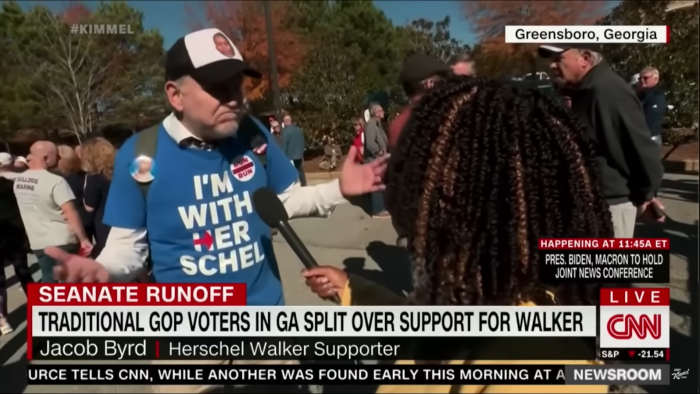 Georgia will be having a runoff election on Tuesday between Raphael Warnock and Herschel Walker. Despite everything about Walker’s campaign and who he is as a person, voters showed up and voted for him. Republicans have made it plenty clear that they’re willing to vote in unqualified people if it means that they win. That unbridled support was put to the test this past week when Jimmy Kimmel sent comedian Jake Byrd to infiltrate a Walker campaign and try to match his incoherence.

Kicking off with interviews of local supporters, Byrd tries to test people’s limits. He’s loud, incoherent, and nonsensical while also pointing out everything wrong with ole Herschel. He regurgitates talking points and mocks the candidate, and his supporters just smile through it. You can see how uncomfortable they are, but some of them seem to revel in it.

It’s kind of depressing how well this bit works. You’d hope that someone running around making driving noises, trying to mock but also represent their candidate, would give some people pause. It is not at all surprising, but it is depressing nonetheless. At least Byrd is hilarious. I always admire Jordan Klepper for slyly pointing out people’s absurdity at Trump rallies, but it takes something special to openly make fun of people without them realizing it.

Jake Byrd even manages to get Herschel Walker to defend one of his most popular blunders. At one point Byrd yells, “do the vampire thing,” and Walker defends it! I was assuming someone would catch on to Byrd’s game and remove him from the rally. Not only does he stay but he also manages to have a catch with Walker. Twice! To be fair, it wasn’t only Walker’s supporters who were fooled. CNN fell for it as well.

I have the monologue cued up to start at Byrd’s bit, that way you don’t have to relive Ye’s hate-filled Infowars nonsense. You’re welcome.