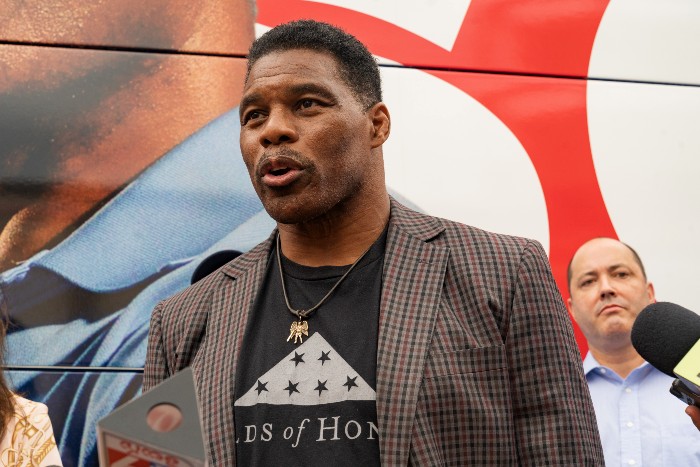 Like most Republicans, Herschel Walker wants a total ban on abortions with no exceptions. Also, like most Republicans, Walker is a giant hypocrite. According to a new report, Walker reportedly paid for a girlfriend to get an abortion in 2009 after he told her that now was “not the right time” for him to have a child. She also felt the same way, so it was a pretty nice option for all parties to have, right? That’s why she’s coming forward. “I just can’t with the hypocrisy anymore,” she said. (Daily Beast)

Either Emily Ratajkowski and Brad Pitt aren’t dating, or he’s extremely cool with her trashing Blonde, a movie he produced. (Lainey Gossip)

Kanye West showed up to Paris Fashion Week with Candace Owens on his arm and a “White Lives Matter” shirt on his back. (Dlisted)

I know this post is about Shania Twain telling Oprah to stop talking about religion, but I honestly thought this was Roseanne Barr for a hot second. I am so sorry, Shania. (Celebitchy)

Sacheen Littlefeather, who declined Marlon Brando’s Oscar for “The Godfather” on his behalf at the 1973 Academy Awards, died Sunday, the Academy of Motion Pictures said. https://t.co/oPMlq3Ify8 pic.twitter.com/4S74L4XXb2

If you’re going to accuse Whoopi Goldberg of wearing a fat suit, maybe make sure she’s actually wearing one. Otherwise, you will be called out on live TV. (Uproxx)

From Lainey: It’s pretty, but DOES IT HAVE POCKETS?? (Instagram)

Thirsting for Jeffrey Dahmer is heinous. Don’t do it. (Jezebel)

We saw how many #Fannibals were excited to hear Hugh Dancy read Bram Stoker's passionate letter to Walt Whitman on #QueerForFear. pic.twitter.com/3opDM6atdh

Game of Thrones is back on its night scene bullshit again. (Variety)

Kim Kardashian got hit with a $1.26 million dollar fine from the SEC for promoting cryptocurrency. (Vulture)

Anana got motivated to finish reading The Witcher series by Andrzej Sapkowski after watching the series. "I loved the ways Sapkowski played with storytelling, exploring how events pass through word of mouth and become distorted and fictionalized, before eventually passing into the realm of myth." Have you read the books? (Cannonball Read 14)

Have you ever seen a beaver try to jump? 😀😀 Watch Spud try to grab a cedar branch that smelled very yummy but was just out of her reach. #beavers #cuteanimals #funnyanimals #wildlife #animalvideos #naturelovers #canada #saskatoon pic.twitter.com/VXYK1Bm2js


← Review: 'Hocus Pocus 2' Actually Improves On The Vibes-Only Original | The Remaining Try Guys Break Their Silence on the Dismissal of Ned Fulmer →