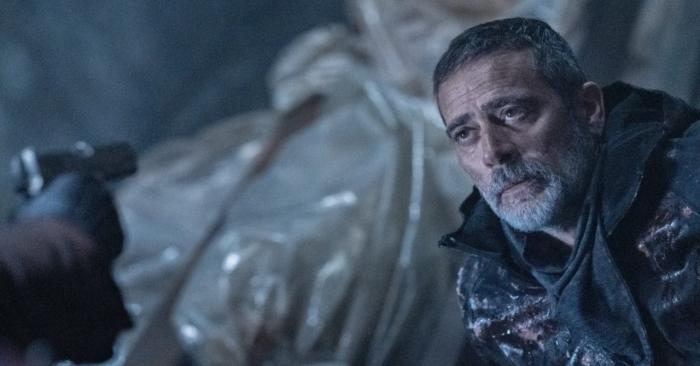 Jeffrey Dean Morgan Didn't Want to Deliver that Glenn Line in 'The Walking Dead,' Either

On Sunday night, AMC aired the 11th (and final) season premiere for The Walking Dead. For those of you who haven’t been keeping up, particularly since the death of Glenn at the hands of Negan in the seventh season premiere, the series has been working on a long, painstaking, two-season redemption arc for Jeffrey Dean Morgan’s character, which partially comes out of the source material, and partially comes as a result of the popularity of Jeffrey Dean Morgan, who has become a fan favorite since the departure of Andrew Lincoln.

That redemption process has taken the form of many years in prison, saving the lives of multiple characters, and putting his own life at risk to save Alexandria from Alpha and The Whisperers. The problem with Negan, however, is that no matter how many ways he redeems himself, or how much he may have changed, it’s next to impossible to get over the fact that he bashed in Glenn Rhee’s brains with a baseball bat. That is particularly difficult to overcome now that Glenn’s wife, Maggie, has returned to the series and serves as a constant reminder not only in her presence but in her appropriate hatred of Negan.

Nevertheless, the writers have made some efforts to overcome Negan’s murderous past, and to Jeffrey Dean Morgan’s credit, he’s transformed the character into someone for whom it’s often hard not to feel some sympathy. His origins story, which served as the 10th season finale, went a long way toward explaining why he was the way he was: Grief and guilt can do a number on someone. Negan wasn’t there for his wife when she died of cancer because he was scavenging for chemo when he was abducted by bad men. In his twisted and grief-stricken mind, he built a community of Saviors and vowed to protect them at all cost, and he believed in his demented mind that the shock and awe of violence and force was the only way to do that. Like Ezekial and others, he built an alternative personality to protect himself.

Look: It’s a TV show based on a comic book. It’s all supervillain 101 stuff.

In this week’s premiere, Negan and Maggie found themselves on a mission together. Maggie still has a lot of hostility toward Negan for obvious reasons, but her character has also become Negan-esque because she has a kid whom she wants to protect. After all, she believes she is always right, and because — like the Negan of old — she insists on loyalty, which can be troubling when she’s leading her people on a suicide mission.

Negan, however, is the only character willing to speak against her. In this week’s episode, he weirdly became the voice of reason in delivering a speech to Maggie about why those loyal to her should not follow her to their deaths. It was a convincing speech, and Negan had won over both Maggie’s loyalists and the audience. That is, right up until he told Maggie that he didn’t want to be dragged through the mud and that he would not allow Maggie to “put him down like a dog like Glenn was.”

He just had to bring up Glenn, didn’t he? That one line destroyed all the goodwill he had built (and elicited a punch in the face from Daryl). The line also didn’t make a lick of sense in the context of this new Negan, and no one understood that better than Jeffrey Dean Morgan himself, who went to showrunner Angela Kang and objected.

I fought it! That’s the one line that I immediately called [showrunner Angela Kang] and I was like, “I can’t say it. I can’t f—-ing bring up Glenn’s name here.” And I was like, “Any goodwill that Negan has gotten on his side is going to go out the window the minute I say Glenn.” I tried to nix the line completely. I didn’t think it was necessary. And I thought, for sure, they would let me change it. And so I filmed it three or four different ways. I tried everything else. I said, “Your husband” and other stuff. but ultimately it was like, “Well, let’s just try the f—-ing Glenn line.” And then, of course, when I saw the cut, I was like, “Oh, f—-ers!” [Laughs] They had to put it in.

Even Lauren Cohan, who plays Maggie, was shocked by the line. “We talked about it,” Jeffrey Dean Morgan told EW. “Before I f—-ing bitched, I called LC, and even she was like, ‘God dang, it’s a lot. Why would you do that?’ I was like, “I don’t know. I wouldn’t.’”

JDM eventually conceded that he understood why they put the line in there, but he doesn’t sound convinced.

I know why it was there, to elicit the reaction exactly that you and I felt in seeing it. I always have said that regardless of what Negan does that is good, there is still that Negan inside of him. And at this point in the story, when that line comes out, it’s kind of that whole speech where I am like, “Why the f—-are we following this woman? I’m living in her head, and she’s leading us to our deaths.” We have no idea what we’re going to do. Negan is the voice of reason suddenly. And had he not said that Glenn line, the whole audience would’ve gone, “He’s right! He’s f—-ing right!” The minute I say that Glenn line, 50% of them, I lose immediately. It doesn’t matter if he’s right.

Even conceding as much, JDM reiterates, “Yeah, when I first read that line, I was like, ‘Goddamnit!’”

I don’t know how it will play out for the rest of the season yet, but it was definitely a step backward for the character, and it seemed so unnecessary given how hard the series has fought to redeem him. I hope it doesn’t prove to be another misstep for the series.