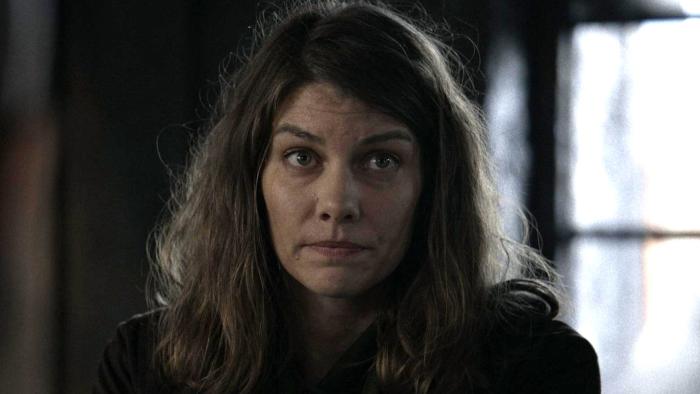 Welcome to the beginning of the end, the final season of The Walking Dead, which debuts on AMC 686 days after the 10th season premiere, which aired in what feels like a completely different era both for television (because of the rise of streaming networks) and the world (because of the pandemic). For those in need of a refresher, the tenth season kicked off in the midst of The Whisperer War, soon after Samantha Morton’s twisted Alpha killed off numerous The Walking Dead characters, and after the fall of The Kingdom. The tenth season itself saw the completion of The Whisperer War; Negan killed Alpha, (nearly) completing his redemption arc; Daryl killed Beta (Ryan Hurst at his most menacing); and Carol led the Whisperer zombie horde over a cliff and to their demise. Maggie also returned after a season-and-a-half away, appearing briefly in the original tenth season finale, arriving in the nick of time to save Gabriel and others from a gaggle of Whisperers. Elsewhere, Eugene, Yumiko, Ezekiel, and the newest character, Princess, encountered the soldiers of The Commonwealth, a new and advanced civilization, and the likely setting for the conclusion of the series.

Because of the pandemic, six months separated the penultimate episode of the 10th season and its finale, and then AMC tacked on six more episodes of mixed quality to bridge the gap between seasons. Those episodes did little to advance the plot, although they did introduce a mysterious new group of villains called The Reapers that followed Maggie from her old stomping grounds. In addition to finally providing us with Negan’s empathetic origins story, the episodes also reminded us that even though Negan had brokered a fragile truce with most of Alexandria, Maggie had appropriately not forgiven him for murdering her husband, Glenn. Glenn’s death was also the moment when the series began shedding millions of viewers, though the quality of the series itself improved dramatically in the ninth and tenth seasons under the stewardship of showrunner Angela Kang.

The final season will consist of 24 episodes that will air in 8-episode chunks. This will take us until the end of 2022 when a Daryl and Carol spin-off (and eventually, a Rick Grimes movie or series of movies) will fill the void along with Fear the Walking Dead, which somehow kicks off its seventh season this fall alongside The Walking Dead: The World Beyond, which will finish out its planned two-season run.

With the catch-up disposed of, the final season kicks off with a terrific 10-minute cold open, which sees the show’s female characters led by Maggie, Carol, and Magna, navigate a new-to-the-tv-series variety of zombie: The lurker. Lurkers are zombies that have gone into hibernation, although even the quietest of sounds — or in this case, a drop of blood — can rouse them. The mission is to navigate a hornet’s nest of soldier lurkers to retrieve MREs from a military outpost. Daryl and the men provide cover from a platform above. It’s an effective way to bring many of the characters together to kick off the season. You may also notice there isn’t a word of dialogue in the cold open, only the sounds of arrows and bullets splatting zombie heads. You might also recognize the use of handheld digital cameras, which gives the final season a more cinematic look and feel.

After the completion of the mission, Maggie, Daryl and Co. return to Alexandria tired and beleaguered, where they also discover that a few of Maggie’s friends from her old settlement have joined them. I’d list off their names, but most will probably be dead by the fifth episode, so what’s the point? They represent more mouths to feed, in addition to the faltering efforts to rebuild Alexandria in the wake of the Whisperer War. They have a week’s worth of rations left, no more ability to grow their own food, and the surrounding areas have already been ransacked.

Maggie offers a potential solution, one described as a suicide mission by many in the community. She suggests returning to her old settlement in D.C., where most of her people were massacred by the Reapers, and collecting all the food and supplies they’d left behind. All she knows about the Reapers are that “they come in the dead of the night, and that by the time you see them, you’re already dead.” Because they are television-only creations and do not have a comic-book counterpart, it’s all we know about them, too.

The writers contrive a reason for Negan to go along on this mission, namely that — even though it’s Maggie’s old settlement — they need Negan to help them traverse D.C. because he’s more familiar with the area. Negan reasonably assumes that Maggie has an ulterior motive, which is to lure him away from Alexandria and kill him. Maggie, who leads the mission with dictatorial fervor, holds a gun to Negan’s head and lets him know otherwise after Negan unwisely reminds her that he put her husband down “like a dog.”

“The woman who left six years ago is not the one standing over you now. There’s a little bit of her left in me, and that little bit is the only thing keeping you breathing,” Maggie says in that particularly thick and unconvincing Southern drawl that comes out when she’s angry. “Keep pushing me, Negan. Please.”

Their mission takes them through a mass grave in a subway tunnel, where hundreds of bodies wrapped in plastic lay. They’re also lurkers, so Maggie’s crew must stab each one in the head to put them down. Unfortunately, by the time they reach the other side of the mass grave, the tunnel is blocked by a subway car and a horde of zombies approaches from behind to pin them in. With no other way around, they all climb over the top of the subway car, except that Maggie is pulled down by the zombies while trying to climb up. When she asks Negan for help, he stares at her for a moment and walks away before the credits roll. Cliffhanger.

This feels vaguely similar to the situation in which Glenn appears to be pulled apart by zombies in a sixth season cliffhanger only to survive by hiding under a dumpster. The Walking Dead got a lot of shit in the middle seasons for overusing cliffhangers — particularly that one — but to be fair, Angela Kang does it far more sparingly, plus I doubt anyone actually thinks that Maggie will die; she has way too much plot armor (the bigger issue with Glenn’s fake-out is that the cliffhanger wasn’t resolved for several more episodes). The question here is whether Negan returns to save her, or if Daryl — who follows his dog, Dog, along the side of the subway — is the character who rescues her. If Negan does leave her behind — and the “next on” scenes strongly suggest as much (although it may be a misdirect) — the writers will have dug themselves an even deeper hole for Negan. If the rest of Alexandria thinks he left Maggie behind to die, there’s no way they (or Maggie) let him survive, which is complicated by the fact that Negan has as much plot armor as Maggie.

Meanwhile, the B-plot sees Eugene, Yumiko, Ezekiel, and Princess interrogated by Commonwealth bureaucrats for seven hours to determine whether they are worthy of admission. They’re drilled about their health history, education levels, and their pre-apocalypse professions, among other things. The questions may seem unimportant, but they will actually play into how the Commonwealth categorizes its citizens, which is a tease for the sort of class warfare that is to come in the final season. This subplot allows us to learn a little more about The Commonwealth and brings some much-needed levity to the episode (Princess, in particular, gives the series a jolt of personality). The foursome eventually decides that attempting to immigrate into The Commonwealth isn’t worth the risk of the mysterious “re-processing” the Commonwealth does for those who are not admitted. Posing as Commonwealth soldiers, they decide to split. On their way out, they encounter the Wall of the Dead.

This was a pivotal moment in the comics. The Wall of the Dead includes pictures of loved ones lost by citizens of The Commonwealth — these people are expedited into the community by virtue of their relationship to someone inside. In the comics, Michonne finds her daughter on the Wall of the Dead, which leads to an emotional reunion. Here, Yumiko learns that her brother is a citizen, which doesn’t carry quite the emotional wallop, both because we don’t know Yumiko as well and because we have little knowledge of her brother. Still, it’s enough for Yumiko to scuttle their plans to sneak away. “I have to stay,” she says at the conclusion of the episode’s B-plot.

The bullsh*t cliffhanger aside, it’s a solid opening episode that furthers the story with The Commonwealth and continues to build tension between Negan and Maggie ahead of an encounter with another villainous outside group. On the other hand, I feel conflicted about the way that Maggie is being characterized. She’s more like Rick during those Ricktocracy days early in the series, while Negan — who murdered her husband among many others — is depicted as the wounded, empathetic voice of reason. If he himself hadn’t brought up Glenn, Maggie wouldn’t have scored any points with the viewers. I appreciate that they’ve put the work into Negan’s redemption arc — Angela Kang has invested two full seasons to it — but they shouldn’t further it to the detriment of Maggie’s character.

We’ll see how it continues to play out next week.