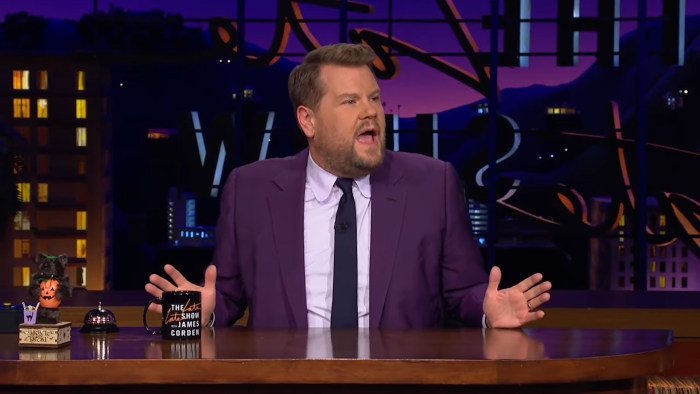 In times like this, there is a moment from The Fresh Prince Of Bel-Air that comes to mind. Ben Vereen, guest-starring as Will Smith’s absentee father, Lou, runs off on his son again. When Uncle Phil attempts to scold Lou for his errant ways, Lou makes an exclamation that has always stuck in my head. I am going to make the same exclamation now, as I sit down to write about James Corden and Ricky Gervais.

Here I am, on my least favorite day of the year, writing about everybody’s least favorite late-night host (which is really saying something). Last night on The Late Late Show, Corden made a joke about Elon Musk’s plan to charge Twitter users to keep their blue check mark. The idea has gone over about as well as you’d expect. So, like most people, Corden made a joke about Musk’s proposed plan. The problem is, the joke seemed very familiar to one eagle-eyed Tweeter.

In which James Corden basically does a Ricky Gervais joke word for word pic.twitter.com/8MfkrBo8Y0

As @RupertMyers shows, the joke is almost a word-for-word copy of a Ricky Gervais joke. I was expecting maybe a changed word here or there. No. It’s pretty hard to deny how similar the jokes are. The thing I will say in Corden’s defense is that the joke feels more like a “schoolyard” joke if you will. It’s not super original, nor does it possess a super specific point of view. Still, you’d think that Corden would be extra careful given his current spotlight. This makes me think: Is there more to this than meets the eye?

I’m not big on conspiracy theories, but sometimes weird coincidences make too much sense! In this case, I’m thinking about Corden’s writing staff. Likely, Corden did not write this joke himself. That’s what his writing staff is for. So, could some writer, fed up with Corden, have slipped Corden a Gervais joke in an attempt to embarrass him further? It seems crazy, but there’s no way this would have gone unnoticed. While I can believe that this is all one big accident, I would also believe that at least one person on Corden’s staff has had to witness him berate service workers before.

I’ve written positive things about Corden before. Early on in my time here, I praised a sketch he did with Armie Hammer. So, clearly, my judgment is impeccable. I just don’t want to hear about him anymore. Is that too much to ask?