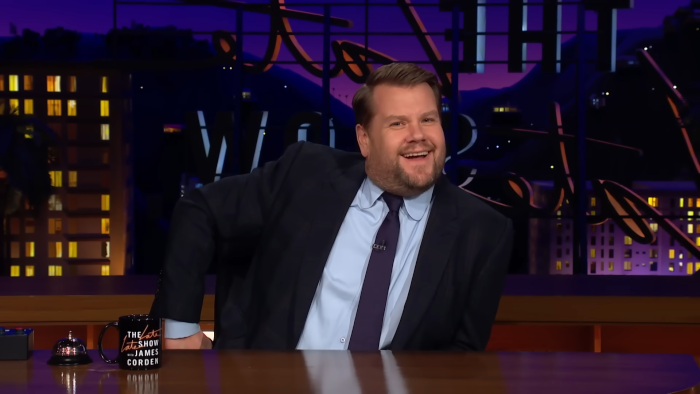 I honestly think that if James Corden had never addressed his banning from the NYC restaurant Balthazar, it would have blown over. Stories of Corden’s social improprieties have circulated for years. He’s leaving his late-night show in 2023. Keeping quiet would only benefit him. If he had actually not explained and not complained, it would have just become another story in a quickly moving news cycle. Instead, he spoke about the incident in the New York Times. Then, after a long weekend, he addressed the stories head-on on The Late Late Show. Kind of.

Corden opened his show by issuing a public “apology” for his behavior. At least, that’s what most of the headlines say. I wouldn’t call what he said an apology as much as an explanation of some of the events from his point of view. In a move that should have smoothed everything over, Corden managed to make things a thousand times worse. He sat his parents in the front row while he went into a mildly self-deprecating spiel that feels as genuine as Liz Truss saying she’s “not a quitter.”

The whole thing feels like a giant dodge. He highlights the things that make him seem apologetic or even in the right, and skates over the more damning details. For instance, Corden focuses mostly on one of the two Balthazar incidents. His wife was served food she was allergic to not once, but three times. That is something to be understandably upset about. Accidents happen, but Corden gets to say that he stood up for his wife. Even though, according to other stories, he does not do that often. Even if she is holding their crying, infant baby and trying to retrieve her luggage (allegedly).

It’s how Corden briefly glazes over the other incident, in which he berated staff for finding a hair in his food, that is more damning. First of all, he dismissively states that this happened in 2014. If that’s true, it means he has a pattern of this behavior. Imagine all the other servers he’s yelled at in the eight years since. He denies yelling recently, but not when it comes to the hair. He only looks bad in that situation, which is likely why he barely discussed it.

James also doesn’t discuss his New York Times interview. At all. It’s an interview in which he referred to the whole situation as “silly.” It’s in speaking to the NYT that he did the complaining his father advised him to explain. He claimed that no one outside of Twitter was talking about the incidents. It is nothing but defensive and dismissive and makes this on-air apology ring as hollow as this tiny cretin’s heart.

Corden caps things off by claiming that the next time he’s in NYC, he will apologize to the Balthazar staff personally. If he is allowed inside, that is. I’m sure the owner, Kevin McNally, will allow it to happen. The dude seems to revel in the attention. If Corden does return, tail tucked between his legs, and “apologizes,” it will be the clearest indicator that this is not and has not ever been about the hard-working people he chastised. It’s all about this shallow man and his fragile, inflated ego.