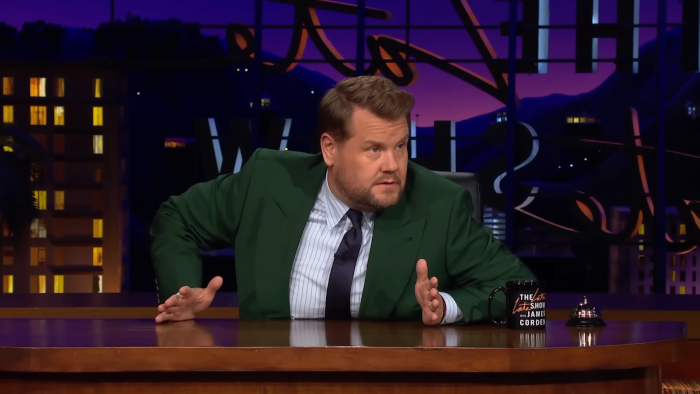 Several times a week, I work shifts bartending at Broadway theaters. I’ve done it for the better part of a decade. It’s a great way to earn extra cash, see shows, and meet other creatives. Some people I work with use the job for their full-time income. Others are just trying to get out of the house. There are also a lot of people, fresh out of college, doing the job while they go on auditions. The theater/front-of-house industry is very similar to other service industry jobs in this way. Employees come in all shapes and sizes. So, I was understandably perturbed when I heard about a recent incident involving late-night host James Corden.

For those unaware, restauranteur Keith McNally took to Instagram yesterday to ban Corden from his NYC restaurant Balthazar for being rude to his staff on two separate occasions. In one instance, Corden found a hair in his food, waited until he had finished eating, and then berated the manager, insisting he receive free drinks and his last drinks be covered. Finding hair in your food is not ideal, but it happens. I severely doubt anyone put it there maliciously but Corden reacted in a “nasty” manner, according to McNally. He even threatened to leave a negative Yelp review, just to go Full Karen in the situation.

A second time, there was a mix-up with the food Corden’s wife ordered. She asked for an egg-yoke omelet and there was a little egg white in the yolk. The nerve! The food was brought back and returned but this time with the wrong side. So, naturally, Corden began yelling at the server. The manager came and cleared things up, but Corden continued to be nasty to the server because that’s what tiny men do. You can read the post in more detail below.

McNally banned Corden from the restaurant and called him a “tiny cretin of a man.” I was pretty impressed by this move! Having worked a lot of service jobs, I’ve had plenty of bosses who would not stand up for their employees this way. Especially not publicly. However, the tide apparently turned later on in the day. Corden called McNally, apologized, and the restaurant owner rescinded the ban. You can see that in this post.

Whether I agree with McNally accepting Corden’s apology or not, it’s objectively hilarious that he used bad, blurry photos of Corden in each post. It’s what he deserves, the bare minimum. Concerning the apology, I would love to know what was said to the staffer. McNally appears to allege that Corden apologized to the staff, but given how he became friendly with the manager but continued to be rude to the server during the egg yolk situation, I don’t buy it.

It’s also worth noting that this incident caused others to share horror stories about James, and they did not involve him dressing up as a rat and air-humping traffic. I can’t confirm that any of the following stories are true, but I will say that hearing the others from the owner of a restaurant, in a very public forum, I’m inclined to believe that Corden has been rude to others. Even if those others include the same wife he yelled at a server for. As the old adage goes, if you see one cockroach in your home, it means there are others.

Obsessed with these stories of James Corden being terrible pic.twitter.com/z5hiMY6pqO

I honestly wish that McNally had not forgiven Corden. I’ve served a lot of celebrities over the years and, in my experience, most of them don’t go out of their way to be mean. More often than not, they want a quiet night out like everyone else. Now and then they go out of their way to be nice and polite. But, occasionally, you deal with someone who wants to use their celebrity status to be an insufferable prick. It is not behavior that occurs suddenly. It is learned and honed and unleashed at the slightest inconvenience.

It’s also incredibly dumb behavior. I cannot emphasize enough that, when I’m bartending, I’m much more inclined to help a customer if they are nice and polite as opposed to rude and nasty. Whether something went wrong or not, you catch more flies with honey. It’s common sense. Unfortunately, Corden has likely had a different experience in the past. He probably gets his way when he throws a fit, which is why he was so quick to apologize. Hopefully, he learns from the situation, but I doubt it. Tiny men don’t learn, they just get tinier and tinier.


← Whatever Happened to Peter Billingsley, Ralphie from 'A Christmas Story'? | Political Polls Are Junk →