What's Going On with Max and Helen on 'New Amsterdam'?

The pandemic has obviously had a profound effect on the way we all set our priorities, and the reordering of priorities has led to a lot of transitions. We see it clearly in the labor market, where burned-out nurses and teachers are leaving their jobs by the hundreds of thousands, where restaurant workers have abandoned those jobs in droves, and even where professional workers have taken new jobs that allow them to continue working at home (recently, even I left my position at Uproxx after a decade to literally spend more time with my family and focus on what I love to do the most: Pajiba).

These changes are not exclusive to the staff at Chipotle (although sometimes it feels like it). We’ve seen some upheaval in the entertainment industry, as well. Actors are giving up secure jobs on television shows with long hours to focus more on themselves and their families. Kellan Lutz left FBI: Most Wanted after losing a daughter; Damien Lewis, who lost his wife Helen McCrory earlier this year, is clearly working from the UK on the back half of Billions (his character is quarantined after a COVID exposure); Titus Makin, Jr. left The Rookie; Emily Vancamp left The Resident; Cush Jumbo left The Good Fight; and Emily Wickersham left NCIS, among others.

The hospital drama New Amsterdam has likewise experienced turnover, losing Anupam Kher last year, who exited during the pandemic to care for his wife, Kirron Kher, who is battling cancer. Lisa O’Hare also left the show in the beginning of the second season while Janet Montgomery took a long break from season one after giving birth.

Given the nature of the world, and the cast turnover on New Amsterdam, there’s reason to be worried that the two most high-profile actors on the series, Ryan Eggold, who plays Dr. Max Goodwin, and Freema Agyeman, who plays Dr. Helen Sharpe, may leave this season, as well. The story arc is strongly suggesting as much. In the season premiere, Dr. Goodwin and Dr. Sharpe finally not only decided to be together romantically, but Max — in his pursuit of “joy” — decided to leave New Amsterdam as medical director to move to London with Dr. Sharpe, who wants to be closer to her family. It’s not a fake-out, either. Showrunner David Shulner insists that they are going to London. “No one believes me when I say that Max and Sharpe are going to London,” he told TVLine. “There’s a lot to do before they leave. There’s a lot to put into place before they go. But they’re going.

What that means for the series is anyone’s guess. Max is searching for a candidate to replace him on the show, and his boss, Karen Brantley (Debra Monk) reaches out to Dr. Veronica Fuentes (Michelle Forbes) to replace him. Though we’ve only been given a brief look at Dr. Fuentes, her character has been described as “a calm, poised and fearless fixer who is brought in to reconstruct the failing hospital” and “clean up the inept board.” 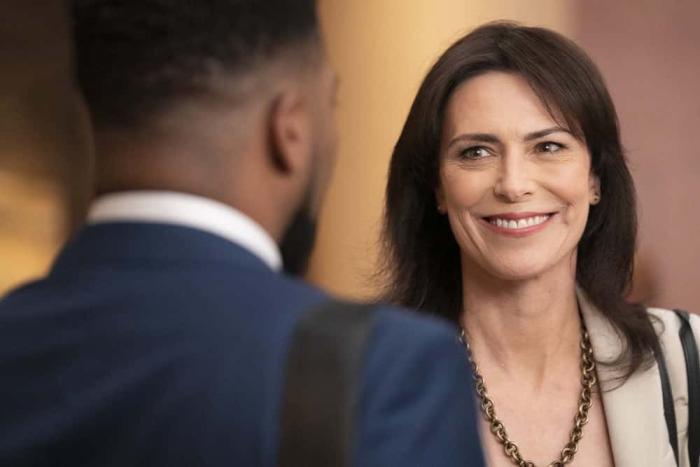 Having a “fixer” come in and undo all of Dr. Goodwin’s changes may give Max reason to return after he and Helen relocate to London, but I wouldn’t bet the farm on Dr. Sharpe returning, as well. There have been no exit announcements made regarding Freema Agyeman, but given the flux in the entertainment industry and the fact that Agyeman is based in London, I wouldn’t be surprised if — after the two move to London — she doesn’t return. It’s possible that the series splits time between New Amsterdam and the clinic that Max and Helen plan to work in over in London, but given that the show is called “New Amsterdam,” that seems unlikely.

In the meantime, it’s nice that the series itself has returned to mixing character arcs with cases of the week after a COVID-shortened season in which each week seemed to pick up on an issue-based theme. Dr. Iggy Frome (Tyler Labine), for instance, has quit seeing patients and instead decided to teach therapy residents. Dr. Bloom is exploring a new relationship with a woman she helped to land a residency at New Amsterdam; and Dr. Floyd Reynolds (Jocko Sims) is in the middle of an open marriage. He’s sleeping with his boss’s wife … with permission. The problem is, he’s fallen in love with her. It’s awkward. They’ve also introduced a new character, Dr. Wilder, played by deaf actress Sandra Mae Frank, whom Max is trying to groom to replace him.

Next week, it looks like Karen is going to try to talk Max and Helen out of relocating.