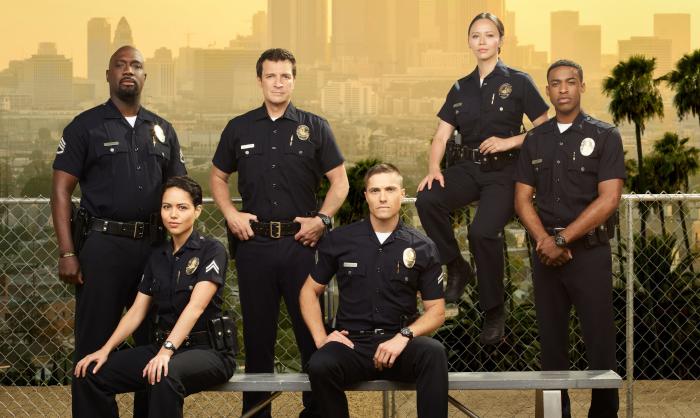 Yet Another Cast Member Departs 'The Rookie'

I’m not entirely sure what’s in the water over on The Rookie, but in the fourth season finale, the series saw the exit of a third original cast member following Mercedes Mason in the first season and Afton Williamson in the second season. Williamson quit after alleging that showrunner Alexi Hawley ignored her sexual harassment complaints (an internal investigation found no wrongdoing, for whatever that is worth).

The latest departure is Titus Makin, Jr. who played Officer Jackson West on the Nathan Fillion series. In last night’s preposterous season premiere, an actor standing in for Officer Jackson is shot in the back in the opening sequence in a hit arranged by the head of a drug cartel, Sandra “La Fiera” De La Cruz, who also abducted a pregnant Angela (Alyssa Diaz) and absconded with her to Guatemala with the intention of stealing her baby and killing her. Three beat cops — including Nathan Fillion’s John Nolan — blackmailed a governmental black ops outfit to fly them to a Guatemalan compound where they retrieved Angela and killed De La Cruz. Meanwhile, in L.A., Sergeant Grey (Richard T. Jones) found Officer Jackson’s shooter and, after contemplating shooting him for killing Officer Jackson, remembered that The Rookie has made earnest attempts to address police violence since last season and arrested him instead.

As for why Titus Makin, Jr., did not return to the series? It’s anyone’s guess. Showrunner Alexi Hawley only noted that the character’s death was “heartbreaking,” but as he told TVLine, he had no choice because Makin, Jr. “wasn’t coming back, and because of the way we set things up with the [Season 3] finale, there was just no way to tell that story without Jackson … But we lean really hard into honoring how he was the heart of the show, and it was definitely impactful for us to have to deal with that.”

Makin, Jr., himself has been mum about his departure, and Hawley hasn’t provided any more details. Makin Jr. also hasn’t posted to social media since early June. He may have decided he wasn’t comfortable working on a cop show — and his character was the victim of brutal racism last season at the hands of a character played by Brandon Routh — or it may be that Makin, Jr., who performs as Butterfly Ali, wanted to turn his focus toward his music career.

If the rest of the season is going to be as deeply absurd as last night’s episode, the show itself may see the exit of a number of viewers as well. How does a show about newly minted Los Angeles beat cops end up in a rescue mission in Guatemala involved a drug cartel and a top-secret black ops governmental organization?