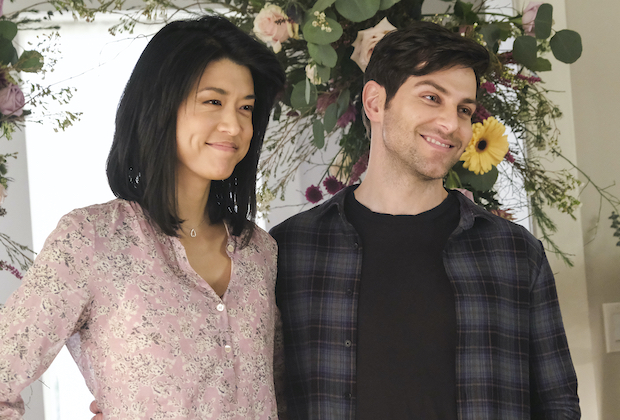 The A Million Little Things second-season finale aired last night, and it was sloppy. I love these characters — and I have for two seasons — but creator DJ Nash has a knack for bad storylines, trite soap tropes, and forced mysteries. It is definitely a series where the cast is doing a lot of work to transcend the writing.

To his credit, however, the series seemed to be well poised to put a bow on all the different storylines and end the season in a satisfying way: Eve would have Rome and Regina’s baby, Eddie and Katherine would renew their vows, Delilah’s kids would encourage her to date Miles; and Maggie and Gary would get back together. DJ Nash, however, subverted all of our expectations, with the exception of Delilah and Miles (although Parker Young (Suburgatory) may not return next season anyway, because of other commitments).

Rome and Regina — Eve had the baby. Rome and Regina are elated. Rome holds the baby and bonds with the baby. Predictably, Eve takes the baby away, deciding that she cannot give it up, and as though to pour salt on the wound, credits Regina and Rom for giving her the strength and confidence to raise the baby. Rome is crushed. Regina is very angry with Rome for letting her get her hopes up and attached to the idea of being a mom. That was it. As a cap to their season-long storyline, it fizzled. How does this shake out in season three? Probably Regina decides to get pregnant and have a biological child with Rome. Their marriage will be fine.

Gary and Maggie — While at the hospital awaiting the birth of Eve’s baby, Maggie finally tells Gary that she’s still in love with him. “We’re Gary and Maggie!” Gary doesn’t take it well. He admits that it’s the only thing that he’s wanted to hear from her for months, but now that he has finally moved on with Darcy, he’s angry with her for waiting too long. He rejects Maggie, and Maggie goes to the airport in tears. However, Gary — in what appears to be a mad dash to the airport to win her back — gets to Logan only in time to apologize to Maggie, tell her that he was being spiteful, that he didn’t mean it, and that he doesn’t want to lose her. As a friend. Ouch. Maggie goes to Oxford, and Gary goes back to Darcy.

Eddie and Katherine — The episode begins with Katherine and Eddie setting their house up to renew their vows, but midway through, they decide to relocate the ceremony to the hospital to be with Rome and Regina, as well as Maggie before she flies to Oxford. However, Eddie is still hung up on the death of Alex, a ridiculous late-season storyline designed to lead into the major mystery in season three. Alex’s sister, Colleen (Betsy Brandt), basically shows up for no reason at all and says stop digging in the past and gets into Eddie’s head. He races back to the site of Alex’s death, finds a pair of pants that his sister hid underneath a beach house on the night of Alex’s death, and finds Alex’s bracelet in his own pocket.

Convinced that he may have had something to do with Alex’s death twenty years ago (and seriously, who even is Alex, and why are we supposed to care?), Eddie heads straight to a bar, where he contemplates taking his first drink after 10 years of sobriety. At the last second, however, he opts against it, calls Katherine and apologizes, and tells her that all he wants to do is race home and renew his vows with her, which is precisely when a truck mows him down in the middle of the street! Yes! Did you do that just for me, DJ Nash?

It worked a lot better on Felicity.

Will Eddie die? Is he leaving the show? Will it be renewed for a third season? No, no, and probably! Likewise, expect that Maggie will be back, although by that time, Gary will be broken up with Darcy, and Maggie will bring back a new British boyfriend. It’s all very predictable, but hell if I don’t love these characters anyway. Except for Eddie. Because Eddie is the worst.

← Meet The Goop Contributor Who's Decided The Pandemic Is Fake, Just Like AIDS! | Forget 'Contagion', The Lonely Island's 'YOLO' Was The Real Prophecy All Along →