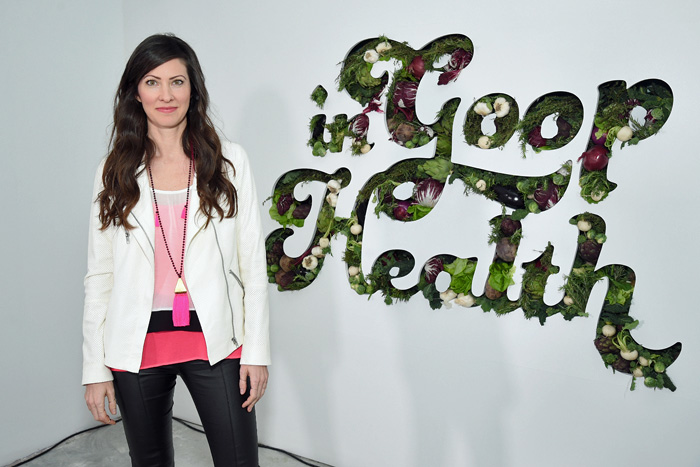 As we continue to barrel into our current nightmare with a turgid, amoral yam at the wheel, it was only a matter of time until one of the brain geniuses at Goop got snatched up for peddling dangerous conspiracy theories and/or some sort of snake oil remedy that you shove up your butt. And sure enough, one of them did.

Meet Kelly Brogan, a longtime Goop contributor who has found herself in a world of sh*t after The Daily Beast caught wind of a Facebook video the “holistic psychiatrist” shared with her subscribers.

It, uh, had some interesting claims.

In the video, which was originally shared with paid subscribers of Brogan’s “health reclamation” program, Vital Life Project, and has since been viewed over 75,000 times online, Brogan claimed that “there is potentially no such thing as the coronavirus” because “it’s not possible to prove that any given pathogen has induced death,” and that the rising death toll caused by the virus is “likely being accelerated by the fear [of the virus] itself.”

She also professed that she doesn’t believe the widely accepted germ theory of disease, encouraged viewers to seek alternative theories, suggested that the news media is being controlled by an unnamed pro-vaccination group, and speculated that the U.S. government is planning “to link our passports with our vaccination records” and gain “totalitarian governmental control not unlike the divide-and-conquer dehumanization agendas that preceded the Holocaust.”

When The Daily Beast reached out to Facebook for comment, the social media company yanked the video like it was a common Federalist article full of reckless horsesh*t that’s going to get people killed. As for a spokesperson for Gwyneth Paltrow’s sex snake emporium, they declined to comment outside of breathing a sigh of relief that they didn’t publish this holy heap of goddammit. This time.

“We would suggest reaching out to Dr. Brogan directly as she didn’t make those comments on goop’s platform.”

In another fun twist, The Daily Beast also started looking into the validity of “Dr.” Brogan’s numerous certifications, which have now gone missing from her website. So if you want to enjoy that delicious stew, definitely give the full article a read.

As for me, I want to circle back to how Goop is trying to distance itself from Brogan while they try to pretend they’re normally a responsible reservoir of health advice like pouring coffee in your ass and shoving rocks up your pork pontoon. To their credit, yes, Goop is currently promoting responsible advice like social distancing, hand-washing, etc., but it doesn’t take a marketing genius to realize now’s probably not the time to spout conspiracy theories and all-around quackery. (See: Lilly, Evangeline)

That said, Goop has known who Brogan is for a long time and continued to feature her prominently in articles and events despite the fact that she’s argued that HIV doesn’t cause AIDS, which is all a Big Pharma scam anyway. Yup. And now you know that fun little fact because of the always-excellent Dr. Jen Gunter who has been diligently manning the Goop wall for a while. Thanks to a solid tip from Lainey Bobainey, a quick search turned up a goddamn treasure trove of tweets from Gunter that drag Brogan’s various menagerie of JFC, which Goop has blatantly chosen to ignore.

Gwyneth Paltrow to feature doctor who thinks AIDS is a Big Pharma scam at In Goop Health https://t.co/tEhptDCRhC pic.twitter.com/aNXxgF6Vgu

So the @goop expert Dr. Kelly Brogan has an “alternative” idea about insulin, you know, that it kills diabetics pic.twitter.com/DLr0MWaloJ

@chelseahandler so you will be appearing with Kelly Brogan @goop and she believes 9 month abortions are a thing pic.twitter.com/rfd4iuZIff

When @Newweek asked Dr. Brogan doubled down on being an AIDS denialist and her other quack theories https://t.co/Pa0BvnhbeB

So what’s the moral of this story? Don’t take health advice from a site that recommends a pot of Folger’s to the colon. Because take a good look at how well its founder actually follows the pseudoscience she peddles for a quick buck.

← Exhausted Seth Meyers Is All Of Us | Is Either Maggie Or Eddie Leaving 'A Million Little Things' after the Season Two Finale? →