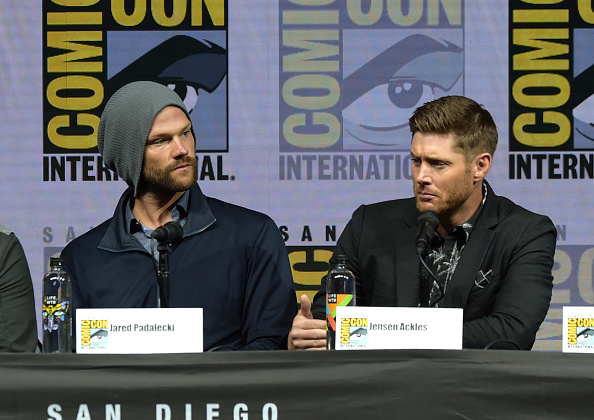 Last week, the CW announced that it had greenlit a Supernatural prequel focused on the parents, John and Mary Winchester. The new project comes from the production company of Jensen and Daneel Ackles, and Jensen himself will be providing the narration for the series, which also obviously has the blessing of Eric Kripke, the creator and original showrunner of Supernatural.

There was just one problem: No one bothered to tell the other Winchester brother, Jared Padalecki. Padalecki was pissed, at one point tweeting (and deleting) at Robbie Thompson — a writer and exec producer on Supernatural who would be showrunning the prequel — “What a truly awful thing you’ve done. Bravo you coward.”

Needless to say, it was a tense time in the Supernatural fan community (and why did Padalecki level all that anger at Thompson when all he could muster was a dude scoff at Ackles?).

The good news is: Things are totally good now!

@JensenAckles and I had a great talk, as we do often, and things are good.
The show is early in the process with miles to go.
We’ve travelled a lot of roads together, and sometimes those damn roads have bumps.
Bumps don’t stop us.
Once brothers, always brothers. #spnfamily

Love you @jarpad …
Miss these talks. I forgot how much face time we always used to get. And I miss that too. I know you’re busy…as am I, but you’re still my brother. I miss you, pal. https://t.co/KtRKYkvc2K

Everyone has kissed and made up! I’m sure that Padalecki no longer harbors any resentment whatsoever about being kept out of the loop on a prequel to a show that he spent nearly his entire adulthood working on! I have no idea what Ackles said to Padalecki to convince him to drop his oversharing grievances, but it must have been good. And clearly, they are still in the early stages because it wouldn’t have taken long at all for Ackles and Thompson to “figure out” what is canon on a 15-season series. I’m sure they pulled that off over a half-hour lunch and a cocktail!

Canon? We got you. Figuring that out has been the fun stuff. https://t.co/inN5KrevKV

Look: The important thing is, they’re friends again, although it’s a little weird that Eric Kripke deleted his tweets pertaining to this issue, but whatever! Everyone loves each other again. Even more importantly, the fans have calmed down, too.

Hey world.
Thank you for the love.
Please PLEASE don’t send any hate or threats.
I care deeply about everybody involved and would be in true misery if any of them were harmed or threatened.

Do yourself a favor and do not go into the mentions of either Ackles or Padalecki. It’s crackers in there! I literally saw a former Trump staffer — and the mother of Jason Miller’s child — getting into it with another Supernatural fan over whether Padalecki acted appropriately in putting his former co-workers on blast.

The point is: Everything’s cool now, and obviously the Padalecki fans would never boycott the series over this 😬.