The CW Greenlit a 'Supernatural' Prequel, And Then It Got Messy

Early last evening, we got word that the CW had ordered a prequel Supernatural series about the Winchester parents called “The Winchesters, which would focus on John and Mary Winchester (played by Jeffrey Dean Morgan and Samantha Smith in Supernatural). Moreover, we learned that the series comes from Chaos Machine Productions, the production company of Jensen Ackles and his wife, Danneel Ackles, and that it would be told from the perspective of Dean, who of course is played by Jensen Ackles. Per Variety, the prequel spin-off is described as the “epic, untold love story of how the Winchester couple met and how they put it all on the line to not only save their love, but the entire world.”

We in the Pajiba Slack spent a good hour last night both drooling over pictures of young Jeffrey Dean Morgan and imagining who might be able to play him, and more or less surmised that finding a Gen Z actor that could pull off young JDM would be next to impossible. I mean, look at the man. Good God:

Soon thereafter, alas, things got ugly when the other Winchester brother from Supernatural, played by Jared Padalecki — weighed in on the announcement. It turns out that Padalecki, who played Sam Winchester for 15 years, found out about the series like the rest of us: From Twitter. Padalecki was not pleased.

Dude. Happy for you.
Wish I heard about this some way other than Twitter.
I’m excited to watch, but bummed that Sam Winchester had no involvement whatsoever. https://t.co/bAcEvFKM7p

And if you are thinking that this is a joke, well, no. No, it is not.

In fact, in a now-deleted tweet, Padalecki also took a shot at Robbie Thompson, an executive producer on Supernatural, who was brought in to write and run the prequel. 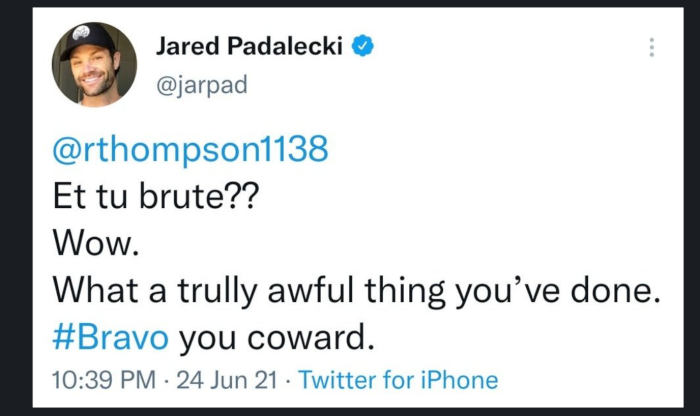 The creator and first showrunner on Supernatural, Eric Kripke — who now runs The Boys, which features Jensen Ackles in its forthcoming third season — jumped on Twitter to post what feels like an attempt to ameliorate the situation.

When @JensenAckles first told me this story, I loved it. He & @DanneelHarris & @rthompson1138 are the perfect people to make it. (The other perfect person is too busy Texas Rangering.) Thanks for carrying the torch, guys, go kick it in the ass. Proud of you. #SPN #SPNFamily https://t.co/56hg9NwdHc

Now look: My love for Jensen Ackles knows no bounds, but even I can recognize that this is bad. It’s not just that Ackles didn’t give Padalecki a heads up about the announcement, this also means that Jensen Ackles and his wife came up with the idea, developed it, got permission from Kripke and the CW, and brought in Robbie Thompson without consulting Padalecki or even mentioning it to him. That is pretty cold for two guys who, by all outward appearances, are best friends and who worked on the series for 15 years.

On the other hand, Twitter is probably not the place to work out one’s personal dramas. Padalecki is doing fine, after all: He jumped immediately from Supernatural to Walker over on the CW, which was quickly renewed for a second season.

In either respect, the very passionate Supernatural fanbase is losing its mind.