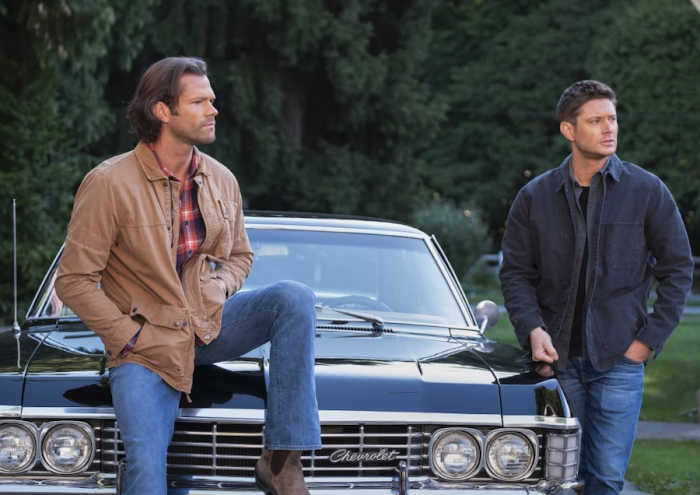 Well folks, it finally happened. After 15 seasons, Supernatural has somehow, almost improbably and in spite of its own inclinations, reached the end of its road. Heading into the finale, it was hard to imagine what shape that conclusion might take. After all, this is not a show that really does endings. Endings are like death, and let’s face it: Death never really sticks on Supernatural. Setting aside the 14 previous season finales that ended in cliffhangers and the countless character deaths and resurrections, even this supposedly “final” season didn’t seem like it was going to quit. Originally slated to wrap up last Spring, production was interrupted by the pandemic and so here we are, in November, watching the last batch of episodes. Add to that the fact that, from a plot perspective, the penultimate episode WAS the finale — Chuck was defeated, Jack is the new God, and the Winchesters boys are finally free from the shackles of destiny to write their own story. There was even a big montage at the end as the boys drove off together! What more could possibly be left in this story?

And that’s where I gotta hand it to them. In its final hour, Supernatural finally learned how to say goodbye — and found its happily ever after in the hereafter.

The finale, bearing the inevitable title of “Carry On,” picks up on the question of “what’s left” by showing what Sam and Dean do with their newfound freedom. First up: They hit a pie festival! And then they get back to the business of saving people and hunting things, starting with a creepy nest of vampires that kidnap children. It seems, for all intents and purposes, to be life as usual for the boys. Stripped of their allies, it’s just Sam and Dean on the road together again, looking for clues in their father’s journal as they save normal people from (for this show) average monsters. This is hardly the sort of threat that should give them pause, and it doesn’t… until Dean is thrown against a barn beam and impaled on a piece of rebar.

Yup: Dean is killed by the same thing that freakin’ Chim survived on 9-1-1!

The fact that Dean dies isn’t shocking. He’s died a lot! He’s died hundreds of times IN A SINGLE EPISODE before! What makes this death different is that he no longer carries the plot armor of being God’s great destiny plaything. Now that he can live a normal life, it’s only right that he can also die a normal, dumb, non-apocalyptic death. That’s what happens to hunters. They die. For fans who perhaps wanted to see Dean grow old together with his brother, or at least see him killed by something BIG, this was probably a huge blow — one that came suspiciously early in the runtime. However, in typical Supernatural form, the death isn’t really the point here (it never is). What matters is that Dean makes Sam accept it. The secret sauce of Supernatural’s longevity was the plot contrivances driven by Sam and Dean’s simple inability to accept each other’s death. It was a repetitious mistake that led to bigger calamities each season. The one thing this show absolutely needed to do in its final hour was the one thing it had never really done before: Show the brothers letting go, which they did in a tearful moment that Jensen Ackles and Jared Padalecki acted the everliving hell out of.

All I wanted out of this finale was some unconvincing old man makeup, and Supernatural delivered in spades as it showed Sam starting a family, being a father, living to a ripe age and finally dying his own normal death, in his bed at home with his son at his side and a head of grey hair. Of course, it doesn’t matter who he married or what he does with his life — what matters is that he lived. Meanwhile, Dean’s driving around Heaven in Baby because what, you didn’t think this show was gonna show us some afterlife? Turns out, Jack (with an assist from Castiel) renovated Heaven into a place where you’re not simply trapped in your own memories — you can find a new happy existence, one shared with your closest loved ones. Or at least that’s the way Bobby tells it when Dean arrives outside the Roadhouse of the mind. If Sam finally got the normal life he’d wanted from the start, then this is also the best ending for Dean in a way: He could finally stop killing, and be reunited with all the people he’s lost along the way.

It’s only a matter of time before Dean finally pulls over and waits for Sam to join him for one last hug, because what matters is that they’re together someplace, even if it’s not on Earth. Perhaps the biggest surprise of this finale is that, after 15 seasons of angels and demons and Hell and Darkness and Death, Supernatural ended with more of a whimper than a bang — and that is also something it’s never done before.

I’ve joked before that this last season was something of an epic victory lap for the series, often delivering fan service at the expense of wrapping up its own plot, and that’s another area where this finale differed. It was unabashedly sentimental and very montage-heavy, but it also set aside what fans might have WANTED to see in favor of doing the right thing for the characters. It let the Winchesters be normal. It may not have been the finest episode of Supernatural, but it was a perfect ending for the show itself. In lieu of fan service, it offered up a coda where Jensen and Jared thanked the audience directly, as the camera pulled back to reveal the entire crew waving goodbye — the ultimate fourth wall break for the show that never could resist an excuse to go meta.

If I have any regrets, it’s probably that Crowley didn’t make a return appearance — and I’ll miss following the continued adventures of the Supernatural Tape Ball on Instagram:

← Break Out Your BIM Marks, 'The Apple' Is Turning 40! | Sunday Morning Political Briefs: This Is Who They Are →