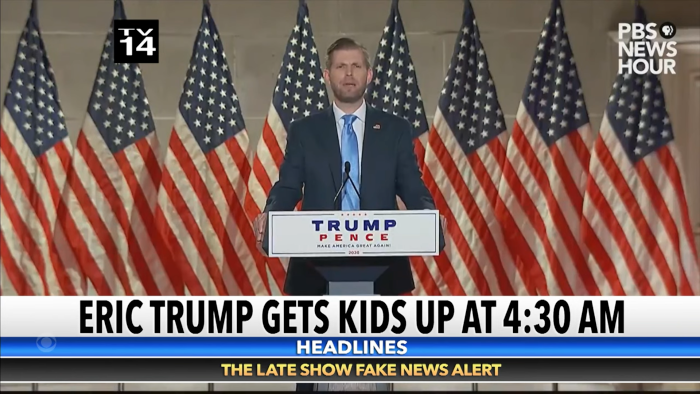 I have two twenty-month-old children. They get up at seven every morning and go to sleep between 6:30 and 7:30 PM (depending on how their nap went). This did not happen by chance. My wife and I sleep-trained our kids. We are beholden to a schedule that doesn’t allow for a lot of deviating. We don’t get to go out much or travel easily. However, we sleep, and they sleep, so it’s worth it. Eric Trump could have used the same program.

The most recent episode of The Late Show with Stephen Colbert kicked off with an interview with Eric. In it, he claimed that he woke his children up every morning at 4:30 AM to say the pledge of allegiance, and he calls them every night at 7:45 to ask what they are thankful for. Colbert’s Crew then recommends Toddler Coffee and Baby Meth for his kids to deal with it. Both sound better than what those poor kids are going through.

Let’s say that his kids go to bed at 8 PM every night after their father has called them from the parking lot of Mar-a-Lago, where he’s Valeting everyone’s cars. That already seems too late for little kids (and that’s from someone who was given free rein as a child). It is definitely too late if they’re having to get up at 4:30 while their father, who likely just got home, screams the pledge of allegiance at them.

Part of me believes that these were both on-the-spot exaggerations by Eric. He’s trying to look good for OAN, so he lies. A bigger part of me believes that Don Jr. once told a coked-up lie and made Eric believe that true patriots jostle their children awake every morning by forcing them to swear fealty to their red, white, and blue overlords. Then Don Jr. had a good laugh and assumed his brother would never follow through on something so ridiculous. But we all know better.