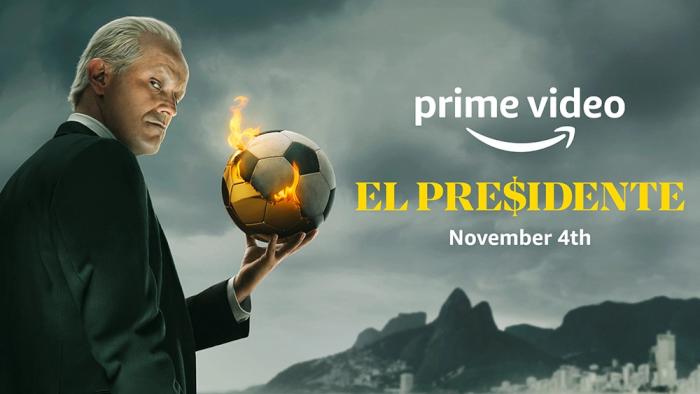 Anti-Qatar 2022: 'El Presidente: Corruption Game' Is an Outstanding Crime Biopic About How Football Became the Lifeblood of Capitalism

This is the fifth entry on a series of football-themed articles I’ll be writing about this abomination of a FIFA World Cup. Previous articles here and here, here and here

Looked at from a certain, very biased angle, the story of one João Havelando could be read as that of a man larger than life, a transformational figure with a complicated legacy, as the balance scales of his achievements vs. wrongdoings are still oscillating: Born in Rio de Janeiro to a wealthy family of Belgian-descent, he was tall, patrician-looking and athletic, predestined to reign at the upper echelons of South America’s white elites. But instead of following his father’s career as a businessman or continuing his career as a lawyer, he embraced his love of sports and leveraged his connections and his legacy as an Olympic swimmer (in… Berlin 1936) in order to become the president of the Brazilian Sports Confederation (CBD) from 1958 to 1973. That position put him in charge of Brazil’s Football Association and its national squad, so basically he became Brazil’s Metropolitan Archbishop.

During his tenure, which coincided with the arrival of a certain Edson Arantes do Nascimento, Brazil would win two World Cups (Chile 1962 and Mexico 1970), consolidating the country as the heart of Global Football. Later on, he would rally the votes of African and Latin American countries in order to oust the racist and outdated executive board of FIFA, installing himself as its President from 1974 to 1998. Throughout his tenure, FIFA became one of the first global organizations to publicly take action against Apartheid, Football consolidated itself as the Global Religion and key economic sector that it is today, as he promoted its expansion through the development of football schools in underdeveloped countries, consolidated the business of transmission rights and established key, mutually beneficial partnerships between FIFA, local football associations and business conglomerates. He died at age 100 in 2016, with some accusations of corruption here and there, but still, his role in shaping football into what it is today is undeniable.

And that’s the thing when you say that last sentence: It is absolutely true, because Havelange was responsible, like no other person before, in deepening the institutional rot at the heart of FIFA. Havelange might be the man who set the blueprint for the kind of corruption that makes FIFA work. He made FIFA too big to fail and he entangled it deep within the heart of consummerist society, handing over the game to the rules of casino capitalism.

El Presidente: Corruption Game, which we might consider the second season to El Presidente (focused on Segio Jadue’s career), is whatever the opposite is of a sophomore slump. The scope is larger, covering the career of Havelange from 1966 to 1982, with mood-setting flashbacks and flashforwards. The production values are on a whole other level compared to its first season (which looked pretty great already), but also the characters are grander. Writer-director Armando Bó has even more fun playing fast and loose with the facts than in the first season, as there is nothing about how he narrates the story of Havelange that, in the Latin American context, might be hard to believe.

Havelange is played by Albano Jerónimo (Vikings), who makes use of his imposing physicality as the thread that weaves together all the characters that Havelange played in order to climb the ladder: A sinister power broker, taciturn and aloof family man, a snake-charmer pretending to be the Big White Ally, while at the same time being a purring kitten with whatever fascist Argentinian or Brazilian dictator currently in power (in a funny casting choice, the same actor (Nelson Freitas) portrays three consecutive Brazilian autocrats). Novela star Maria Fernanda Cândido plays Anna Maria, Havelange’s put-upon wife, whose entire arc is completely and gleefully fictionalized, as the couple engages in mutual affairs as she tries to break away from him. Apparently, little is known about the real-life Anna Maria Havelange, so her character is there to represent the condition of so many Brazilian and South American women in the 70s: Tied up to their husband’s life, but also close enough to be influenced by the Women’s Movement. Cândido is so adept in the role that she manages to perfect a character that in the script, probably, was underwritten. Rounding up the top billing is Eduardo Moscovis as Castor de Andrade, a legendary Carioca* criminal underboss and ally of Havelange, who of course eventually becomes his nemesis.

The key ingredient, once again, is the narrator. This time, the role falls into none other than Sergio Jadue, once again played by Andrés Parra. This makes for a hilarious contrast in having a member of FIFA’s glorified crew telling the story of its emperor. The series makes full use of the slimy and obnoxious Jadue created by Parra to take the piss out of the Hassler family (owners of Adidas), FIFA’s European officials (just as corrupt, but with less business imagination) and the cynical ways certain Third World leaders coopt anti-colonialist discourse in order to push their own agenda … while flooding Africa’s civil wars with weapons. Did I mention the Havelange family made its wealth in the weapons “trade”?

The series metanarrative does fall apart a little bit in the end, compared with the hilarious rug-pulling in the first season. However, it succeeds in shifting tones when appropriate, particularly in the episode dedicated to the 1978 World Cup, where FIFA and Havelange perfected their kowtowing to fascist dictatorships.

In theory, you can watch this season without having seen the first, but I’d recommend bingeing both this weekend, whether in anticipation or in avoidance of the World Cup final. They both complement each other in portraying the specific ways in which football’s corruption is just neoliberal capitalism permeating it: This is the story of how the Beautiful Game was coopted as the blood pumping through the organs of global capitalism. After all, what would Coca-Cola and Adidas be without Football?

*Denonym for a native of Rio

But enough of FIFA criticism. In true BBC fallacy fashion, it’s only fair I write about something supported by FIFA. Next up, I’ll subject myself to the mythical film commissioned by FIFA to tell their history they wanted to: United Passions.


← Twitter Users Ponder the Films That Would Be Best to Muppetize | 'Something from Tiffany's' and Zoey Deutch, the Kate Hudson of the Streaming Era →