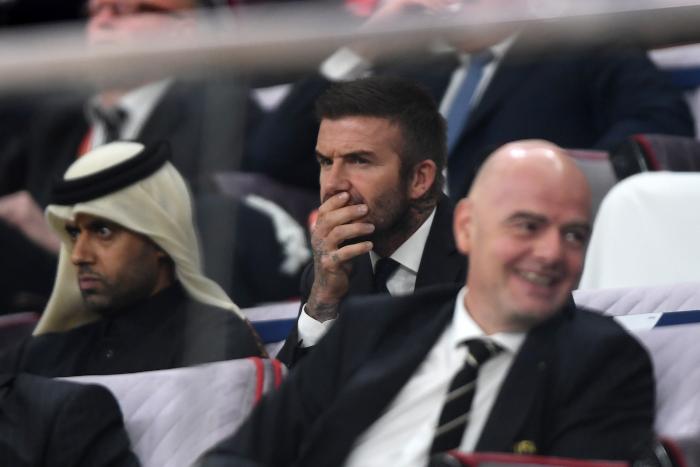 This is a second entry on a series of football-themed articles I’ll be writing about this abomination of a FIFA World Cup. Previous article here.

Last time I railed against FIFA’s tradition of bowing down to autocratic regimes, and in particular, against the pseudo-country of Qatar itself for attempting to build a national myth on the backs of cruelty and exploitation. But Qatar would’ve enslaved people from poorer countries in any scenario, and FIFA would’ve been corrupted in any scenario. The question we don’t ask ourselves is who, ultimately, allows for disgraces such as Qatar 2022 to take place. The answer is obvious: It’s us, the Audience; it’s them, the players and local football organizations; and it’s the owners of the Capital. Three key groups could actually hold the keys to power over FIFA, but in an act of coordinated cowardice, they have decided not to act.

I don’t follow football regularly, but the World Cup is the World Cup. I will not be watching any of the matches, but I am engaged: I’m still checking the results, I have my favorites, and I have my foes. I am really happy that Morocco defeated Spain. I rooting against Brazil, as I’m partly Argentinian, but mostly because I hate Neymar with a rational passion. I’m rooting for France and for Kylian Mbappé’s steady path into GOAT contention. I’m rooting against England mostly because it’s funny. But more importantly, I’m rooting for Argentina and Messi to finally win a cup in this generation, mostly thinking of how happy this would make my Argentinian cousins and niblings. If Argentina happens to flub it once again … well, welcome to being a South American kid! Please make sure you leave your dreams of Great Things at Customs; you are not allowed to bring them into the Continent.

But things could’ve been different. Whether you are a casual, agnostic fan like me or football-religious like 80% of the world, we had at least a decade since Sepp Blatter announced that this monstrosity would take place, twelve years of outrage, twelve years of awareness of workers’ deaths, of Arab Springs, of Qatar nearly getting invaded and still, twelve years of coordinated police investigations into FIFA’s corruption, and still, nothing happened. The Qatari authorities and FIFA, post-totalitarian versions of the banality of evil, somehow succeeded in making the event an inevitability, an induced path by simply appealing to our apathy and cowardice.

The first, and the most impactful act of cowardice came from the corporations. Globalized neoliberalism and football are intrinsically related, the former sometimes relying heavily on the latter. This would make the very expectation of FIFA’s sponsors putting their foot down an almost offensively stupid naïveté. But the thing is, while the corporate sponsor are not going to change the system they depend on, they do have influence over decisions within that system, in particular, the decisions that could actually improve their image. They had nothing, absolutely NOTHING to lose by forcing FIFA to drop Qatar as hosts. It would’ve been exactly the kind of low-stakes, performative act of social responsibility corporations love to do. Maybe LVHM or Mercedes-Benz would see a boycott and minor loss of revenue coming from Qatari nationals, maybe PUMA and Adidas would a couple thousand less sneakers there. A loss that would be recouped tenfold by the PR coup that would’ve been: Ammending an act of grotesque corruption. After that, they could’ve chosen any other normally corrupt and normally undemocratic country to host the World Cup, like China, Turkey, or the US.

The second most strategic act of cowardice came from the players themselves and their national football organizations. Especially those from Western Europe. If the proud activists of the Danish or Australian squads had actually boycotted the games, that alone would be a PR crisis for FIFA. If the Netherlands squad had done more than just wear a protest t-shirt last year, that would’ve been a PR disaster. If Germany or France had dropped out, that would’ve been it, a death knell for Qatar 2022. They already have their generational World Cups, what was FIFA going to do? Sanction them?.

Even more pathetic were the puny attempts by the players at virtue-signaling. The captains of seven European squads were planning to wear rainbow-colored armbands in support of LGTBQI+ rights. But after being threatened by FIFA with a yellow card (for the US: two yellow cards in each phase of the tournament equal a ban in the next game), the captains relented. “They couldn’t sacrifice success on the field”, again, cowardice, apathy, and selfishness prevailed, when they could’ve gone into history with heroic malicious compliance: One captain steps down, his deputies take on the armband until there’s no one left. At least the players of Latin American, African or Asian squads have the excuse of needing to be in the World Cup to put themselves on the map. What is the European player’s excuse?

But the stalwart example of this cowardice is David Beckham, who spat on the face of his status as Gay-rights supporter and icon of a better masculinty to whitewash Qatar’s image to the world. At least he wasn’t a cheap sellout, apparently earning 150 million quid for the endorsement deal. Who wouldn’t take that deal, when all you have to do is parrot offensively empty platitudes about dreams and the spirit of the game? Who cares if it makes my career as a humanitarian even more overrated than my career as a footballer? Were we expecting Beckham to demand standards for a country when doesn’t even demand them from his good-for-nothing adult sons?

Was that a low blow? Yeah, but Beckham deserves it. Beckham deserves it because he is the embodiment of everything wrong with footballers today. Because he’s precisely what FIFA expects from their star players: attractive faces that do nothing, say nothing but are perfect for optics, such as being an UNICEF ambassador. Meanwhile, they rack up hundreds of millions a year for everyone involved. If you rack up tens of millions or single figures, you might be free to do some activism. A game filled with Alexis Sánchez and Arturo Vidales instead of Johan Cryuffs or Charles Mariano Aránguiz. Beckham provided the roadmap for the kind of players that are, currently, forgoing any meaningful action against this World Cup.

The third act of cowardice, the hardest one to change, is the one we are all collectively doing by being an ever-reliable, uncritical audience. For decades, we have refused to turn the screws on the owners of teams, on the sponsors, and on FIFA’s bureaucrats. We have been apathetic about the one thing that should have our full engagement: Our religion (football, of course). We have completely failed to appreciate the political power that a boycott can have: All you need to do is not buy, not engage, not watch and you can break havoc, effective power. It’s not like we could organize a fandom of 3 billion acolytes, but I don’t think we could’ve gotten even the most engaged, left-leaning youths in Europe and the Americas to boycott this Cup. It would’ve demanded hundreds of local-level, small actions on a semi-coordinated basis. After all, one of the most consequential boycotts in History started with only a local bus company in Alabama. But football and FIFA have the ultimate ace to quell discontent: A machine that produces emotions and joy, a religion with its own rites. And as any progressive Catholic might tell you, there’s nothing harder than reforming a centralized religion.