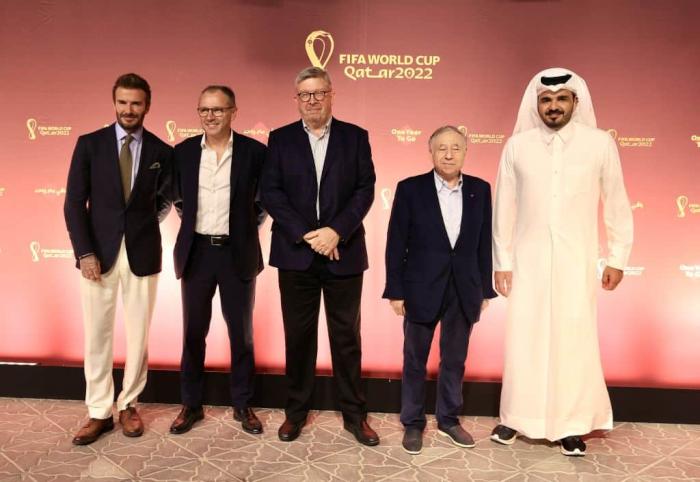 The 2022 Qatar World Cup is about to kick off, and it’s clear that the entire thing will be a sh*tshow. Questions over potential bribery and corruption of FIFA members in the awarding of the event to the country have plagued the sport for years. The event is happening over the Winter rather than the Summer, thus disrupting the entire season for teams worldwide, because it turns out that Qatar is too hot in July for players to kick around a ball and not die of heatstroke. Reports of human rights violations have filled newspapers for a long time now, after many workers alleged vile abuse and exploitation of migrants in the building of various stadiums. A February 2021 report from The Guardian estimated a death toll of 6500 migrant workers since the World Cup was awarded to Qatar. Many local teams and fans have called for a boycott of the event.

Some of the biggest protests have come over Qatar’s homophobic laws, which criminalize homosexuality, with offenders facing fines and up to seven years imprisonment. When asked about this and how it would impact fans and locals in the country during the World Cup, former FIFA President Sepp Blatter initially said, ‘I would say they should refrain from any sexual activities.’ I assume he made this important point while holding a giant cloth bag with a euro on the side of it.

These dangerous policies, coupled with Qatar’s abuses of workers and questions over labor-related deaths pertaining to the World Cup, have exposed the willing ignorance of many. Major networks are still covering the event. Some are trying to claim that the World Cup can bring acceptance to the country. One of the people making this t-shirt slogan claim is David Beckham, one of the most famous footballers on the planet and a man with a multi-million-dollar deal with Qatar. Here he is advertising the country as a jolly place for a holiday (the YouTube comments are, coincidentally, turned off.)

Many LGBTQ+ groups have called out Beckham’s willingness to take the money and stick his head in the sand over everything else. Now joining that crowd is Joe Lycett, the British comedian well-known for his political stunts. He’s issuing Beckham a challenge: if he doesn’t give up his Qatar deal, Lycett will shred £10,000 of his own money.

As Lycett notes, Beckham, something of a gay icon in the UK to many, was ‘the first premiership footballer to do shoots with gay magazines like Attitude, to speak openly about your gay fans, and you married a Spice Girl which is the gayest thing a human being can do.’

His ultimatum is a showy one, but with purpose:

‘You have always talked about the power of football as a force for good. Which suggests to me you have never seen West Brom. But generally I agree - so with that in mind I’m giving you a choice. If you end your relationship with Qatar I will donate ten grand of my own money (that’s a grand for every million you’re reportedly getting) to charities that support queer people in football.

However, if you do not I will throw the money into a shredder at midday next Sunday, just before the opening ceremony of the World Cup and stream it right here. Not just the money, but also your status as gay icon will be shredded.

Also you’ll be forcing me to commit what might be a crime. Although even then, I reckon I’ll get off more lightly than I would if I got caught whacking off a lad in Doha.

The choice is yours. I look forward to hearing from you.’

Stuff like this isn’t new to Lycett. He briefly changed his name by deed poll to Hugo Boss as part of a protest against the fashion brand’s habit of suing small businesses for using the word ‘Boss’ in their name. On a recent and deeply funny appearance on Laura Kuenssberg’s program, he drolly tore Liz Truss and the entire smiley-time political talk show concept to shreds. He’s arguably the most famous pansexual person in the UK, and he’s all too happy to get weird for the right cause.

I do have mixed feelings on this particular stunt, if only because being able to destroy £10k of your own money during a cost-of-living crisis makes me want to scream. Given that this is Lycett, I imagine he’ll have something else up his sleeve rather than mindless destruction. But it also draws attention to the sheer cash-driven callousness of this topic. A lot of people are happy to take the money and adhere to astonishing violations of human rights. FIFA did it. So have tons of sponsors and broadcasting platforms, all while they cloaked themselves in rainbow flags during Pride. David Beckham is a stupidly rich man. What is $10 million to him? Does he truly believe that he can be some sort of messianic guide to a new progressive era in Qatar of was the prospect of another mansion just too juicy to ignore?


← Why Was Everyone Cool with Dave Chappelle's 'SNL' Monologue? | Who Lives, Who Dies, Who Tells 'The Walking Dead' Finale Story? →