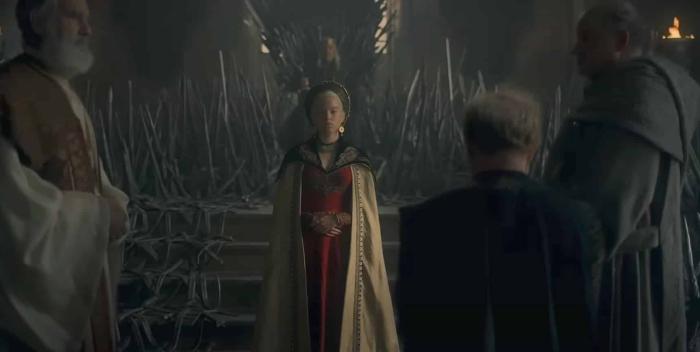 Did 'Game of Thrones' Already Spoil 'House of the Dragon'?

We are one episode into House of the Dragon and so far I think they need to ease up on the pacing. That first episode definitely had enough plot for two episodes to let people get acquainted with a new set of people who have startingly similar appearances. If you thought keeping all the dudes with brown hair and beards straight on Game of Thrones was tricky, look out because House of the Dragon is just putting half the cast in the same bad white wig! Bonus: All their names sound basically the same too.

(Spoilers follow for the first episode of House of the Dragon and the end of the Game of Thrones television series.) (And possibly the A Song of Ice and Fire books, who knows, right?)

At the end of that first episode, we saw King Viserys make the decision to name his daughter Rhaenyra his heir and have all the lords of Westeros swear fealty to her. We also saw the set-aside former heir, Daemon, get on his dragon with his close personal friend Mysaria. All this after we learned that Viserys himself became heir only after he was selected by a council who chose between him and his cousin, Rhaenys. Rhaenys would have been the first woman to rule Westeros, and is now known as “The Queen Who Never Was.” The Westerosi aren’t great at snappy nicknames.

However, it also all sounds pretty familiar to Game of Thrones viewers. Much ado was made about whether Daenerys could claim the Iron Throne because no woman had ever ruled Westeros. As inspiring as that scene of Rhaenyra taking the oaths of loyalty from the lords of Westeros was, we know that she will not rule. If she had, we wouldn’t have listened to a bunch of people sternly intoning that a woman had never sat on the Iron Throne before Cersei took it for herself after Tommen’s death. Is that a spoiler? If so, it’s the least concealed one ever. Does knowing that ruin the enjoyment to be had in watching the show? I don’t think so, there’s still a story to be told, and given the history of the Targaryens, we’ve seen in Game of Thrones we knew it wouldn’t be a happy one. I assume the show will lean into the pathos in Rhaenyra’s story, making the fact of the outcome a feature rather than a spoiler.

← Twitter Users Share Their Fondest Memories of the Internet in the Nineties | After 25 Years, the Cast of 'Rodgers and Hammerstein's Cinderella' Still Loves the Movie as Much as We Do →