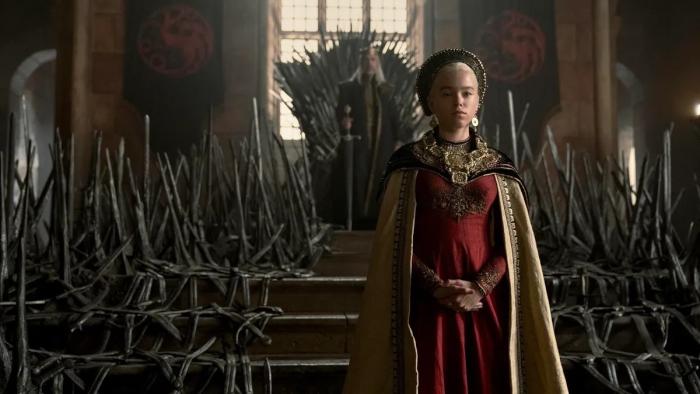 In 'House of The Dragon,' the Iron Throne is Sharp as Ever

(spoilers for episode one, season one)

It’s been three years since the final season of Game of Thrones concluded, and despite the, let’s just say, strong feelings felt by many viewers in its wake, a reported 10 million individuals (via THR) were willing to return to the Seven Kingdoms for the long-anticipated prequel series, House of the Dragon, based on the George R.R. Martin fictional historical account, Fire & Blood. Set 172 years before the events in Game of Thrones, HBO’s latest fantasy entry follows House Targaryen at the peak of their rule and, presumably, provides insight into their distant fall.

One hundred years into their reign, begun by Aegon the Conqueror who, as the name suggests, conquered most of the Seven Kingdoms, and his grandson, King Jaehaerys (Michael Carter) comfortably rules the throne. But as Jaehaerys enters his old age without an heir apparent, it seems prudent to declare one in order to maintain the peace that has reigned for so long. Before the Great Council at Harrenhal, still in partial ruin from Aegon’s initial siege a century earlier, the matter of succession was debated, though only two options were truly considered: Jaehaerys’ granddaughter Princess Rhaenys Targaryen (Eve Best) or his grandson, Prince Viserys Targaryen (Paddy Considine). Though Rhaenys is the older of the two, she’s passed over in favor of a male ruler.

A mere decade later and a king must yet again fret over who next will sit on the throne. Despite Viserys’ wife, Queen Aemma’s (Sian Brooke), many attempts to give her husband children, only one has survived, the independent, dragon-riding Princess Rhaenyra (Milly Alcock). Now towards the end of her seventh pregnancy, Viserys is so pleased by the arrival of what he is sure to be his long-awaited male heir that he organizes a grand tournament, as though it isn’t an inauspicious display of putting the cart before the horse. I’m sure it shocked exactly no one when things go wrong during labor, though few could anticipate just how brutal it would get. As expected the (needlessly protracted) Cesarean results in Aemma’s death from blood loss, though the baby boy—Viserys’ prediction comes true after all—only lives for a few hours, making her unwilling sacrifice even more tragic.

Interspersed throughout the torturous labor are the various jousts and skirmishes occurring at the tournament, which serves as a convenient means of introducing even more characters from houses GoT viewers will quickly recognize, as well as an opportunity to display more violence on top of an already bloody series premiere (pretty sure they blew through their colored corn syrup and prop severed limbs budget in this episode alone). But after watching City Watch Commander Daemon Targaryen (Matt Smith) lead his men in a gruesome maiming spree under the guise of law enforcement, what’s an ax to the face? Though he’s a rapscallion, Daemon knows he’s shielded from any real consequence on account of him being Viserys’ brother.

However, once Aemma and baby Baelon are dead, it appears Daemon is now also the heir apparent based on established precedent. Rhaenyra, already at a slight emotional distance due to her father’s open longing for a boy (though the two do have a loving relationship), is understandably heartbroken over the loss of her mother. Forced to be the one to give the command to burn the remains of her mother and brother, it’s clear that Rhaenyra’s childhood has come to an end. Things only go more sideways when Daemon, already a controversial option for successor among both the court and Viserys’ council, proceeds to treat his men to a raucous party at the brothel he frequents—true story: the subtitle for this recap was very nearly “Bangin’ & Maimin’”— gives a speech that’s not only boastful over his status as heir to the throne but also refers to his deceased nephew as “The Heir For a Day,” a play on the cruel nickname bestowed on Rhaenys (“The Queen Who Never Was”).

Brother or not, this is a bridge too far for the grief-stricken Viserys. He strips Daemon of his status as heir apparent and commands him to return home to the Vale and the wife he wants little to do with. With Daemon gone, Viserys informs Rhaenyra that against all odds, she will now be his successor. Although the various lords of the realm pledge fealty to the princess in a formal ceremony, it’s certain that over the course of the coming seasons we’re bound to see a spirited and bloody struggle for the throne.

While I didn’t find this premiere to be as gripping as that of its predecessor, I’m definitely intrigued by the many directions the show could potentially head in. An endless number of seeds have already been planted throughout the hour. Rhaenys and her ambitious husband, Corlys Velaryon (Steve Toussaint), are sure to be an issue, though the fealty of his fellow council members should also be called into question—for being such an “honorable man,” Hand of the King Otto Hightower’s (Rhys Ifans) eagerness to send his young daughter, Alicent (Emily Carey) to Viserys’ bedchambers to ‘comfort’ him is grimace-worthy. Daemon will undoubtedly cast a long shadow over the struggle for succession, though the lengths he’s willing to go to are up in the air, especially since one of the few people he seems to genuinely care about is his niece (perhaps too much?). His anger against his brother is undeniable, though whether or not that will inspire anything as far as murder is entirely unclear. But judging by the brief glimpse of that sore on Viserys’ back, the king’s downfall may well not come in human form.

House of the Dragon airs Sunday nights on HBO and HBO Max.

Kaleena Rivera is the TV Editor for Pajiba. When she isn’t staring askance at some of the wigs happening here (there are so many talented wig specialists out there, get it together, Hollywood), she can be found on Twitter here.