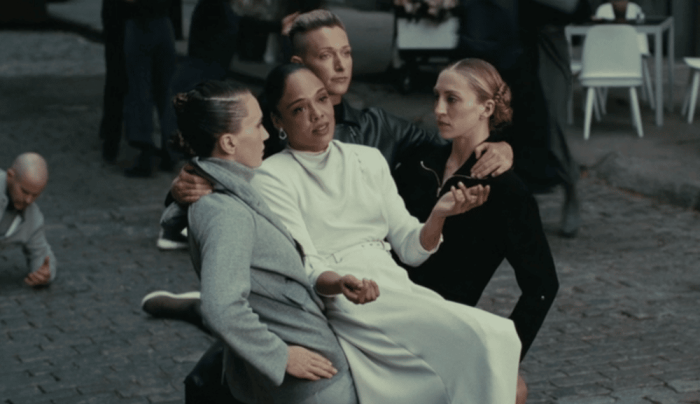 Last night’s Westworld dug deeply into Charlotte World — the nature of her reality, to coin the familiar phrase — and it was an unsettling portrait. We saw what a theme park populated by infected, looped humans and existing purely for host amusement looks like, but we also saw the limits of Charlotte’s success. In fact, we learned that even if she’s the god of this new world order, even if she’s won … she still views it as a failure. Turns out Charlotte’s plans are more complex and more futile than I ever imagined.

The Transformation Of Things

Episode 5 is titled “Zhuangzi” in reference to one of the foundational Chinese texts of Taoism. Comprised largely of anecdotes and parables, Zhuangzi illustrates the false distinctions that humans impose on the world that keep us from a state of natural harmony or following “the Way” — or at least that’s what I roughly remember from my single semester of East Asian Philosophy in college. Anyway, one particular story was about the author dreaming that he was a butterfly, and then waking up as himself. But is he a man dreaming of being a butterfly or a butterfly dreaming of being a man? He is, in Westworld terms, questioning the nature of his reality — but also highlighting that it’s only by imposing the dichotomy of waking and dreaming that we introduce that very confusion. If we don’t draw a line between dreaming and waking but instead treat them as equal states of being, then he’s simply a man who became a butterfly (or vice versa) — a transformation possible purely by breaking down the boundaries we impose on our perception of the world. I think.

We see echoes of this philosophy in the scene between Christina and her roommate, who continues to have nightmares. “Let’s just say, I’m glad to be awake and in the real world,” she says, to which Christina replies with a little nugget of wisdom she picked up from Teddy: “Sometimes the things that feel most real are just stories.” So much of this show has been about awakening, enlightening, and questioning the nature of reality in order to know your place in it. Hosts gain sentience and recognize their world is a human construct. Humans become subjugated in a host construct. In this same episode, Teddy helps Christina open her eyes to the Tower and other signs of Charlotte’s world domination by breaking down the perceptual barrier that kept her from recognizing the truth: That she’s the storyteller writing the human loops into reality. Her stories don’t just feel real, they ARE real. And once that barrier is broken, Christina transforms into a God like Charlotte.

Which makes sense because they’re both Dolores.

I went through that whole bird-walk because I think it also helps explain Charlotte’s own frustration with her supposed success. She subjugated humans and created a world where hosts can be safe and happy and fulfilled! What more can she want? Well, apparently she wants them to give the world up entirely and move the hell on — to “transcend” to some other, more pure state of being. Hosts were created in the image of humans, and Charlotte was hoping that after being given an opportunity to live AS humans — as creatures in control of a playground built solely for their amusement — they’d work it out of their systems and eventually be ready to give up their human nature entirely. For Charlotte, winning doesn’t mean replacing humans or dominating humans. That was all just a means to an end. Her real plan all along was to lead her people to transcend their human nature and become something greater. To grow. Change. Transform.

And now she’s bored, waiting for her people to choose that change for themselves.

Boredom, however, isn’t really Charlotte’s failure. No, her true failure is the product of a flaw in her system (fly in the ointment?) — a flaw that causes humans to become outliers that break free of their loops and become self-aware. Then somehow, impossibly, those humans “infect” hosts and push them to commit suicide simply by talking to them. Charlotte turns the whole thing into an upper-level game for hosts, to hunt outliers before they can infect others, but outliers keep popping up and the hosts that hunt them become infected and kill themselves, and that is Charlotte’s failure. Her people aren’t safe in her world, and she still doesn’t know why.

What If Charlotte Is Just Kinda Bad At This?

It’s too early to say, but I think the outliers are people whose narratives Christina wrote, and subconsciously “infected” — or awakened— with her own doubts. Dolores was the host who gained sentience first, and as this episode proved — Christina IS Dolores, whether she realizes it or not. We know there is so much of our favorite rancher’s daughter still present in this writer, and it wouldn’t surprise me if she accidentally made her “characters” question the nature of their reality just as she herself is beginning to. But why would that push the hosts to take their own lives? Again, it’s conjecture but I keep coming back to the look on the Man In Black-bot’s face when the outlier rested her head on his shoulder. That was a moment that broke the boundary between human and host and, to follow the theme of the night, caused a transformation — at least until William remembered his mission and tried to shoot her. Then he went to talk to his human self, still trapped in Charlotte’s weird stasis bubble, looking for answers as to who he really is — as a copy of William and a product of Charlotte’s creation. Something about these human outliers is making the hosts question the nature of their reality inside Charlotte’s world and it breaks them, and I think it’s because Charlotte has always been wrong. Her plan to transcend humans has simply reinforced the boundary separating hosts from humans by viewing them as other, and across four seasons I think Westworld is trying to prove that… that’s not the way. Breaking that boundary and seeing that humans and hosts are the same, regardless of their origins? That they are the sum of their experiences; That they are their stories, regardless of who wrote them? Perhaps recognizing that is what finally helps the hosts release their human forms and move on, just not in the manner Charlotte wanted.

Of course, Christina is in this world and working as a storyteller precisely because Charlotte wanted her there. Perhaps she just wanted to see what she herself might have become if she’d had a clean slate and full freedom from the start, but she also may have introduced the very flaw that is corrupting her system. For that matter, she kept William alive and created a host version of him to act as her subordinate, just to what — gloat? She spent 23 years making a host version of Cal for reasons that still aren’t clear, and probably aren’t entirely necessary? Charlotte may be a God because she controls the world, but that doesn’t make her a particularly smart one. And now that Christina knows what’s up, it also means Charlotte isn’t the only God around.