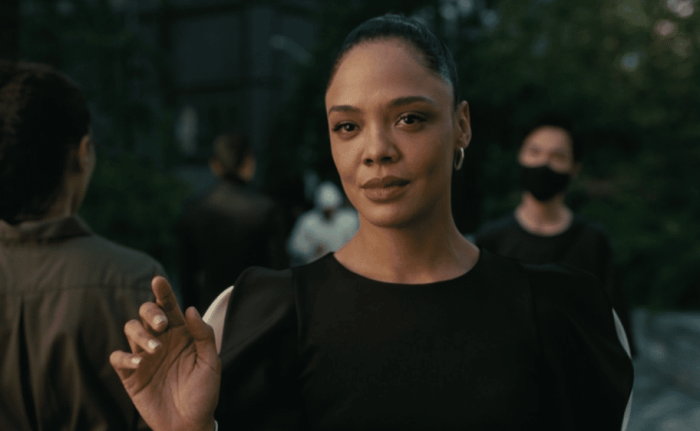 'Westworld' Recap: Is Being Trapped In A Tessa Thompson-Themed Theme Park Supposed To Be A Bad Thing?

We’ve crossed the midpoint of Season Four, and Westworld has finally revealed its hand: This season is all about how being trapped in a Tessa Thompson-themed theme park is supposed to be a bad thing and not just the HBO equivalent of threatening me with a good time. AHEM. Anyway, Episode four — titled “Generation Loss”— clarified many of the big questions we’ve been circling so far this season, in a satisfying, somewhat jumbled fashion. Turns out Caleb was not a robot, but now he IS a robot! Turns out the time-jump was 7 years, AND ALSO 30 years! Aurora Perrineau is totally playing Cal’s daughter, all grown up! Maeve is the weapon in the desert! James Marsden’s still got it! Mostly, though, the episode finally revealed the stakes at play this season, and what “saving the world” will mean moving forward. This isn’t a race against the clock to stop Charlotte/MadDolores from taking over the world, because she already has. She won. She controls humanity, thanks to her parasite-spreading flies and her radio waves. She has turned the entire world into a theme park, Charlotte World, where the humans are the hosts (literally, they “host” the parasite). Every season, Westworld has explored a different variation of the quest for freedom, and now it’s coming full circle — only this time, humans are the ones that need to be freed from their programmed loops.

So yes, we got a lot of answers last night… but I’ve still got some questions for this show. Questions like:

Why Is Caleb So Special?

We know why Dolores chose Cal in season three: because he could make tough decisions for himself. He was the outlier, the fly in the ointment. But if we can trust the flashback we saw this episode as being real and not just a part of Charlotte’s simulation, then Caleb more or less successfully discharged his duty when he and Maeve blew up the last Rehoboam node. The reason this flashback mattered was that the show has been teasing that Cal was horribly injured during that adventure, and it was the root of the speculation as to whether he was turned into a host. He wasn’t! At least, not then. Maeve got him to a hospital, he survived, she left him to live his life and enjoy his freedom… and then seven years went by. This brings us to the initial time-jump: When Maeve accidentally alerted Delos to her location (and Caleb’s) by using her Mechanical Scarlet Witch powers to check in on him through, like, telephone wires or whatever. She leaves her cabin to save Cal, then together they start investigating Delos and discover the plot to replace politicians with hosts and the resurrected theme parks. That brings us up to the confrontation we saw last night, as Cal struggles against the parasite’s control while he and Maeve attempt to kidnap Charlotte and flee Gangster World. They wind up at a construction site on the outskirts of the park, where Maeve and Man In Black-bot are buried by a demolition explosion and Caleb … gets murdered by Charlotte’s men, apparently. Because all of this is an elaborate fidelity test to see if this 278th version of Host Caleb is accurate. Charlotte has spent 23 years and 278 trials trying perfect a Cal-bot, and like… why? Why is he special? Is it just for her amusement, taking good-Dolores’s chosen human and making him a host? Does he have some information or power that she needs under her control after all this time?

We may know the extent of Charlotte’s victory, now, but I still think we’re missing some important parts of her plan.

Is This The Last Time Jump?

Chalk this up to another example of Westworld taking a straightforward narrative and telling it all out of order to keep us on our toes. Right now, we’ve got Caleb dying seven years after the end of season three, and finding out he died 23 years after that — which means the show’s “present” is really 30 years after season three. That’s the generation loss of the episode’s title. It took a full generation for Charlotte to spread her parasite over the world, and for the children who took to the infection more easily to grow into adults. If we’re splitting hairs, I suppose we could say that the season thus far hasn’t really been operating across multiple timelines — it’s just that the Cal/Maeve stuff was a simulation of the past occurring in the present. That doesn’t explain the stuff that happened outside of Cal’s POV, like William buying the Hoover Dam, and really — if the simulation of the past is accurate, it still basically just the past.

Can we trust that Bernard and Stubbs are in the desert at the same time Cal is coming to awareness in the Olympiad office? I think so — after all, Aurora Perrineau’s “C” looks like Frankie in her late 20s. So let’s say that right now, all the characters are finally operating in the same “30 years future” present, a.k.a. Charlotte World. They have to be, for there to be any conflict! And yes, I’m pretty sure Christina is in Charlotte World too.

Seriously WHAT IS UP WITH CHRISTINA?

Across four episodes, Christina’s storyline has been kept frustratingly siloed from the rest of the narrative. At first, I wondered if it was because she’s in a simulation, or in the Sublime — and given the return of Marsden as Teddy Flood, that could still be the case. But after last night, I’m more convinced that Christina is right there in the future NYC of Charlotte World, and that her storyline is actually more straightforward than it seems.

Two things have me convinced: The Tower, and her loops. The Tower is obvious, because Christina has been researching it and, thanks to Cal’s storyline in the past, we know its significance: It transmits the signal that controls the parasites in humans. The dead guy, Peter, basically told Christina as much weeks ago. The other thing he told her is that those background stories she wrote for her job were coming true and influencing real people. Now that we know Charlotte has rebranded Delos as Olympiad, the same company Christina writes for, it makes sense. Christina does write for a game. The game is just a giant theme park. It’s reality. It’s Charlotte World. It’s everywhere.

What we learned from Gangster World is that Charlotte didn’t spend much effort drafting new stories for her hosts. She told the same stories with different names. If reality is her new theme park, then there’s no reason to suspect her modus operandi has changed. Christina is Dolores, and that’s why she falls into all the same loops. She drops her lipstick for Teddy to pick up, she finds the maze everywhere, she wears blue and prefers beauty to violence. She’s Dolores not just because there is some immutable truth to the character (after all, Charlotte is Dolores too) but because Charlotte is still just recycling old West World content. However, West World didn’t have prewritten stories for humans to play out, and that’s what Charlotte needs. She has to script the humans, who are the real NPCs in this world. So it makes she’d give that job to… herself. Or a version of herself who cares.

There’s a pivotal scene where Christina’s roommate (Ariana Debose) wakes her up, and two things happen. First, the roommate recites a nightmare she had about going on a picnic with her parents when she was little and then, uh, flies attacked them, and it was so real! Because it probably was! It was a memory! Then the roommate looks at the painting Christina spent all night on — a cityscape with an image of The Tower roughly drawn on top — and Christina asks her a very familiar question: “Does it look like anything to you?”

That phrasing! In West World, when a host encountered something from the outside world, something that would break the illusion of their reality, they were programmed to ignore it. To literally not see it, and say “It doesn’t look like anything to me.” What’s more important than the fact that her roommate deflects the question is that Christina phrased it that way to begin with, because — as we see at the end of the episode — The Tower is unavoidably right there. It’s looming off the coast of Manhattan like an effed-up Statue of Liberty. There is no reason Christina or anyone else shouldn’t recognize it, unless they’ve specifically been programmed to ignore it. And of course Christina, being a total Dolores about it, is starting to break from her programming and become self-aware.

As for Teddy? We know Charlotte owns the servers for the Sublime, but given Bernard’s interaction with Akecheta it seems Host Heaven is still free from her influence. So either she finally hacked the program and has released all that host data into the real world, or… she just used the old West World data to make copies of the characters. Because that’s what she does, recycle the content!

Does this mean we’re just… not giving Maeve a sword again?

Finally, let’s talk about that weapon reveal. As soon as we saw Maeve get buried in the desert, it was pretty clear she’d be that secret weapon Bernard was talking about. She can manipulate machines! She’s really handy in a fight AGAINST MACHINES! If anything, I’m just not sure why Charlotte would pull Caleb out of that demo site and not snag Maeve too. Is Maeve too dangerous to contain, or too dangerous to be left lying in the sand for a few decades where any ol’ human could trip over her?

Mostly, though, props to the show for this evolution of the character. I’ve always said I enjoyed Westworld more when Thandiwe Newton got to swing a sword around, and now they’ve basically made her the sword. Only four more episodes this season to see if they’ll give the sword a sword and make all my dreams come true.

← How Much of Starz's 'Becoming Elizabeth' Is Based on a True Story? | 'Desus & Mero' Is Done Just Like Their Friendship →