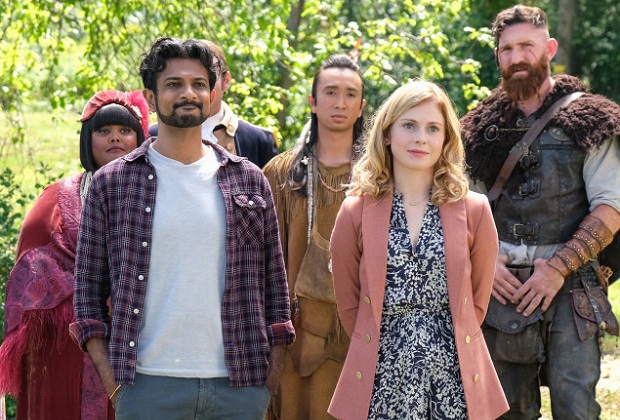 — Dwayne Johnson found a lot of success teaming up with two superhero actors, Gal Gadot and Ryan Reynolds, in Red Notice, so while he’s waiting for Rawson Thurber to pen the sequels for Netflix (and while Double-R is on an acting hiatus), Johnson has decided to team up with another superhero actor, Chris Evans. The two will star in Amazon’s action flick Red One (no relation to Red Notice) for director Jake Kasdan (Zero Effect). Plot details are thin, but Deadline describes it as “a globe-trotting, four-quadrant action-adventure comedy imagining a whole new universe to explore within the holiday genre.” Four-quadrant action-adventure comedies are actually fairly rare these days — at least those that aren’t associated with existing IPs — so I’ll take it!

— I guess the success of Disney+’s John Stamos series Big Shot (about a successful basketball coach who is canceled and has to coach a girls’ high-school basketball team) and The Mighty Ducks reboot have inspired NBC to merge the two ideas into its own series. Milo Ventimiglia will star in Hometown Saints, a television show that THR describes as such: It centers on “Billy Riedell, a retired hockey player who struggles to figure out who he is now that his career is over. He ends up back in his hockey-crazed Minnesota hometown, reluctantly coaching a girl’s high school team.”

— I’d never watched the Tom Hanks Da Vinci Code movies, nor had I ever read a Dan Brown novel, but last year, I decided to check out Dan Brown’s The Lost Symbol on Peacock. I managed to watch three episodes of one of the most excruciatingly awful television shows I have ever seen. Not only was it boring beyond measure, but the lead actor, Ashley Zukerman (Succession), was incapable of saying anything to anyone without it sounding like a condescending, man-splaining jackass. Awful show, repugnant character, and I feel confident in saying it was the worst scripted show of 2021 because I also watched The Walking Dead: World Beyond. Peacock, blissfully, has pulled the plug on the series after one horrendous season.

— On the other hand, CBS is already starting to renew series for next season giving the green light to another season of Ghosts, The Neighborhood, and Bob ♥ Abishola. I don’t care about the latter two, but I like Ghosts more than I probably should.

— Elsewhere, after extending The Goldbergs for another four episodes this year, ABC had no place on its schedule to put its midseason replacement comedy Maggie, so Hulu has acquired it. It stars Rebecca Rittenhouse (the Four Weddings and a Funeral series), who plays a young woman trying to cope with life while coming to terms with her abilities as a psychic.

— Finally, here’s the trailer for Joe vs. Carole that Peacock series about The Tiger King starring Kate McKinnon and John Cameron Mitchell.