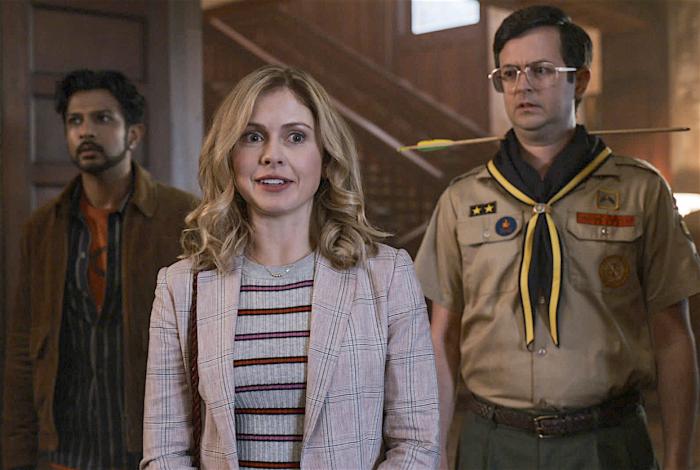 Please Don't Rake Me Over the Coals, but CBS's Reboot of 'Ghosts' Isn't Bad

I will, however, apologize for upsetting the purists who are no doubt yelling, “Why would you remake a show that’s already perfect?” or something similar. I’m sorry! But also, not that sorry because Rose McIver is a joy in CBS’s Ghosts, and while the premise has the potential to grow stale very quickly if the ghosts themselves aren’t more fully formed, I have found the first three episodes enjoyable in spite of what I assume is a pale imitation of the original.

In Ghosts, freelancer Sam (Rose McIver) and chef Jay (Utkarsh Ambudkar), a married couple, move from the city and into an expansive old fixer-upper that Sam inherited from her recently deceased aunt. The idea is to renovate it and turn it into a bed and breakfast, but the ghosts who inhabit the place aren’t wild about having their afterlives disrupted by an endless succession of guests. Their ability to haunt the house, however, is limited by the fact that they are ghosts, and aside from knocking over the odd object, their efforts are futile.

No matter, because after Sam falls down a flight of stairs and suffers a head injury, she gains the ability to see and communicate with the ghosts. The ghosts thus become something akin to a chorus of roommates who can walk through walls and act as a peanut gallery to Sam and Jay’s disputes. These ghosts include a Viking (Devan Chandler Long), a douchey ’80s Schmidt type (Asher Grodman), an anti-colonial Native American stereotype (Román Zaragoza), a late 18th-century closeted gay man stereotype (Brandon Scott Jones), a hippie stereotype (Sheila Carrasco), a 1920s flapper type (Danielle Pinnock), a Proper Lady of the House type (Rebecca Wisocky), and a poor man’s Mark Proksch (Richie Moriarty), who has an arrow in his neck.

The flat characterization of the ghosts, so far, is the comedy’s weak point, although there are a lot of them and it may take some time to flesh them out. The third episode, for instance, is largely devoted to the Viking character, Thorfinn, whose bones are discovered in the yard. He requests a Viking funeral for his remains under the belief that he will be “sucked off” (or allowed to move onto the next world) after he’s been properly fêted. I expect that subsequent episodes will center on individual characters who wish to use Sam and Jay to appropriately process their own deaths while the couple continues the home renovations.

The premise obviously has a lot of potential because the BBC version is beloved, although the CBS version will likely outnumber in terms of episodes the three seasons of the British comedy in its first year. The third episode of the CBS series is the first to break with the source material, and it’s not as good as the first two episodes. Still, despite the difference in premise, the sense of humor and tone of Ghosts reminds me of New Girl, only there are considerably more roommates. The series, not so coincidentally, comes from Joe Port and Joe Wiseman, writers on the old Fox sitcom. McIver sans the iZombie make-up also approaches the role with the same sense of wide-eyed naivete and easy dismissiveness with which Zooey Deschanel approached Schmidt, Winston, and Nick. McIver is very good, and Ambudkar — as the obligatory hapless husband — isn’t bad, either.

Probably the best compliment I could give to the series is that it doesn’t feel like a CBS sitcom, although it does still feel like a network sitcom. Decent ones are increasingly rare in the streaming era, and sometimes 22 minutes of light entertainment is exactly what’s called for in between episodes of You and Succession. But then again, what do I know? I’m a terrible person.


← Watch: One Second Of Screaming From Every Episode Of 'It's Always Sunny In Philadelphia' | 'Cowboy Bebop' Live Action Series News: A Little Teaser Action For All You Space Cowboys →