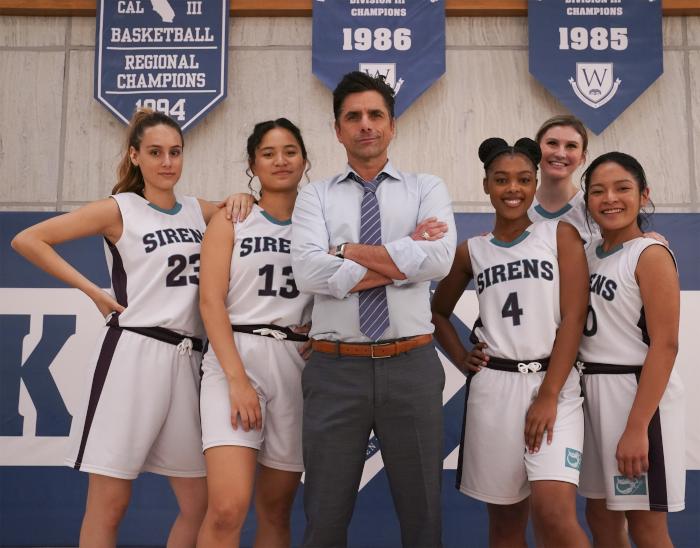 I started watching both The Mighty Ducks: Game Changers and Big Shot on Disney+ because they both felt like easy ins to the world of sports for my nine-year-old twins. I’ll admit, however, that I have continued to watch them both all season because I have genuinely come to enjoy them. Good family shows that kids like and that don’t leave parents to suffer are hard to come by, and for similar reasons, both of these series fit that bill.

Evan (Brady Noon) and Alex Morrow (Lauren Graham) are the entry points into Game Changers. Evan opens the season playing for the same miracle Ducks that Gordon Bombay (Emilio Estevez) revived back in The Mighty Ducks movie, but now the Ducks have become what Bombay used to hate: They’re an arrogant, cutthroat team that has sapped all of the joy out of hockey and put winning above all else. That extends even to the parents, who are using the Mighty Ducks hockey team as a way to get their kids into Ivy League schools.

Evan, alas, is cut from the team in the pilot episode because he’s not good enough, and so his mother — in an effort to lift his spirits — agrees to form and coach a new team, which they call the Don’t Bothers. Naturally, it is a collection of misfits and nerds, some of whom have no hockey skills whatsoever. Every ice rink in the city, meanwhile, is too booked to accommodate the Don’t Bothers for practice time, so Alex has to resort to using a dilapidated hockey rink in a seedy part of town. It just so happens to be owned by Gordon Bombay, the disaffected old coach of the Ducks, who has since been disowned by the organization. He’s in a dark place, he hates hockey, and he despises what the Ducks have become.

The series progresses roughly as one might expect — there’s a season-long underdog arc that pits the Don’t Bothers against the villainous Mighty Ducks, and episodic underdog stories, mostly centered on specific misfit characters finding their way on the team, with their parents, or in school through lessons learned from hockey. Gordon Bombay obviously gets more involved with the team, and there’s even a blossoming romance between him and Alex. It’s all very sweet and uplifting, although there have been a few episodes where Lauren Graham’s heart doesn’t seem to be in it. The kids, however, are uniformly great, and it’s fun to see Emilio Estevez basically age into his father.

Big Shot, meanwhile, stars John Stamos as Marvyn Korn, a cross between Mike Krzyzewski and Bobby Knight. He’s a legendary college basketball coach who lost his job after throwing a chair at a referee during an angry outburst. He’s trying to build his way back up through the only job he can find: As the coach of a Division III girls high school basketball team. It’s a fancy prep school in California, which ironically allows the series to better tackle socioeconomic issues.

Big Shot is more grown-up than Mighty Ducks, but it’s following a similar underdog formula while serving weekly character stories. The team learns how to be better players, Coach Korn learns how to be a better person, and Yvette Nicole Brown — who plays the principal — steals all the scenes she’s in. Glee’s Jessalyn Gilsig is also here as the assistant coach/possible love interest. The themes here are also a little heavier than Ducks — it tackles social-media shaming, social anxiety, the death of a parent, and there are some romantic relationships (including same-sex couplings. On Disney+!). It’s nothing, however, that I would find unsuitable for nine or ten-year-olds.

Likewise, the high-school cast is very good, while Stamos is surprisingly effective in what’s really more of a dramatic role, albeit one in a family-friendly show. He and Gilsig have great chemistry — platonic, romantic, or otherwise.

Neither of these shows are “necessary” viewing, by any means, and I probably wouldn’t watch Mighty Ducks if I didn’t have kids of my own. But with or without kids, it’s nice to settle in each week knowing that you’re going to get a couple of well-acted, well-written, crowd-pleasing, feel-good episodes of television.


← What's the Deal with that Photo on 'Mare of Easttown'? | Let's Look Back on This Horrific 'Unsexiest Woman Alive' List from 2007 and Learn a Few Lessons →