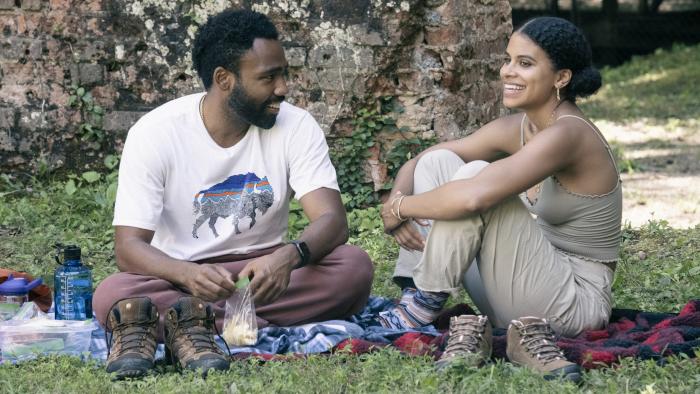 Previously on Atlanta: A serial killer has been targeting people who have recorded and posted YouTube videos of themselves dancing to “Crank That” by Soulja Boy back in the day. Unfortunately for Paper Boi, he also recorded a YouTube video of himself dancing to “Crank That” when he was younger, and he starts wondering whether he’s next on the killer’s list. Meanwhile, Earn and Darius are on the hunt for some hard-to-find Nikes and they end up crossing paths with a sneaker reseller who has exactly what they’re looking for … and they come with a price that has nothing to do with money.

THE STORY SO FAR: Earn, Van, and Lottie spend the weekend together at a campground in the woods to celebrate Lottie’s sixth birthday. The trip also results in Earn and Van deciding whether or not Van will come to Los Angeles with Earn so he can continue pursuing his career as a talent manager, and also confronting how the two of them truly feel about each other, and if there is any future for them as a couple.

WHAT’S GOOD ABOUT THIS EPISODE?: The fact that this episode begins and ends with the music of Sade, and that it’s two of the band’s greatest songs: “Your Love Is King” and “Love Is Stronger Than Pride.” The look on Van’s face when she finds out from Earn how gigantic their tent is supposed to be, enough to hold a dozen people. Earn and Van standing back to look at their handiwork and realizing that they did not do the most impressive job of assembling the tent. The stunning-as-usual cinematography, and this particular episode set in the woods, with certain shots and angles giving off a more-ominous-than-usual vibe, makes it feel at times like a horror movie made by A24. Van telling Lottie that the two of them are going to go on a ‘snipe hunt’ when it’s nightfall. (“It’s this really rare creature. It’s nearly extinct. And it only comes out at night when the moon is outer edit’s really crazy long, and it has red eyes, and only the coolest and the smartest can catch it.”) Earn jokingly expressing doubt to Van about snipe-hunting, and how it sounds like something that a lynch mob would do when going after Black people. Simply seeing the three of them spending time together in the woods, as they fish, enjoy a picnic, and converse with one another. Particularly when Lottie, who isn’t in the best of moods during this camping trip, expresses how she misses her grandparents, and Van inquiring further as to whether she is wishing they were here with them for camping, or if she just misses them altogether.

Lottie performing the ‘snipe hunt’ on her own with a stick and a pillowcase, since Van tells her that snipes won’t appear if there are too many people around. Van seeming very reluctant to discuss whether she wants to come with Earn to L.A., which leads to Earn calling her out on it (“What’s so great about Atlanta that you can’t leave it behind?”), and Van expressing her doubts as to why Earn wants her to come with him in the first place. (“I’m afraid that it’s about you not wanting to be alone when you go there, and that you’re scared of that, and I’m…not just your security blanket.”) Earn and Van both being very shocked when Lottie announces to them that she has caught a snipe in her pillowcase, and Earn inching closer and closer to inspect what Lottie actually caught, which turns out to be a … well, I can’t really say what it is, but it’s something that hisses really loudly and darts out of the pillowcase, which causes Earn to freak out and scream in fright as he falls to the ground. Lottie not wanting to hear any singing from Earn and Van as she blows out the candle on her birthday s’more. (Which is probably something that Barbara from Abbott Elementary needs to be told more often before performing her ridiculously extra and longer-than-I. Ron Butterfly’s “In The Garden Of Eden” version of “Happy Birthday To You” for her students) Earn admitting to Van in their tent that even though he’d have no problem finding another woman to be with in L.A. so that he doesn’t have to be alone, it is not what he wants. What he really wants is to be with Van, and for the two of them and Lottie to be a family. (“I’m fighting for you, Van. You know me, I don’t fight or anything…I love you.”) Van responds by telling him that she can’t just leave Atlanta and pack up her entire life just because Earn only loves her as the mother of their child.

This causes Earn to get up from where he’s sleeping, and position himself beside Van to respond:

Earn: “Do you think I just see you as Lottie’s mom? Do you not realize how…how in love with you I am? How much I think about you? I’ve dreamed about you every night since Amsterdam. I do see you as a woman. I still want you. I desire you. When I think about the fact that you’re also the mother of my child? I could just fucking burst. I’ve never felt that way about anything. I wasn’t able to feel that before. And I’ll love you forever because of it, no matter what. I mean, what else are we doing this for, if not for that feeling? What else is there? You know what I mean?”

Van: “I do. It’s a little … Kanye being passionate, but I do know what you mean.”

Followed by the two of them exchanging “I love yous” as they climb under the same blanket together so that Earn can stay warm.

The final shot of the episode, in which Lottie can’t help but smile as she sees her parents talking to one another as they leave the campground and drive back home, almost as if her birthday wish was for her parents to get back together so that they could all truly be a family. (Of course, that’s a theory. I could be wrong.)

WHAT’S NOT SO GOOD ABOUT THIS EPISODE?: Nothing that comes to mind, in all honesty.

ARE PAPER BOI AND/OR DARIUS IN THIS EPISODE?: No, and no.

ANY PROBLEMATIC MALE CELEBRITIES SHOW UP IN THIS EPISODE?: Fortunately, no.

HOW MANY F-BOMBS WERE THERE IN THIS EPISODE?: One, when Earn expresses to Van how amazing their daughter is, and she truly is the best of both of them.

ON A SCALE OF 1 TO “WHAT THE HELL DID I JUST WATCH?,” HOW WEIRD AND TERRIFYING WAS THIS EPISODE?: Three, as it wasn’t nearly as terrifying as I thought it would be. I was convinced that this episode of Earn, Van, and Lottie camping together by themselves in the woods was going to take a disturbing turn and that the ‘snipe hunt’ would end with Lottie catching a baby Predator or something along those lines.

ANY TIME-TRAVELING ALIENS IN THIS EPISODE?: No, and if you really want to talk bout time-traveling aliens, then you should really be discussing Doctor Who instead of Atlanta, especially after the former’s most recent episode that just aired, which I’m not going to spoil in case you haven’t watched it yet.

TO SUM IT ALL UP: Not a lot happens in ‘Snipe Hunt,’ and it’s easy to assume that because of its setting that Atlanta will veer once again into familiar territory of black comedy and horror. But clearly, the episode has bigger things in mind, and it’s Earn and Van being open and honest with each other while discussing Earn leaving Atlanta behind to work in L.A. The last time there was an episode that really focused this much on their relationship, or lack thereof, was back in the Season 2 episode “Helen,” when Earn and Van butted heads over her wanting to be in a committed relationship where she’s treated as a human being and not just as someone for Earn to f-ck whenever the need arises. Earn couldn’t and wouldn’t admit to wanting more, because of his emotional immaturity, and because casual sex between the two of them was more than enough to satisfy him. Judging from everything he said to Van about his love for her, and his desire for them to be together so they and Lottie can be a family, that is no longer a problem for him. Whatever doubts that Van may have had about how Earn sees her and how he feels about her were pretty much silenced by seeing and hearing him pour his heart out to her (and even shedding tears while doing so, which makes her shed tears as well), and we can only hope that this is for real, and that no major hurdles come up anytime soon that will change this.

I also hope that Earn and Van have other things planned for Lottie’s birthday celebration, as taking her to a desolate campground away from her friends and her grandparents, and with very little to do, and no gifts to open up? That will put any six-year-old child in a foul mood.

This isn’t just one of the best and most beautiful episodes of the series, but one of the best and most beautiful episodes of any series. Seeing Earn open up to Van, and Van willing to let him in, has me rooting for them in a way that I haven’t rooted for a couple on television since…well, two weeks ago when She-Hulk took Daredevil back to her apartment so they could hook up. (Laugh if you want to, but the chemistry between Tatiana Maslany and Charlie Cox in that whole episode was downright incredible, and when Jennifer convinces Matt to come back to her place immediately instead of possibly meeting up again for dinner in the near future, I damn near cheered while raising my fist in the air like John Bender at the end of The Breakfast Club.)

Only two more episodes until the series finale, and according to The Futon Critic, the next episode, which is titled “The Goof Who Sat By the Door” is about “An in-depth look at the making of the American classic, A Goofy Movie.”

Yes, you read that correctly, and no, I’ve still never watched A Goofy Movie (go ahead with your judgmental-ass comments, it’s what I deserve), so I definitely look forward to seeing how this actually turns out.

“Love Is Stronger Than Pride” also by Sade…”

And “Stronger Than Pride” by Marsha Ambrosius.


← Just All the Best Liz Truss Memes, Because It's Still Hilarious | 'The Peripheral' on Prime Video Is Short on Story, But Boasts a Solid Cast →