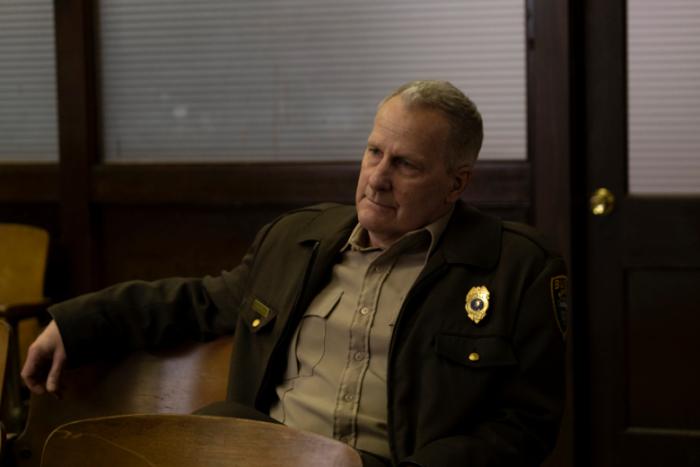 There’s something about these grim prestige dramas set in the backwoods opioid dens of America that I find strangely comforting in the sense that — for so many of us suffering from anxiety and depression, worried about the state of the world and our own situations within it — things could be worse. We could be trapped in Buell, Pennsylvania living in a dilapidated trailer home, working a menial job with no security, watching while friends and family members die from drug overdoses, and seeing absolutely no way out.

Misery loves company, as they say, and there’s nary a show more miserable right now than Showtime’s murder mystery, American Rust, a cheerless drama that may scratch at that Mare of Easttown itch, but hardly enough to bring relief.

Jeff Daniels plays Del Harris, a small-town sheriff in Buell, a Western Pennsylvania town near the West Virginia border. He’s hooked on a lot of (legal prescription) drugs himself owing to PTSD he suffered during his military service. He’s loosely romantically involved with a local seamstress, Grace (Maura Tierney), who occasionally backslides with her ex-husband and father of her child, Virgil (Mark Pellegrino).

Grace’s kid, Billy (Alex Neustaedter), is a troubled but talented high-school football star, who apparently turned down an offer to play at a Division I school for reasons that, so far, are vague, though likely has to do with a fear of leaving Buell. He’s friends with Isaac (David Alvarez), a depressed and suicidal teenager left behind by his sister, Lee (Julia Mayorga), to take care of their father, Henry (Bill Camp), whose health is severely compromised. Billy, meanwhile, is still in love with Lee, who left Buell for New York, where she recently got married, while Isaac is so distraught over his lot that Billy has to save him after he intentionally falls into an icy lake.

The circumstances surrounding these characters are already grim enough before the murder of a cop, Pete Novick (Jim True-Frost), is introduced. He’s found face-down in an abandoned mill, and there’s some evidence that Billy is involved, evidence that the Sheriff hides because he wants to look out for his girlfriend’s kid.

That’s the setup, and boy is it grim. The series, even in the pilot episode, moves at a snail’s pace, and while Daniels, Tierney, and Bill Camp are all very good, very capable actors, the drama so far lacks the kind of spark that Kate Winslet, Jean Smart, Evan Peters, and Julianne Nicholson brought to Easttown, not that Rust won’t invariably merit an Emmy nod or two. These characters, however, seem to be walking through the motions, which is consistent with the types of people who might populate a town like this. They’re resigned, and the anxiety they feel because of it has settled in as background noise.

It’s a wallow-in-your-misery kind of show, but also a murder mystery. It has not, however, given us much reason to care about the deceased — the only interaction we’ve had with Deputy Novick, so far, is not a favorable one. Daniels plays a Daniels character, only on the other side of the socioeconomic spectrum. He’s very good at delivering monologues, which is good because American Rust is the type of series to feature a lot of them. They break up the monotony of listlessness and give us something to focus on besides the vacant eyes and grim expressions that otherwise dominate the series.

That may sound like a pan, but it’s not, exactly. American Rust is a fine show for what it wants to be — a bleak series based on a bleak Philipp Meyer novel that — like Easttown — is very detailed about its bleakness; there’s a rusty pick-up truck in nearly every frame! Unfortunately, while it is suitably heavy, it’s not yet as engrossing. There’s no plight here that we feel particularly invested in after one episode, while the murder mystery itself lacks a compelling hook. But oh boy, I can already tell Rust is going to deliver a number of sermons on the economically disadvantaged, on those the American economy has left behind, and those who have been exploited by the pharmaceutical industry. That just so happens to be my particular cup of tea, which means I’ll wallow in it until the bitter end, although I understand that this kind of series is not for everyone. There are far less painful ways to pass the time.


← 'Malignant' Review: A Self-Aware James Wan Gets Zany | Review: Argentine Horror 'To Kill the Beast' Brings the Tropical Gothic to the Big Screen →